My introduction to downtown was in the early 90s’.  We had recently moved to LA from Israel, for Joel it was moving back, for me it was a whole new world.  Our first year here I started taking classes at LA Valley college, a wonderful local community college. I then enrolled at FIDM and set out studying textile design. That is a subject for  a different post.

FIDM had just completed their lovely new building, so I found myself going downtown a few days a week. I stayed very close to the campus. I would venture to the Fashion District and even got a part time job there.  But in those days, downtown was still very sketchy. So I never ventured far.

How things have changed, today I am a downtown docent with The LA Conservancy and I love exploring on my own, which is what I did the other day. I’m sharing some pictures without much information. I know I should get better at both taking the pictures and gathering information.  Meanwhile, just enjoy some wonderful architectural details,  Los Angeles can boast as much as NY or Chicago – we have real beauty here which I am happy to share. 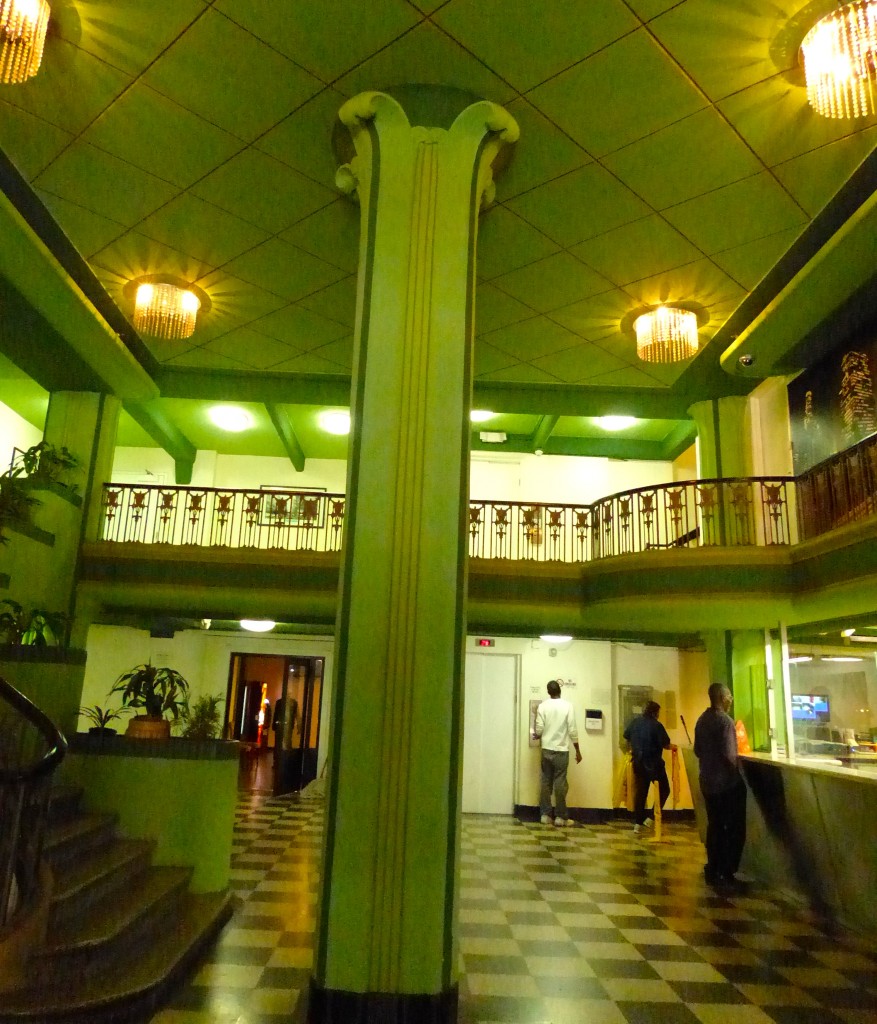 The exterior of this building is on my Downtown Renaissance tour,  since I am doing all the talking I don’t take pictures. I had the opportunity today to enter the lobby.  Today this is a low income building, but as you can see, the owner Izek Shomof takes very good care of his buildings regardless of how much rent is being paid. 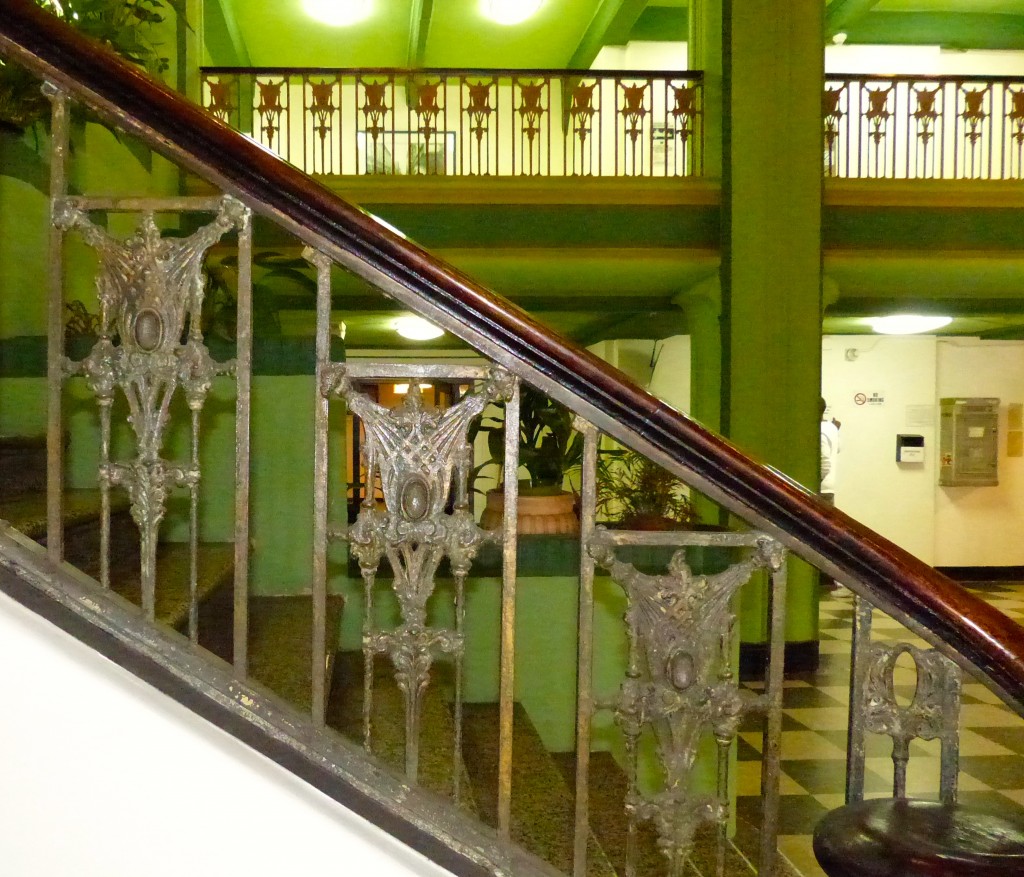 I love the detail on the railing. Hotel Hayward was originally a hotel for traveling salesmen, very close to the PE Trolly station. Even then the cost for rooms was reasonable, but the lobby was very well appointed. 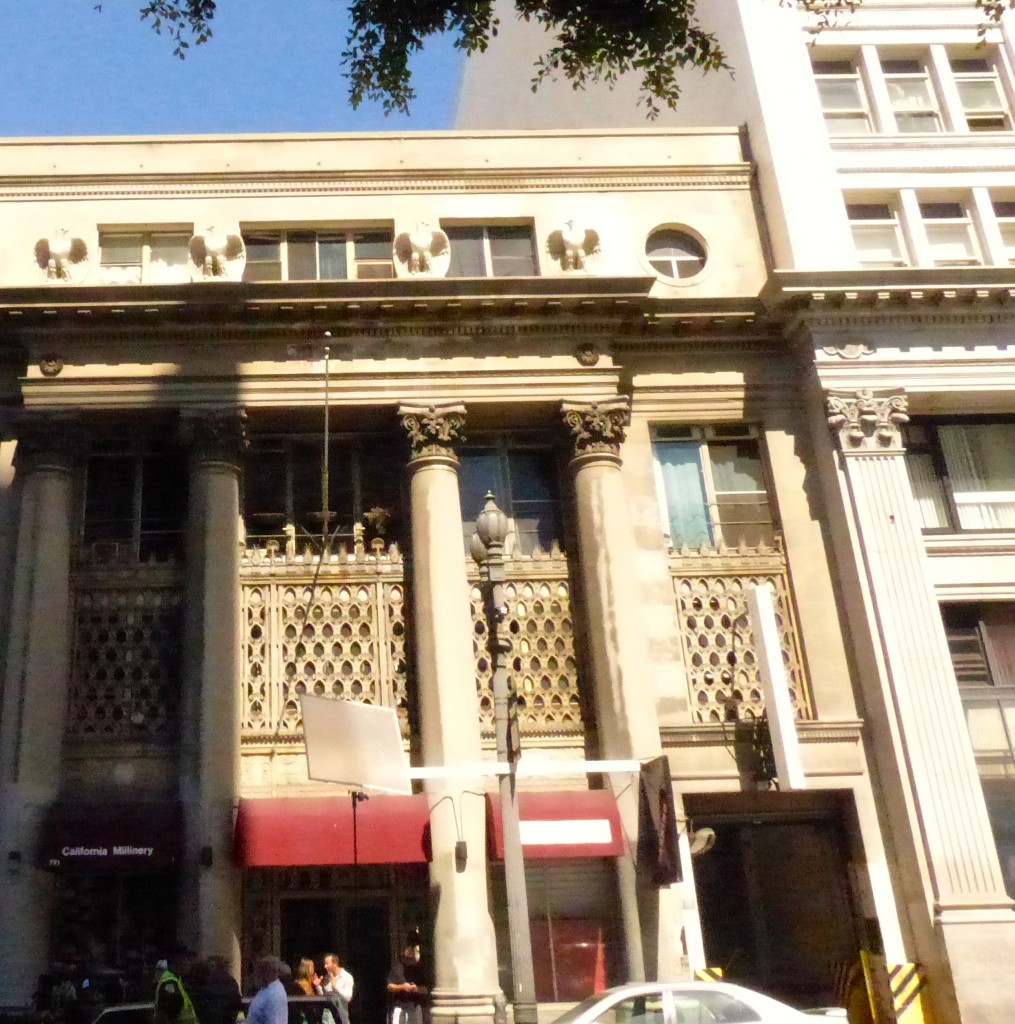 This building is further south on Spring st, someone was filming there. I just love the details. 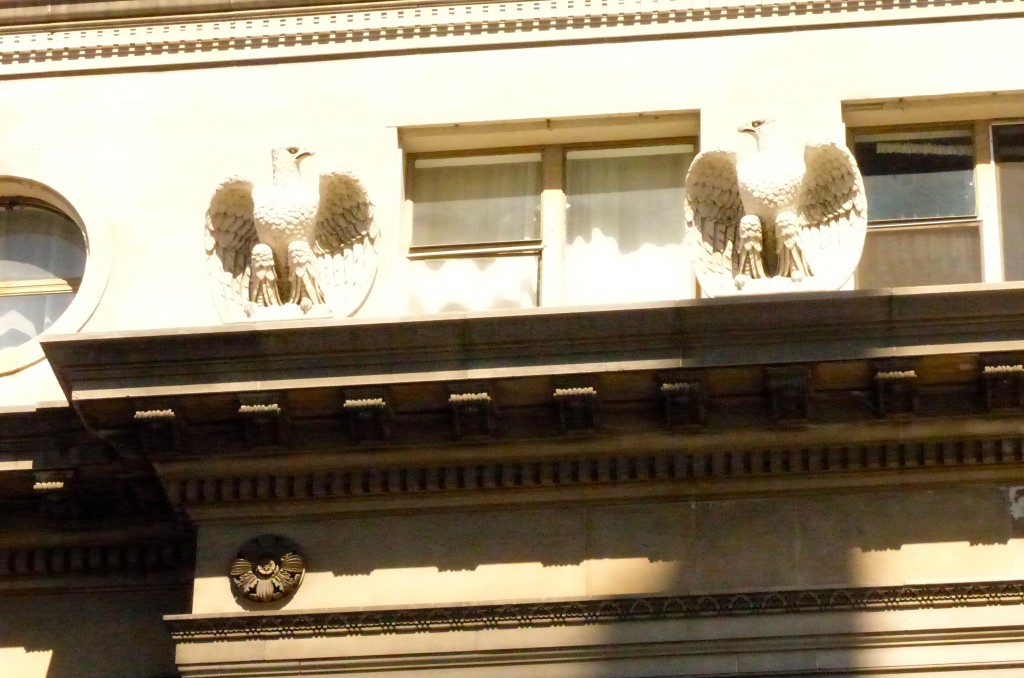 How about these wonderful eagles? 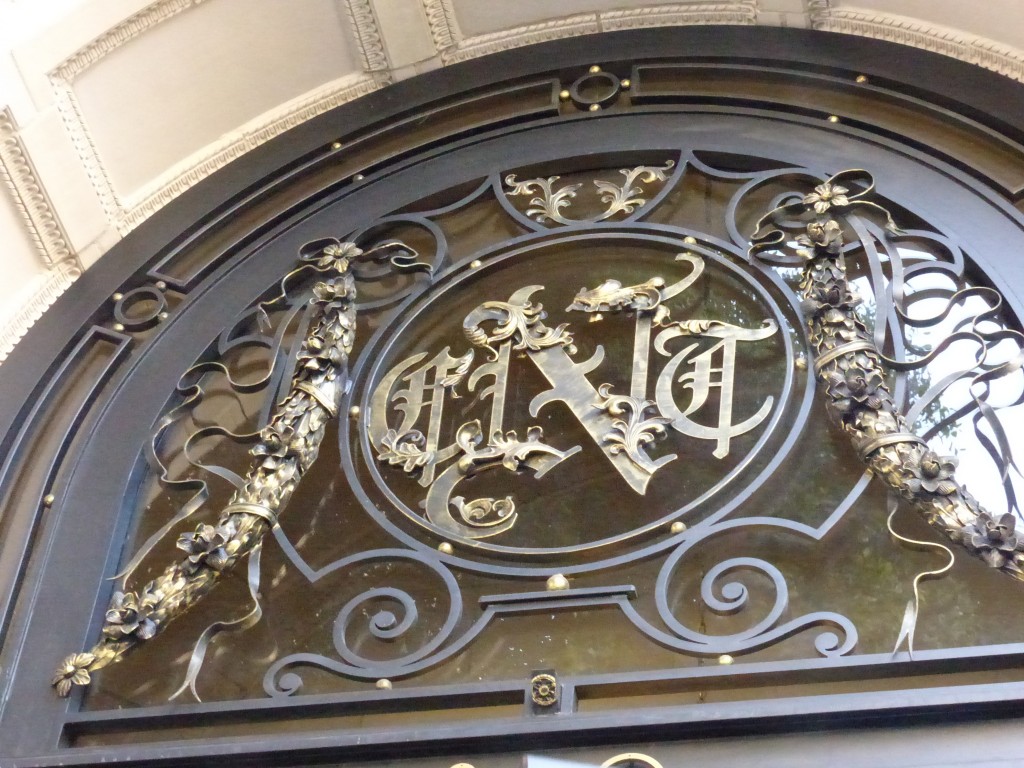 I think the address of this building is 801 Spring st. Spring st and Main st. meet  just beyond this location.  I was capturing the exterior when a young man with a camera exited and he just let me in. 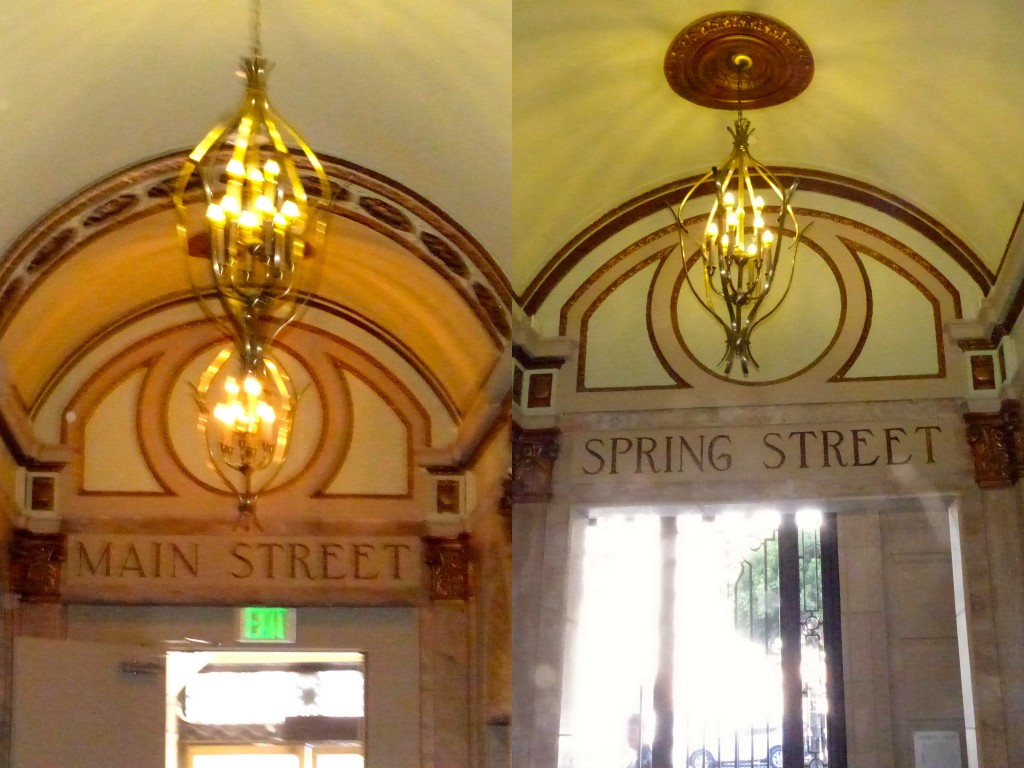 As you can see, the building straddles two streets. Today this is a residential building, the lobby is beautiful and well cared for. 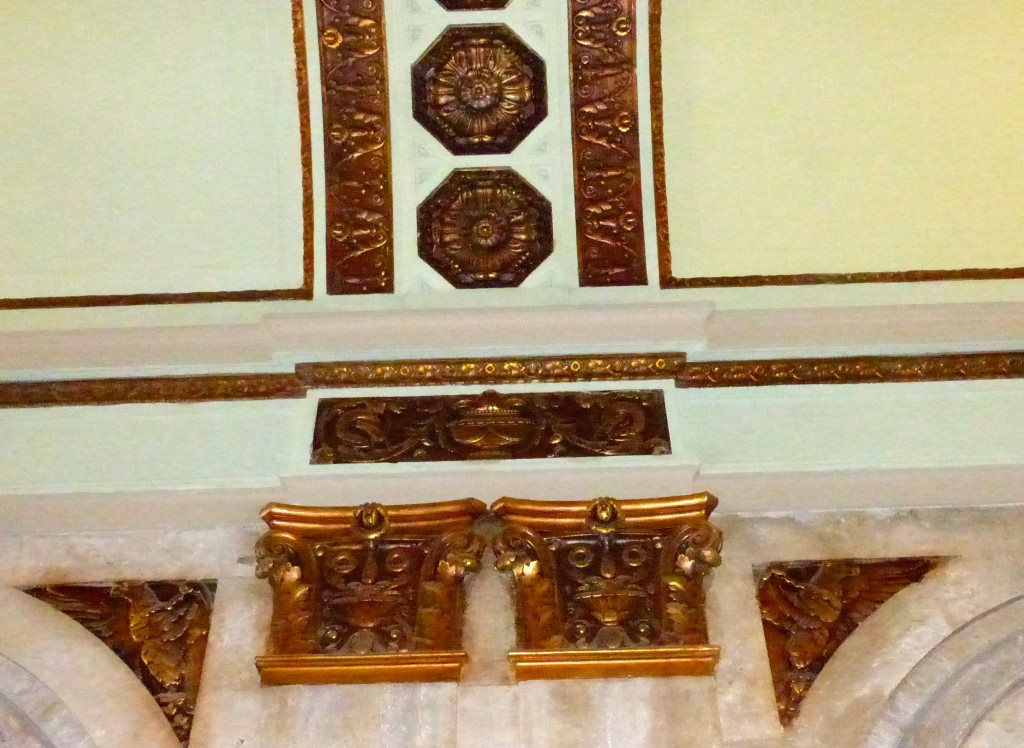 The details on the ceiling are lovely, someone cleaned and possibly repainted them. 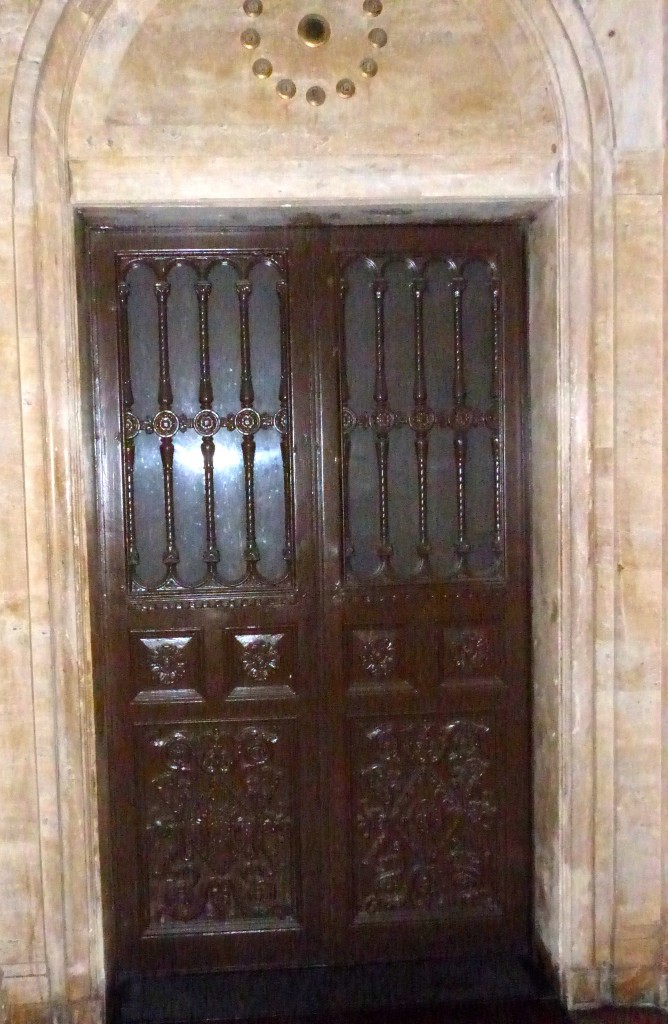 There are three elevators, only one still has the original doors, I don’t know if the car was replaced.  As you can it, it used to have one of those dials that let you know what floor the elevator was on.  I did see that the other two are modern doors, no I didn’t take pictures of them.

That is it for today,  I promise many more in the future.

I am on a mission, to introduce and make the name John Parkinson a household name in Los Angeles. About 5 years ago I went on my first downtown tour with the LA Conservancy, The name John Parkinson kept coming up, it seemed like he, along with his son Donald built many of the wonderful buildings downtown.

I became a docent and soon I was showing off a few of his many amazing buildings. I didn’t know a lot about him, just that he came from England and was a stair builder before he became and architect.  Lucky for us, Stephen Gee, another Brit who moved to LA, had also taken a conservancy tour. He got very interested in this fellow compatriot and started researching. Before you know it he wrote and published this book 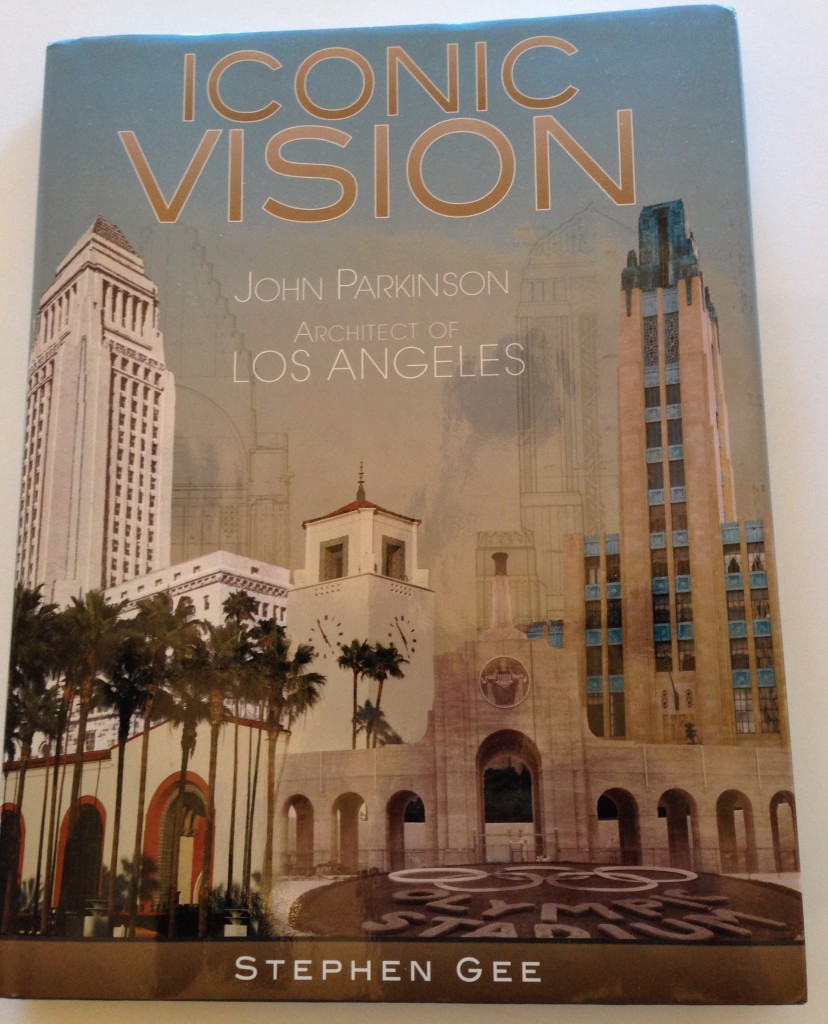 Iconic Vision, Stephen Gee,  I know,  it’s a hard cover book and the cost reflects that, but I read it like a novel. 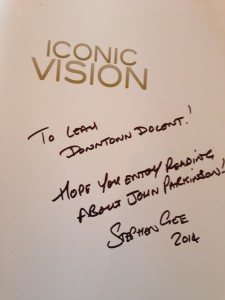 John Parkinson designed our most important buildings in LA, city hall, the coliseum, a large part of the campus of USC, Union station…. I could go on and I will in other posts.  He was largely forgotten, most people don’t know his name.  Due to this book an possibly because his time has come, the city of Los Angeles is setting out to honor him and to make him more of a household name here.

Last year this plaque was put up on the Crocker bank building on the NW corner of Sixth and Spring st. 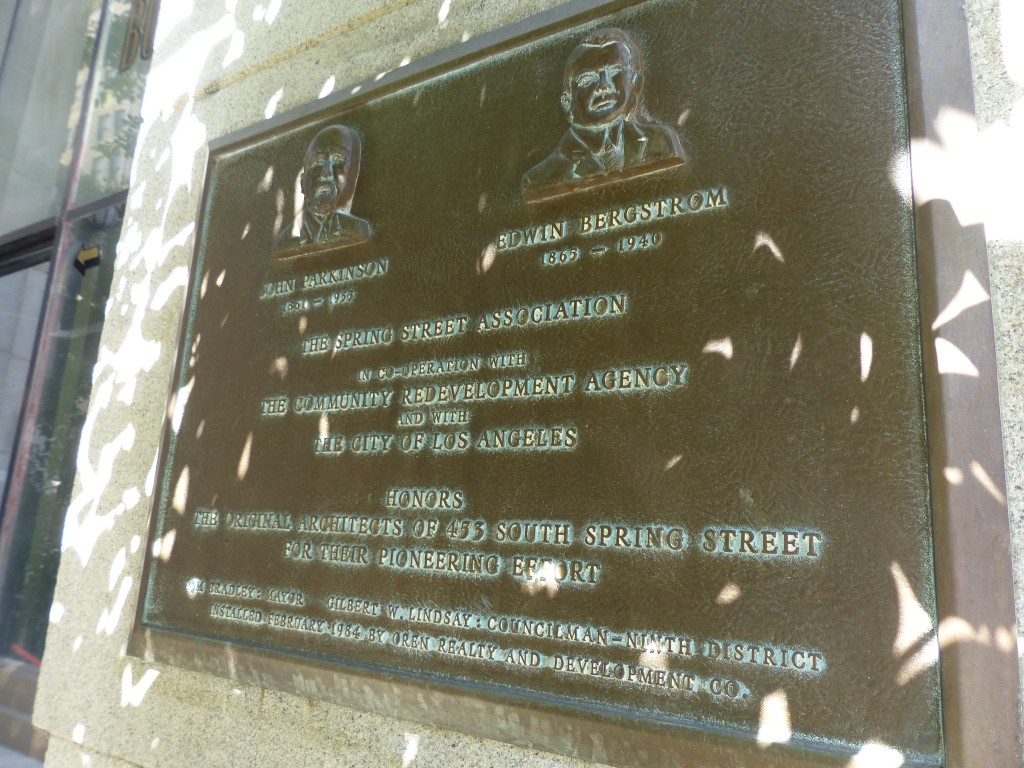 Can you tell its not easy to see this plaque? That is because it is blocked by a Ficus tree. Normally I’m thrilled to see trees downtown, but really, they had to block this plaque?!

So yesterday the city named the intersection of Sixth and Spring st. John Parkinson Square. All four buildings on the corners of this intersection were designed by him.  I went to the ceremony in the Palm Court of the Alexandria hotel. The room has been spruced up. 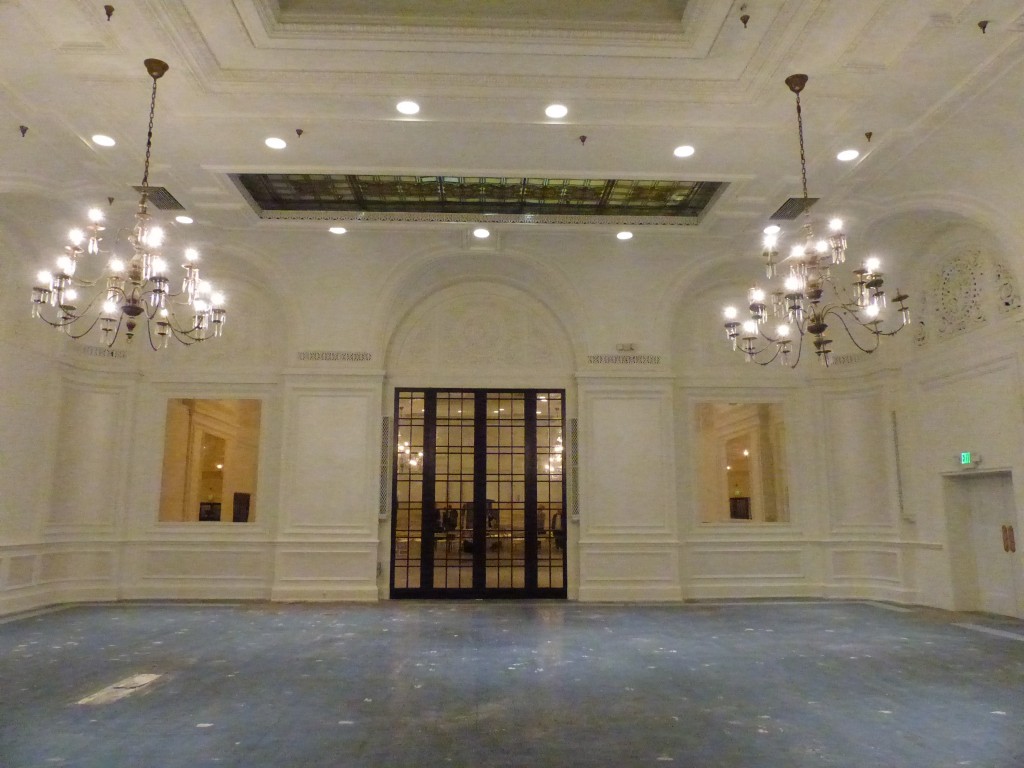 This was a fancy restaurant in the early 20th c. 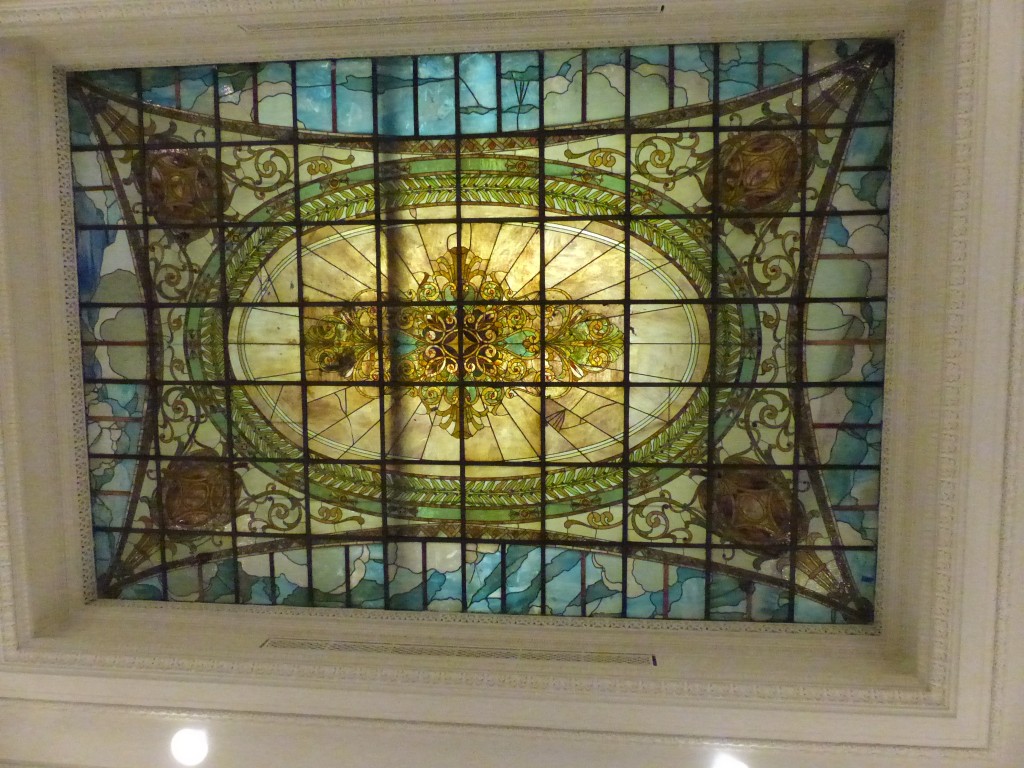 There are two identical skylights as well as the third that is the header for this post. 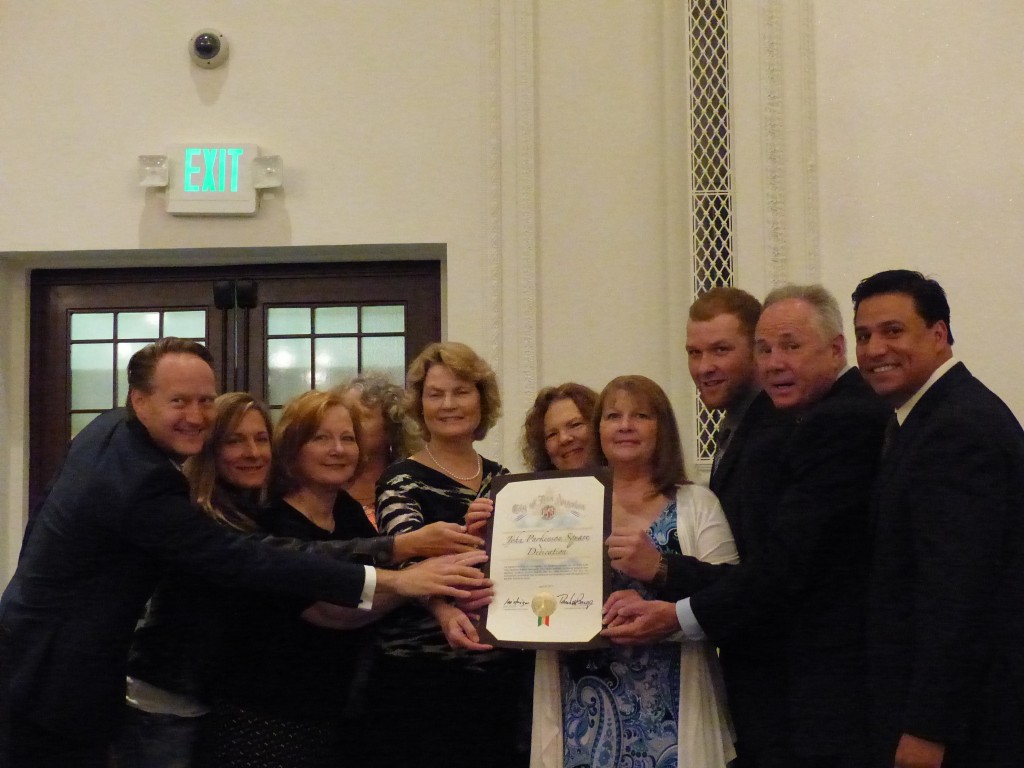 Great-grandaughters and one husband, great-greatgrandson along with city council-members Tom LaBonge and Jose Huizar awarding the certificate. The great-greatgrandson is studying architecture. Most of the family no longer lives in LA,  although one has promised to return, this just feels like home. 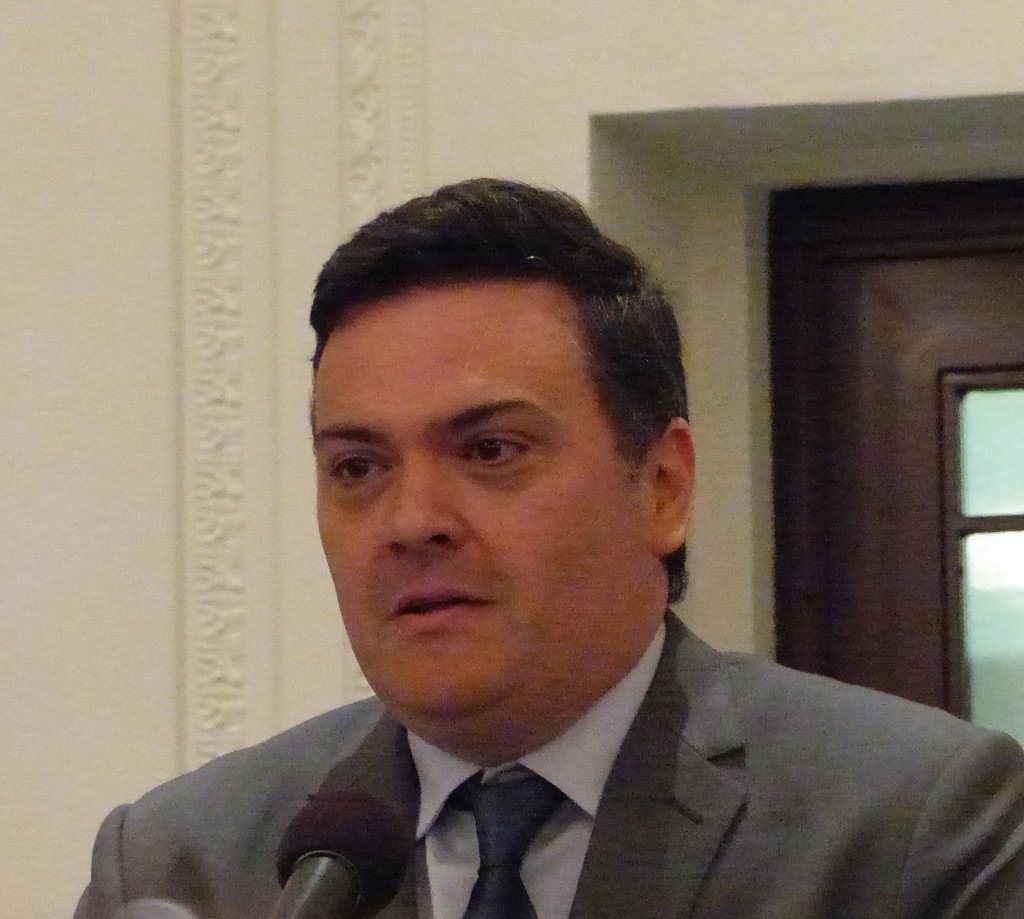 Stephen Gee, who really got the ball rolling discussing the man and his book. 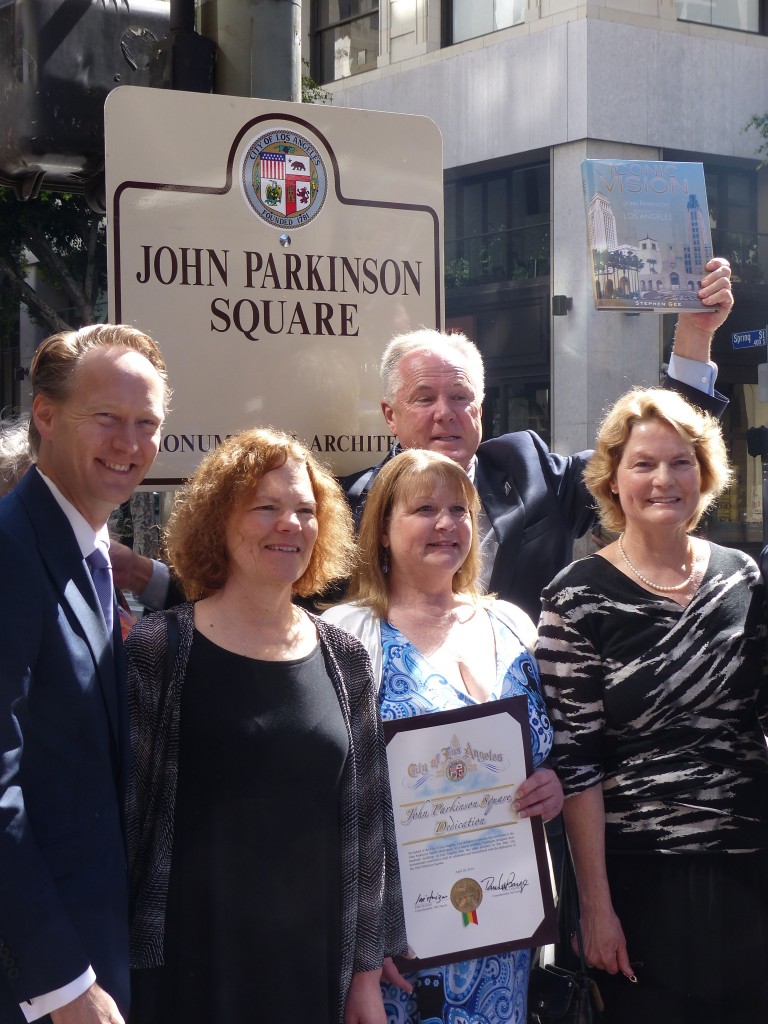 Proud family, proud councilman, and for those us of attending, a very proud happy moment. 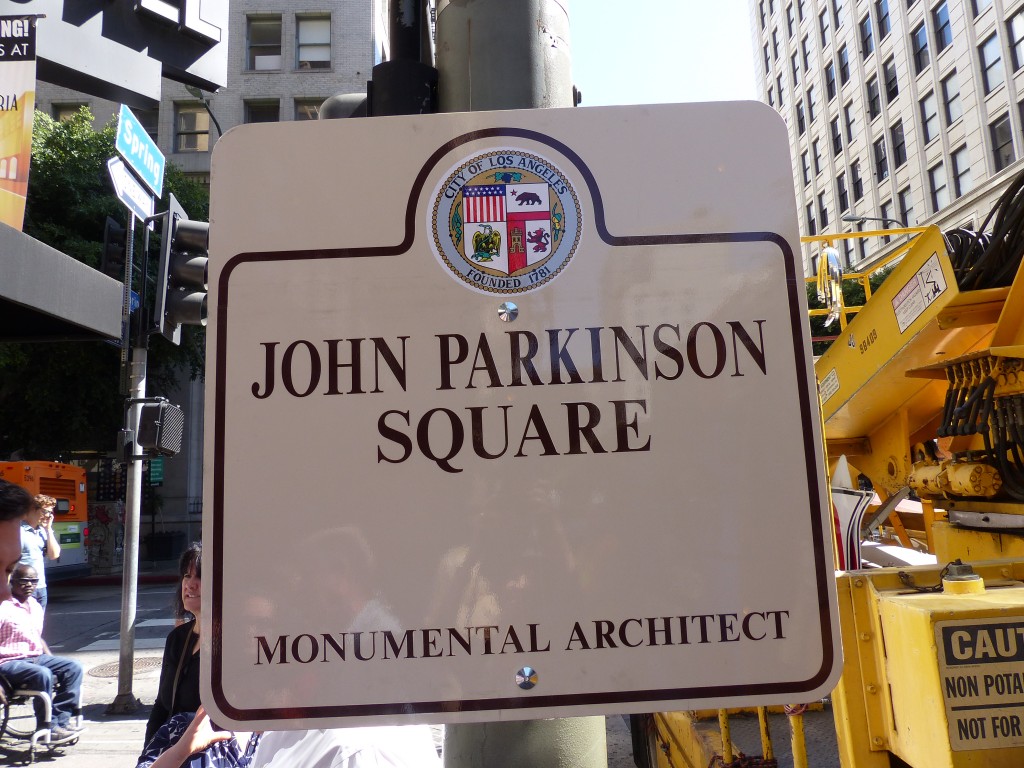 I will be sharing more of his actual work in later posts. Of course I would love it if you came on one of our LA Conservancy walking tours.  I do one a month, so if you want to follow me, make sure to ask me personally. Of course the other docents are wonderful as well, we all share a real deep love for this city.

I always tell people, when walking downtown – look up! There are amazing things to see. While dress shopping on Saturday, I had to stop and take a closer look at this building. With so much cacophony on the street, it’s easy to miss even a building of this size. 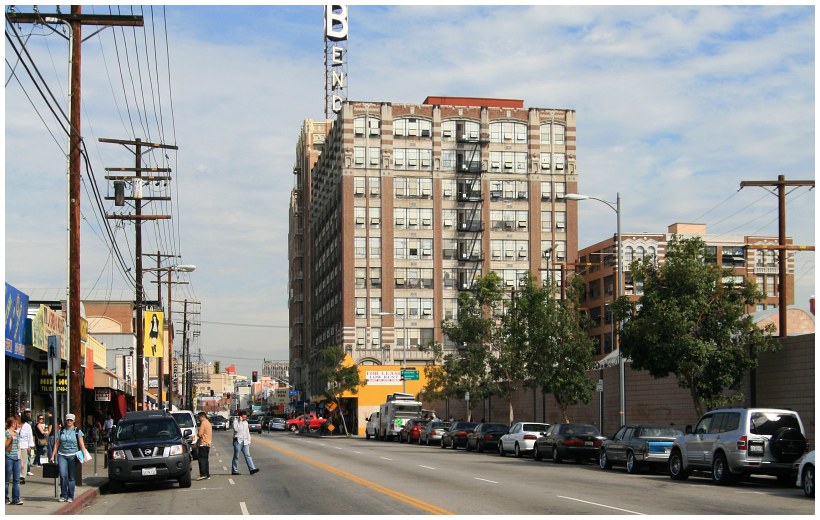 As you can see, most of the area is much lower buildings. So this Beaux Arts and it’s neighbor the Bendix building do stand out. 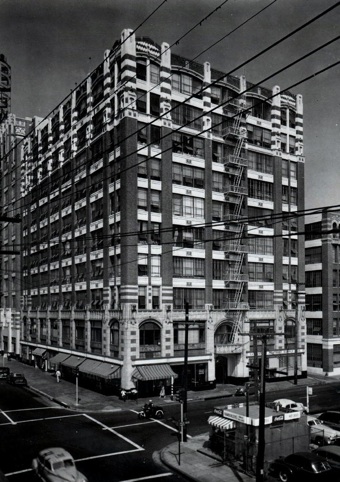 This is a photo from the 1930s. You can see there was retail on the ground floor even then and across Pico Blvd, no high construction.  This was really the outer limits of downtown, from here on there would be other tall buildings, but many more low warehouse and small industry.

As the fashion industry rapidly expended here, the owners are doing just fine renting out large loft style space. They also set about spicing up the lobby. 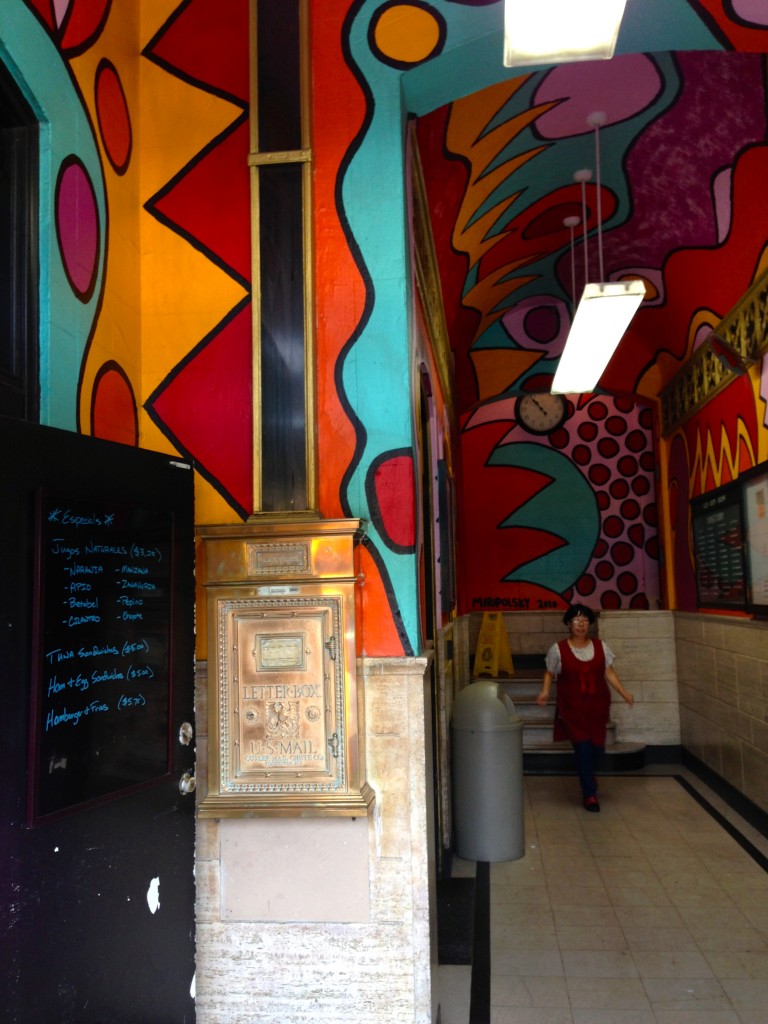 You can see the wonderful old elements that haven’t changed, the marble wainscoting, the wonderful mail box. In  2010, they brought in the artist Andre Miripolsky to add some vibrant color. Boy did he ever. 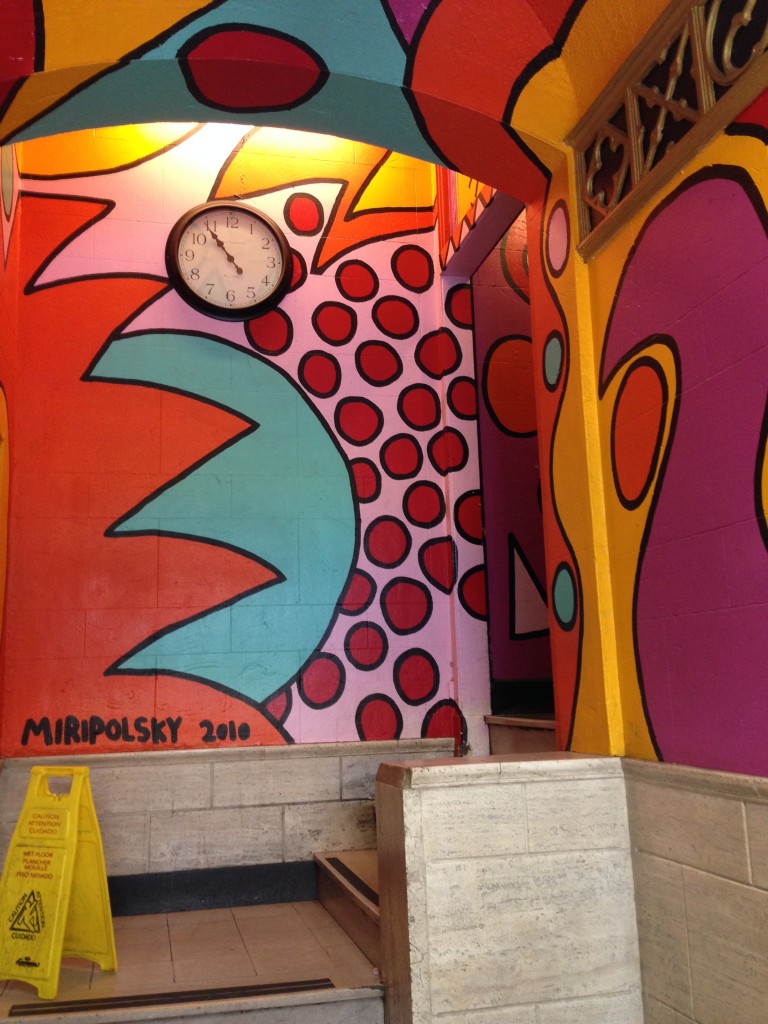 I love how he worked around the old elements, the clock,  The grill. 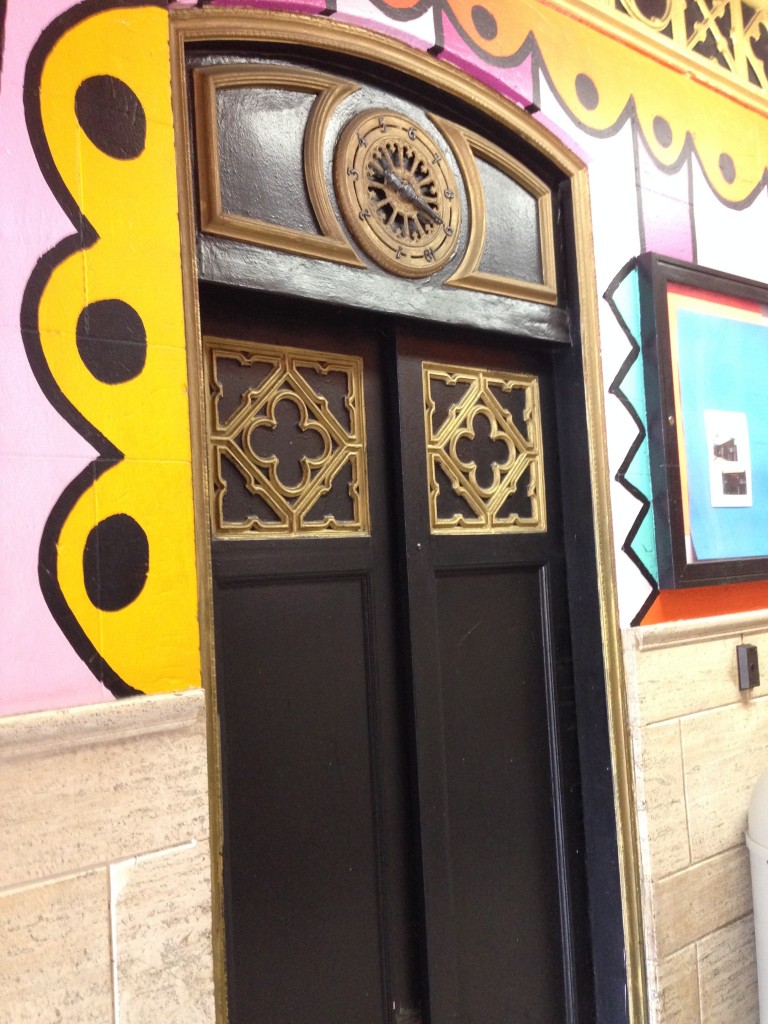 Wonderful old elevator doors. I was able to see into the elevator but not snap a picture. It looked like the original paneling – no fancy materials but nicely decorated wood. And there is an elevator operator – which leads me to think – they haven’t updated this elevator to standard push button yet. Now there is a job you don’t see often, although I’ve seen other buildings downtown with one. 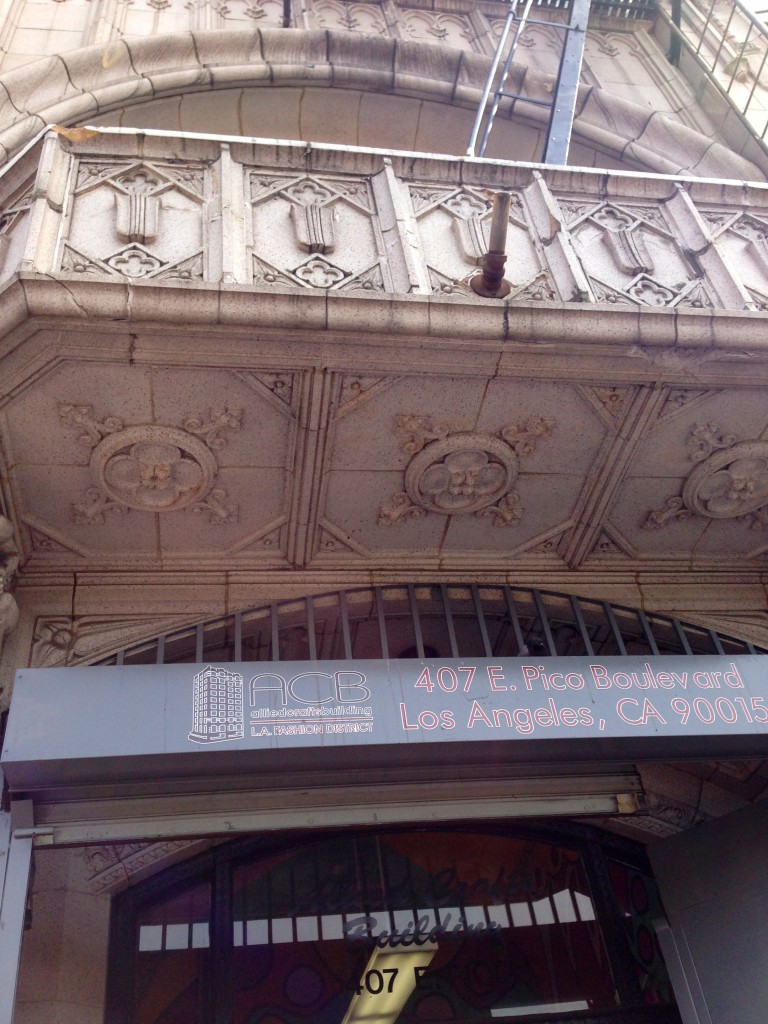 It was hard to isolate out an image like this, so much stuff on all sides.  This  is the balcony over the Lobby entrance, also, the end of the fire escape. 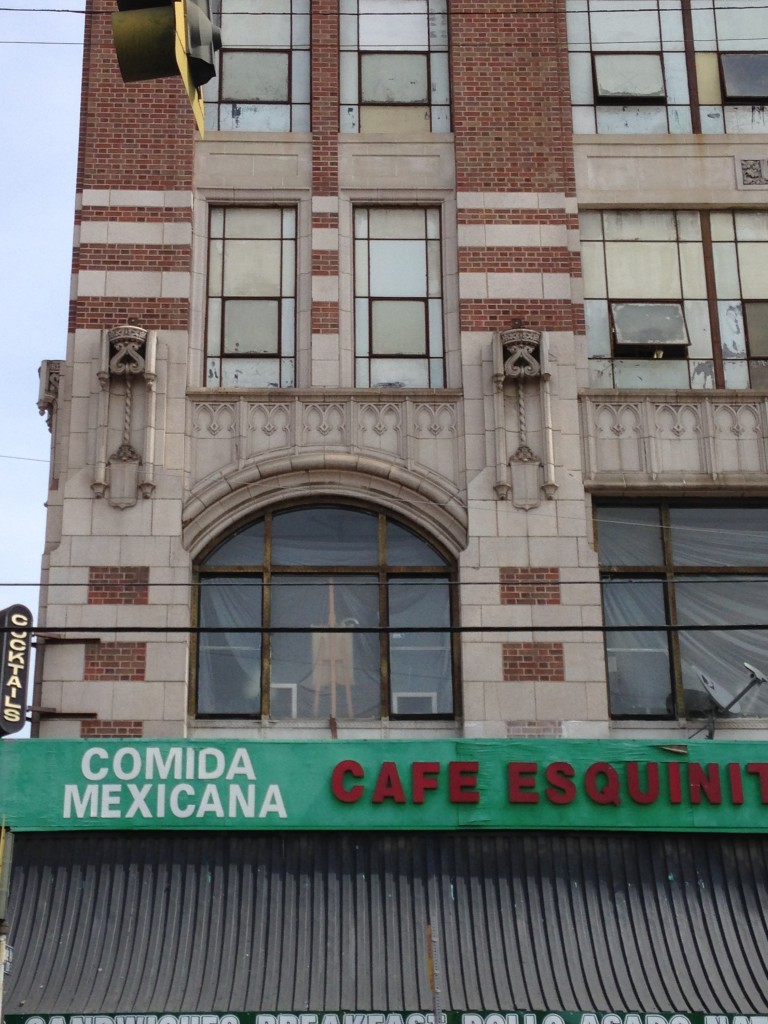 On  a busy shopping trip, I’m sure this restaurant does good business. I love the cocktail sign, I think it was from a previous business. I’m pretty sure there are manufactories  upstairs, they have wide open loft space, although this business looks more like a design studio.

Next door is another very interesting building. The Bendix building.  I shot this image from the rooftop garage across the street where we parked. 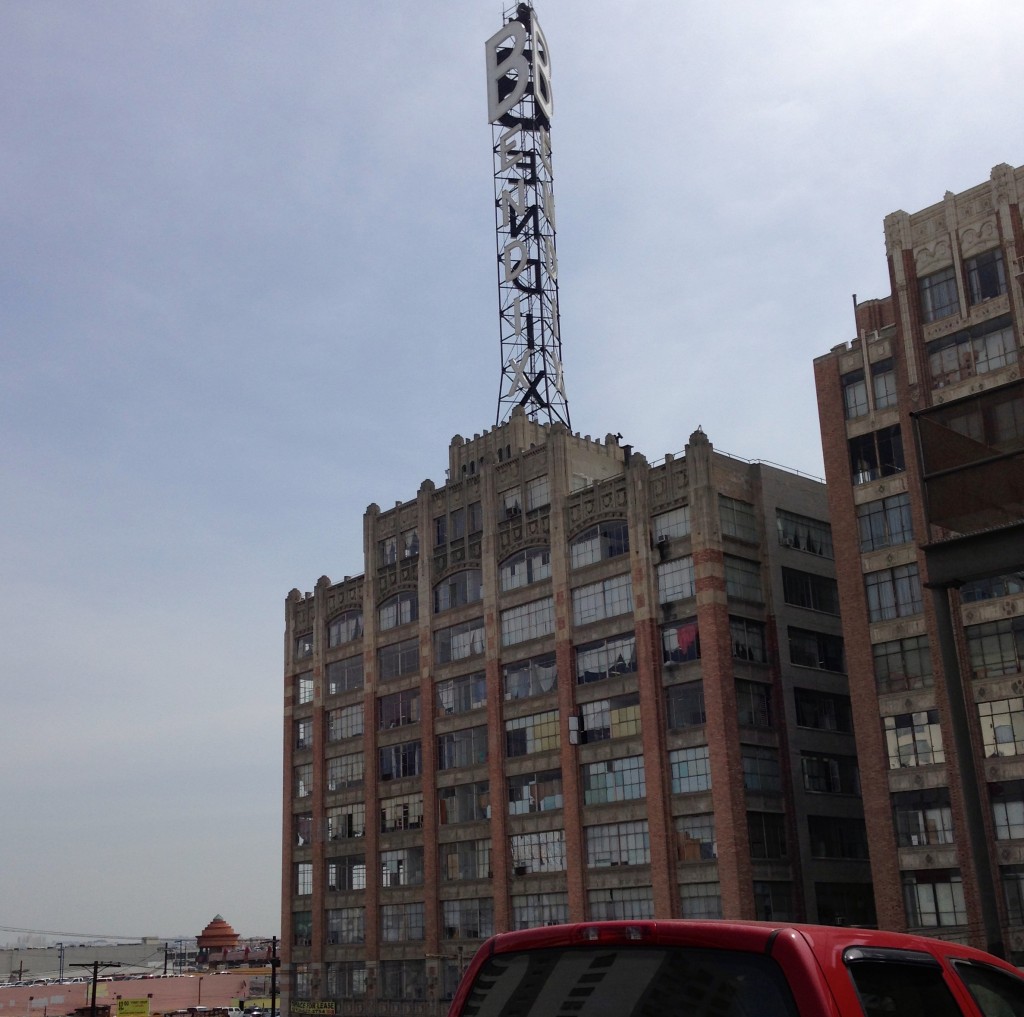 This building was build in 1930.  The tower was built by Bendix Aviation Corporation  manufactured to aid in nighttime aviation. The entire sign stands 150 feet tall; the letter “B” alone is 25 feet tall and 16 feet wide.  This helped light the way to an airfield in Glendale, 9 miles away.  Three years ago the tower was restored and the neon is now lit again at night.

In the 1930’s this building was used to manufacture  automotive parts, navigation instruments and car parts. The fashion industry moved in much later.

Yesterday I was downtown with a friend. We weren’t in my regular stomping grounds, but I knew of a gem of a building that is a must see.

I forgot my good camera so my pictures are from my phone.

One thing I always tell people, when walking on the street, look up! Most of us don’t do that, so when coming across this building, most people don’t notice much.

Look up at the ceiling, also amazing.

For more information about this gorgeous building.

All the tiles in this building were made by:

I am falling in love with California tiles. It makes perfect sense that in a city where homes were built from clay (adobe) there will be a wonderful ceramic tradition, and there is.  Ernest Batchelder has his own unique style, namely – he didn’t glaze his tiles, they don’t shine, he would paint many of them, and seal them.  Notice the ones on the floor by the elevator, color, but no shine.

Many private craftsmen homes have fireplace surrounds with his tiles, in downtown LA, we have amazing examples of his work. This building is one of his largest commercial installations. Unfortunately you can’t go up to the mezzanine level to look down, it is a fully functioning office building these days and yes, the tenants are paying for privacy.