First of all thanks to my friend Becky for taking all these pictures.

A plug for LA Conservancy walking tours, specifically  Downtown Renaissance and Broadway.  It is on these tours that you can visit this treasure.  It is not 100% guarantee, life happens, but you’re best bet is on one of these tours.

What is the Chocolate Shop?  A real treasure in LA. 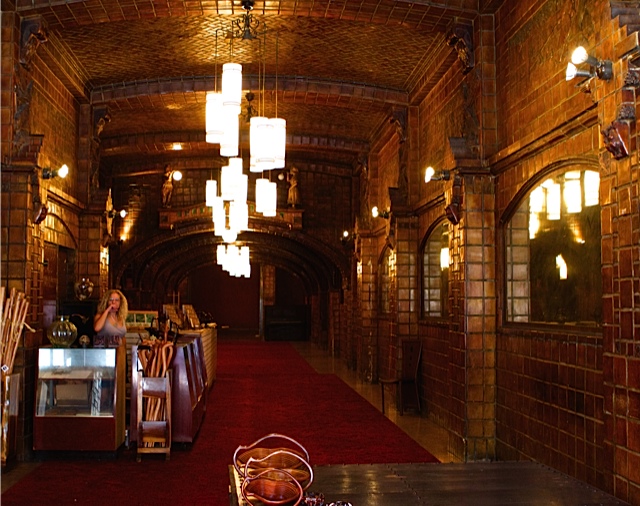 On an average day, walking on the north side of  6th St. from Spring to Broadway, you will see standard downtown businesses as well as some of those roll up metal doors.  Behind one of those door is this treasure.  For years it too was simply another electronic shop. Charles Aslan, a member of the family that owns the building, is the man with a smile who greets our tours and loves showing off the space.

Looking in from the street, can you see how the whole surface is covered in tiles.  Not just any tiles, all are made by Ernest Batchelder. 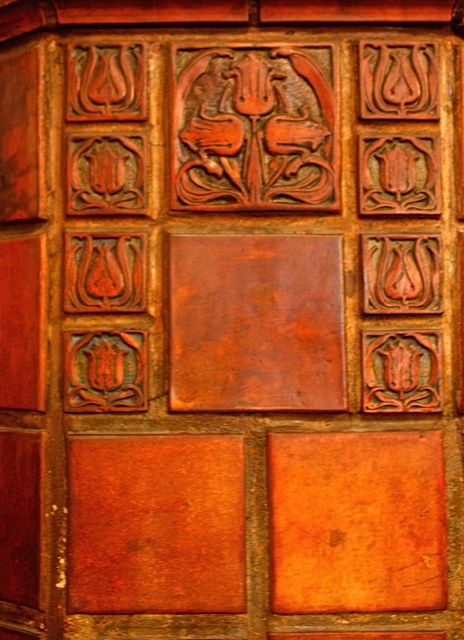 These tiles are very typical of his style –  these are in the Art Nouvaux feel. 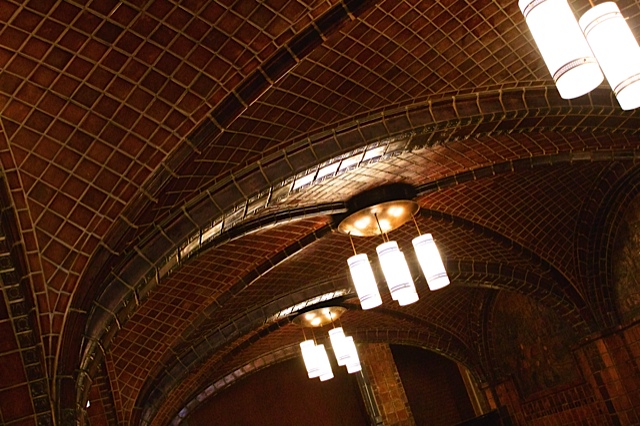 What is very different is the finish on the tiles. They are very dark and somewhat shiny.  One of Batchelder’s signatures was the matte finish on his tiles. He did seal them, but not with a shiny glaze.  The owners of the shop wanted a brown tile, they probably wanted the shine because there are no windows and having the walls and ceiling reflect the light would be helpful. Unfortunately, they shellacked the whole space.  With time the shellack aged, darkened and obscures many of the details of the tile.  This is  a problem art restorers see all the time. 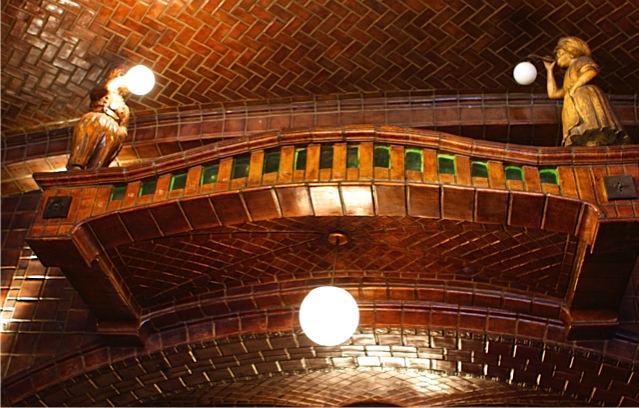 As you enter the shop, you walk under this archway with the two Dutch children blowing bubbles – which are in fact lightbulbs.

In the early 20th The Chocolate Shop Corporation was hoping to be the Starbucks of it’s day. Of course they were going to sell chocolate and sweets.  They commissioned Ernest Batchelder in 1914 to make all of these tiles – which he did. The Chain concept never really got off the ground. In 1922, C.C. Brown opened Brown’s Chocolate Shop here and sold his invention – the chocolate Sundae.  Then in 1928 it became a vegetarian cafeteria and remained so until 1942. For more than 40 years, this was the location of Finney’s cafeteria.  In 1986, after it closed, in went the drywall and the electronic  store came in.

It was during the Finney period, in 1975 that the city of Los Angeles declared the interior a historical cultural monument. 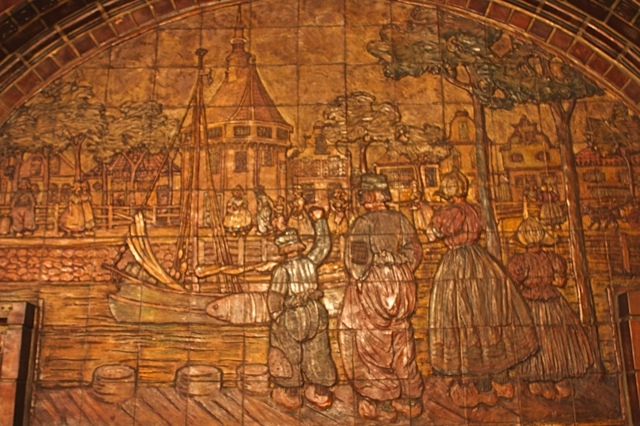 Part of the Batchelder commission was creating these murals with Dutch scenes.  You can see that the tiles were colored, but that shellack is dulling everything. 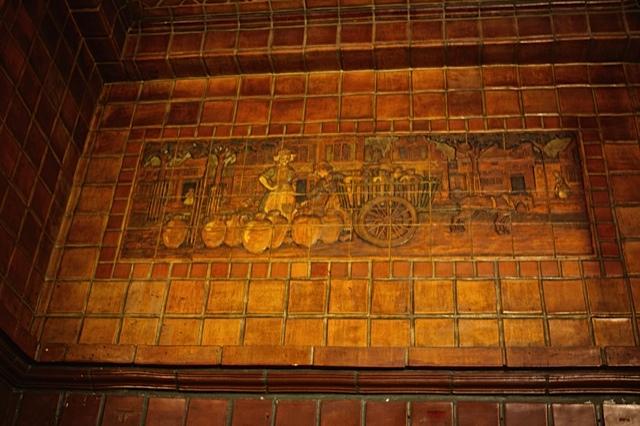 I must commend Becky for touching up the photos, in reality is hard to see this kind of detail, the space is very dark. Sometimes the camera can capture more than the naked eye can see. 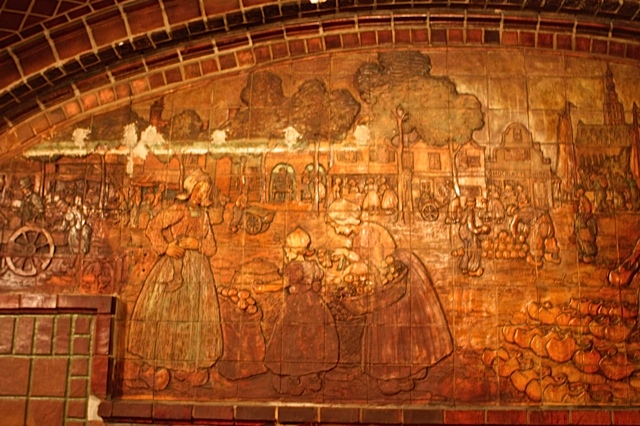 A shelf may have been affixed to the wall here, you can the that not only was the shellack removed but so was the original color.  For all the problems with the shellack. There are a number of tiles where the shellack has been removed. I hope it stops there because all that remains is a dull fired tile. This is a problem all art conservators have – sometimes you can’t get back to the original intent – so better to stay with the added layers than lose everything. 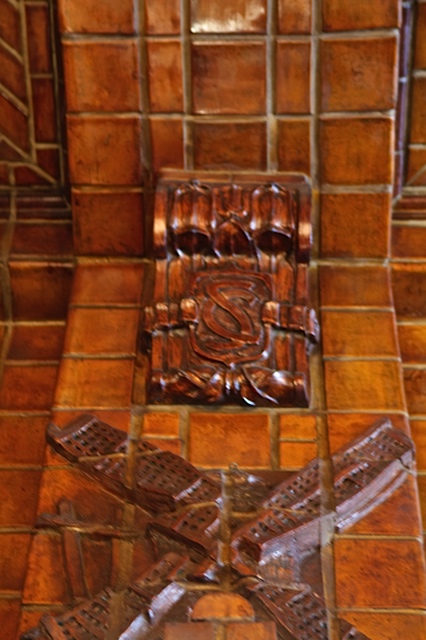 A wonderful close up of a windmill. 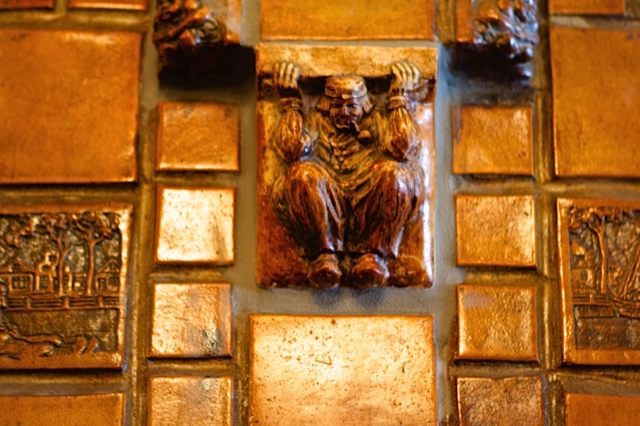 Dutchman in the role of gargoyle, holding up the lintel about him. 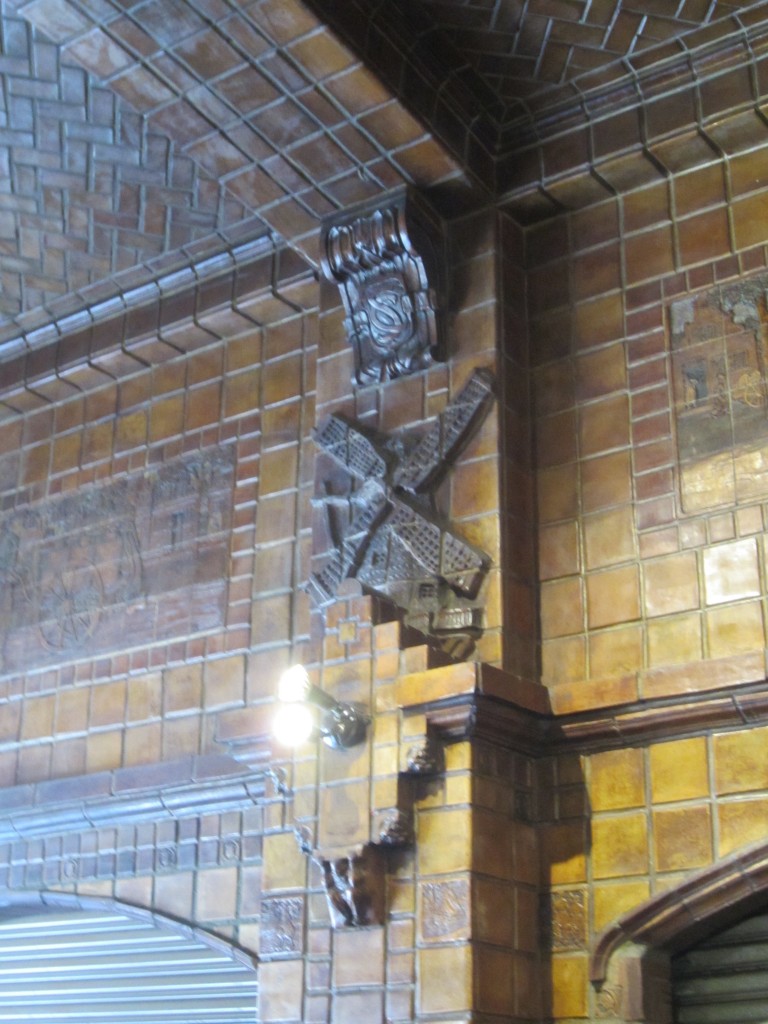 The detail work is incredible. I just love the different ways of laying tile on the ceiling and the walls. Here you see the top of the pier with it’s many decorations. Also, this is the one picture I took, you can see the difference in quality.

Charles Aslan is fighting to get permission from the building at the rear of the shop to open up an additional exit. This would open up on the Spring/Broadway arcade. Different building, different owners. They are not interested. Charles cannot turn this into a viable coffee or chocolate shop without that additional exit.  So it is not clear what will happen.

My advice is get on either the Broadway or Downtown Renaissance tours soon.  This treasure may soon be hidden again behind the metal door.  Being a cultural monument is very nice – but with the many players involved, it may be a hidden one.

At my son’s wedding I had the pleasure of meeting a lovely young couple who live downtown. They were very gracious and invited me to come see their apartment in a wonderful old building on Spring St. 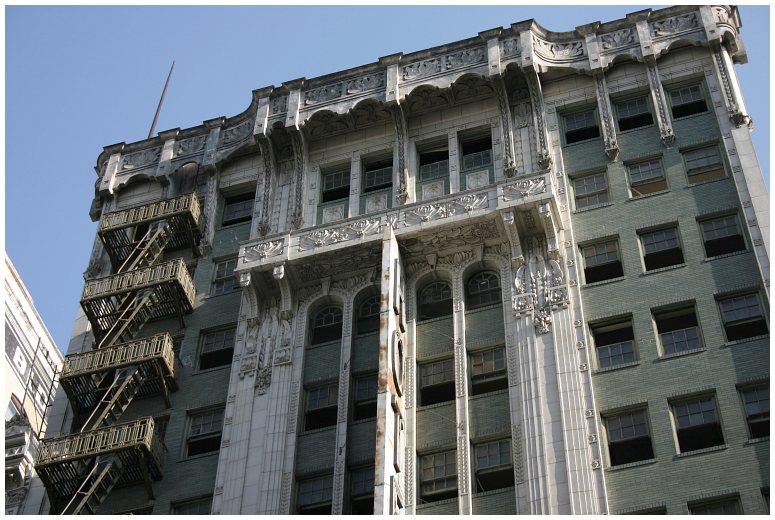 Here is an image from the 1980s’ before the building was renovated. There used to be a blade sign in the middle of the building which is now gone. 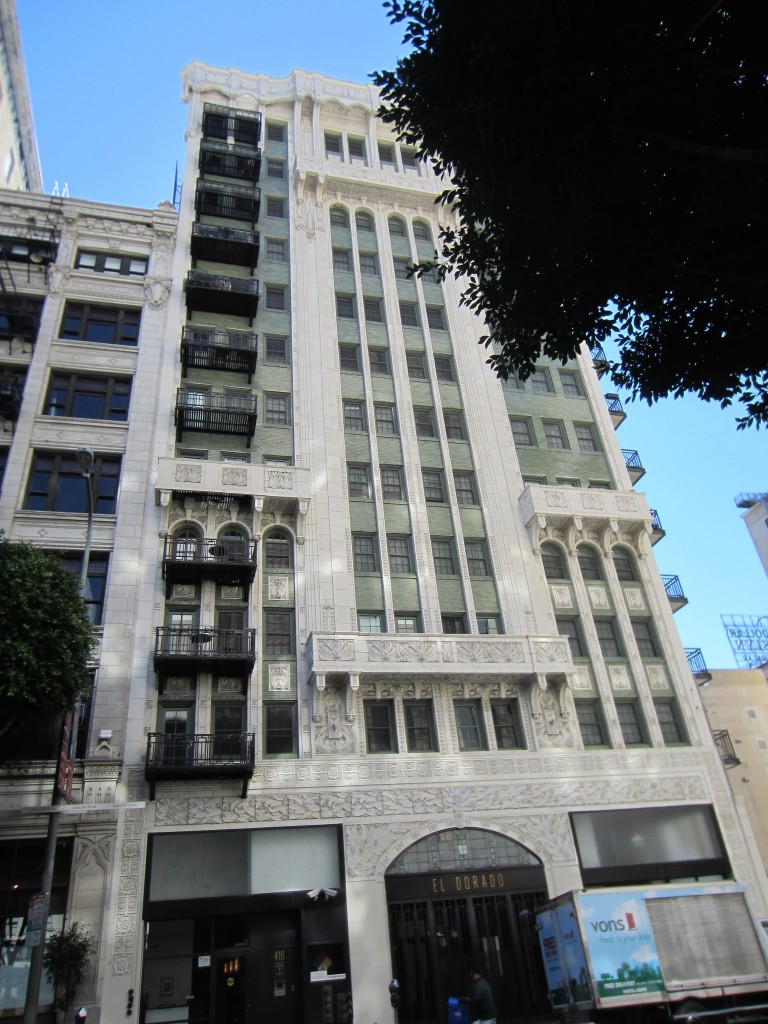 Here is the renovated exterior, the fire escape was removed, and the platforms became balconies.  On the south side of the building, they broke through, added windows and balconies as well. 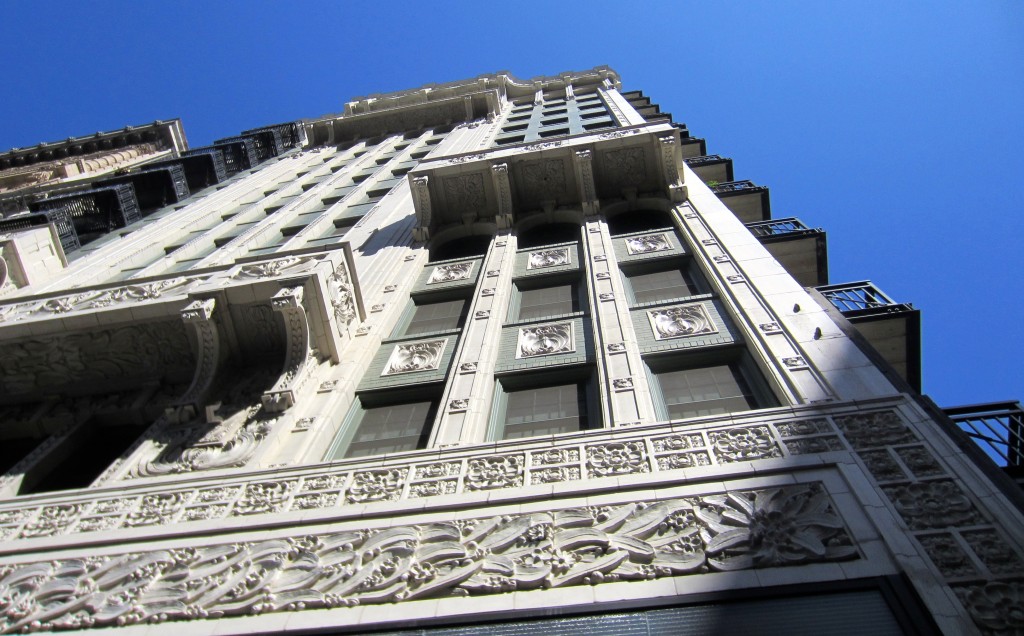 This building was built in 1913, named for the developer. The beautiful design elements on the exterior are  Art Nouveaux, a style seen more in Europe than in the US. Charlie Chaplin lived there as he was starting his career here in LA. 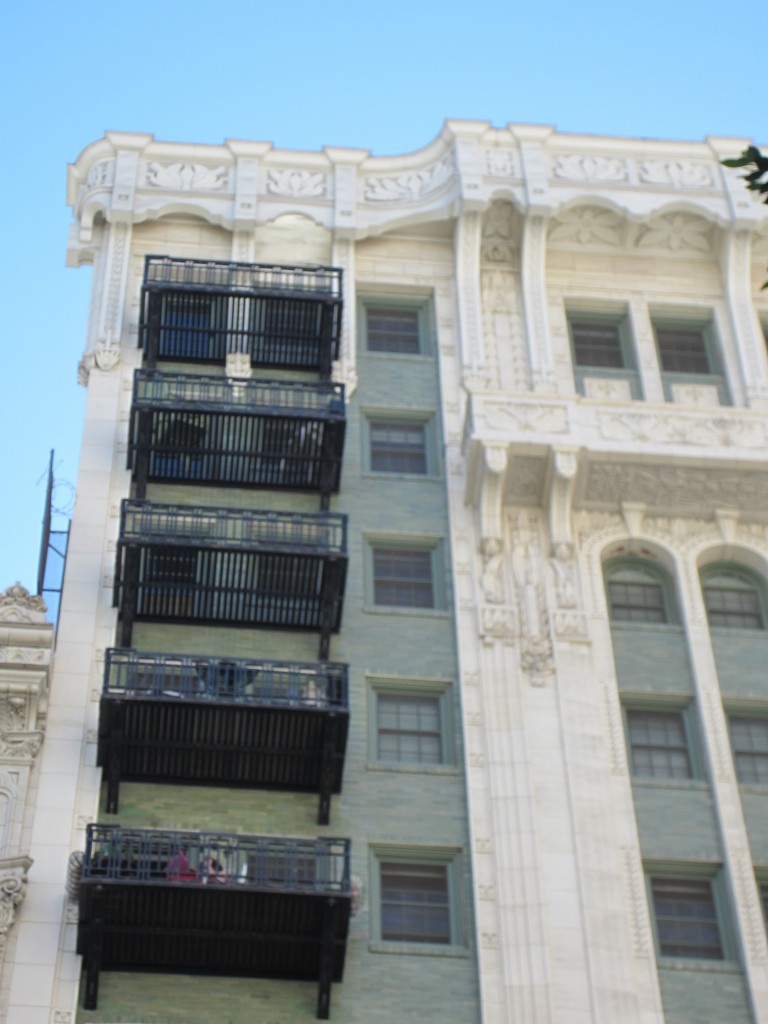 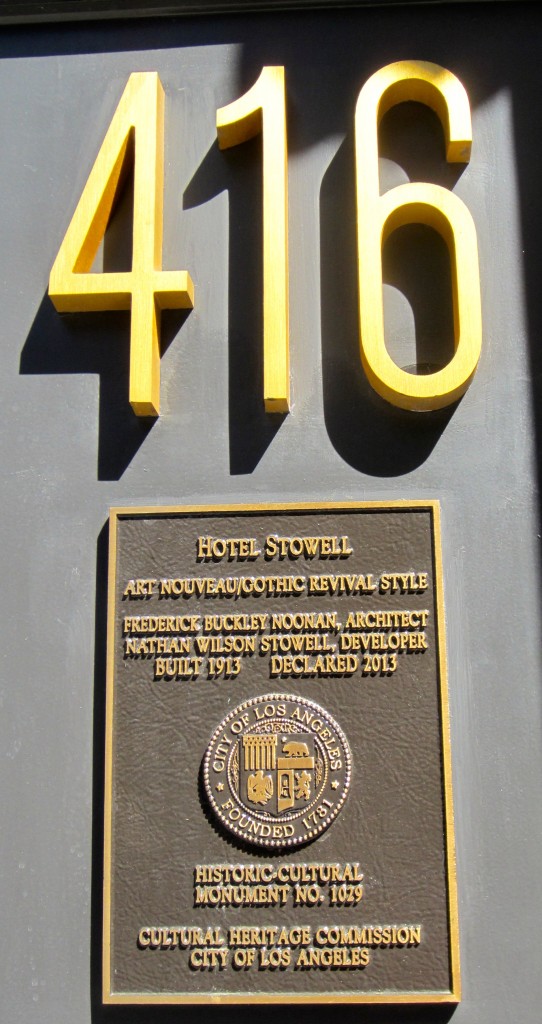 Last year, the building got this designation.

A resident found this sign and it is now in the lobby. 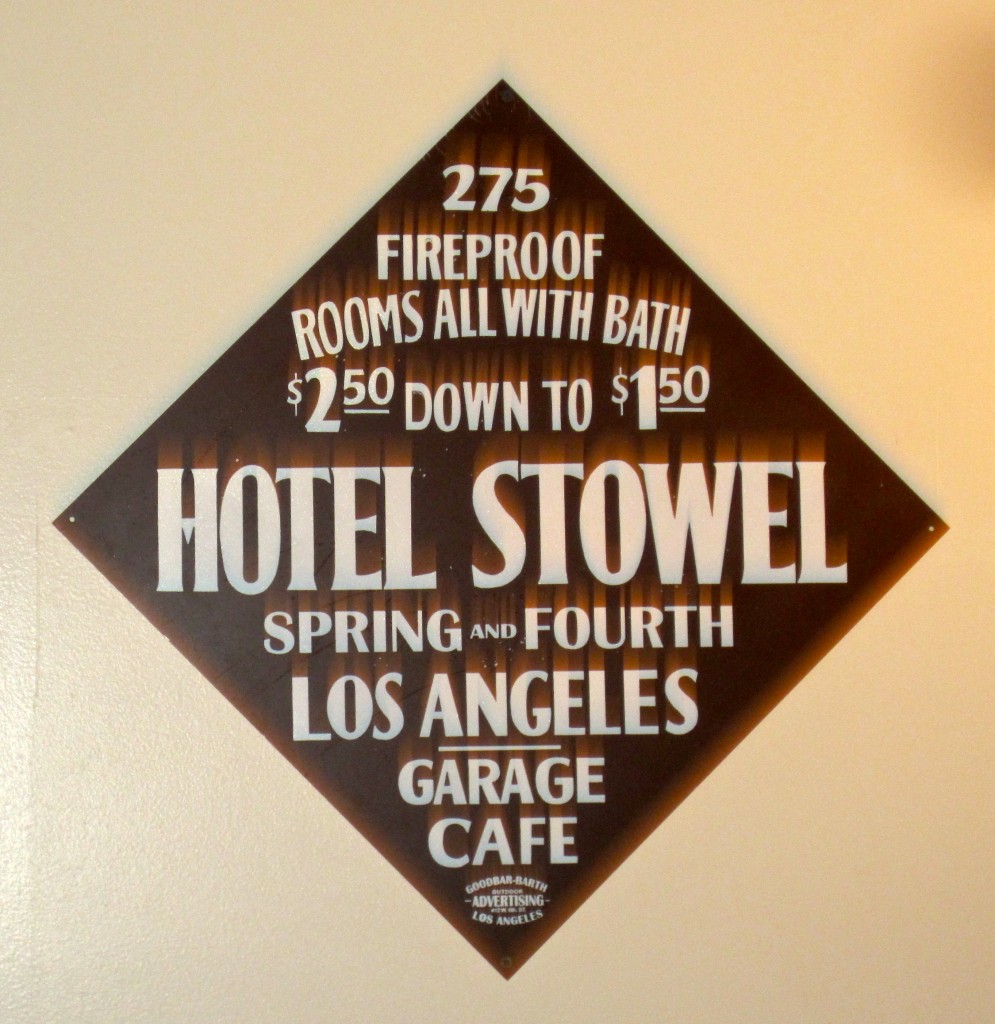 Notice the misspelling of the name, I think they ran out of room for the second L. Fireproof was a big selling point in those days, fires were the biggest hazard to buildings in the early 20th century. Those prices are what one would expect for a nice hotel in those days.

One of the things that made this hotel famous was the lobby. 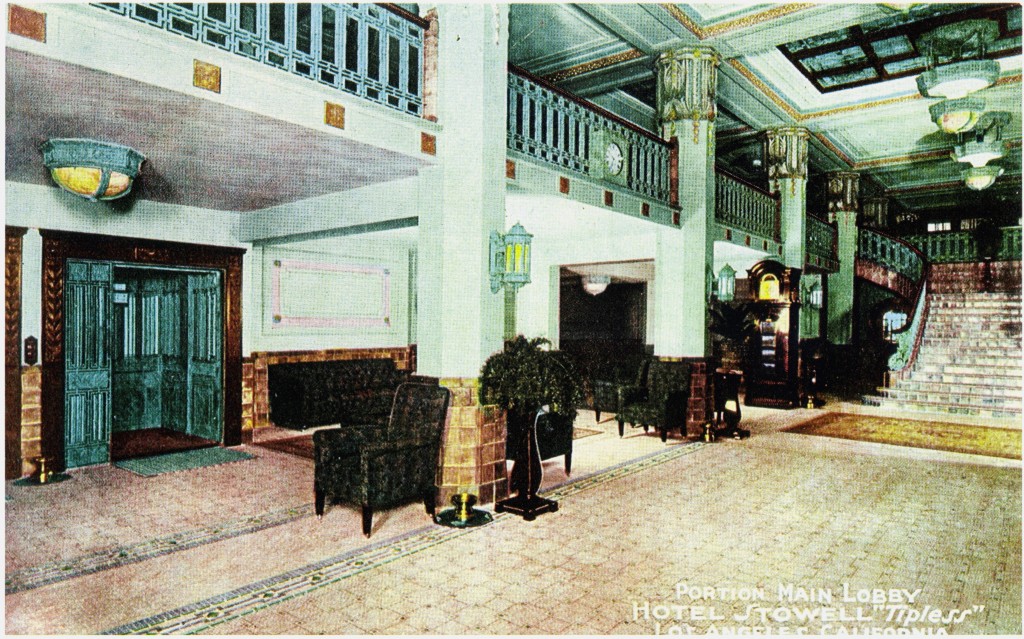 Here is an old image of the lobby. Below the lobby in the basement there was a cafe as well, a very necessary service to offer guests a place to eat. Both made extensive use of Batchelder Tiles.  To my delight and amazement, there are plans underfoot to turn this into a restaurant. We were able to go take a look. 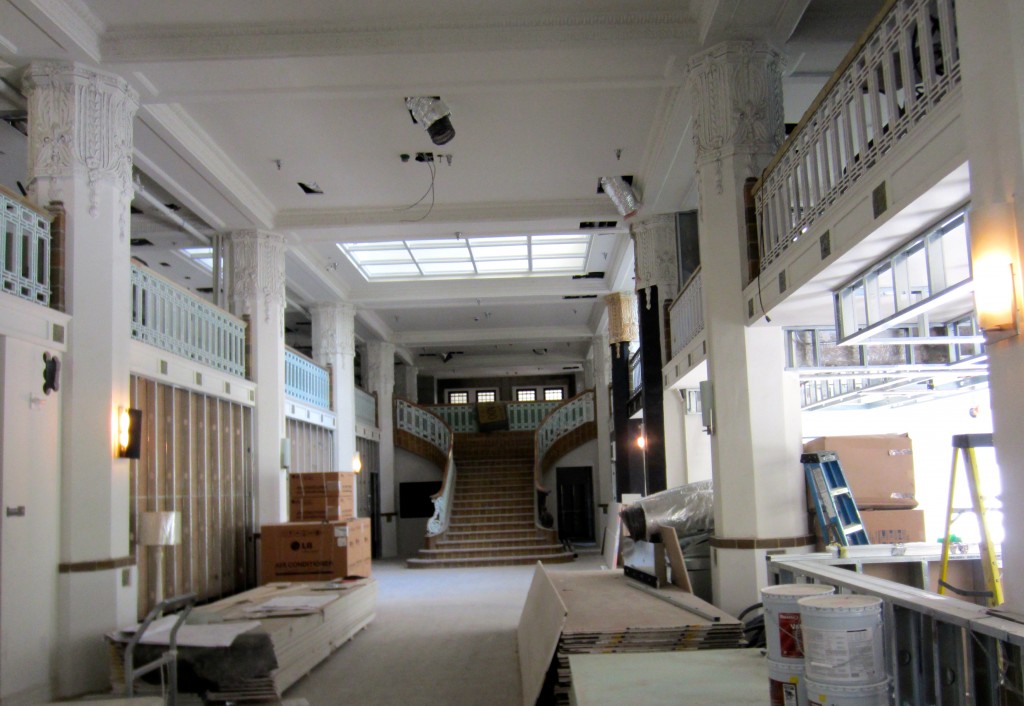 Apparently they are working in conjunction with historians to maintain the correct colors.  You can see two of the pillars are being painted black, they do have some leeway with their design choices. They are building a bar (right side of the photo) and are covering up some of the tiles. 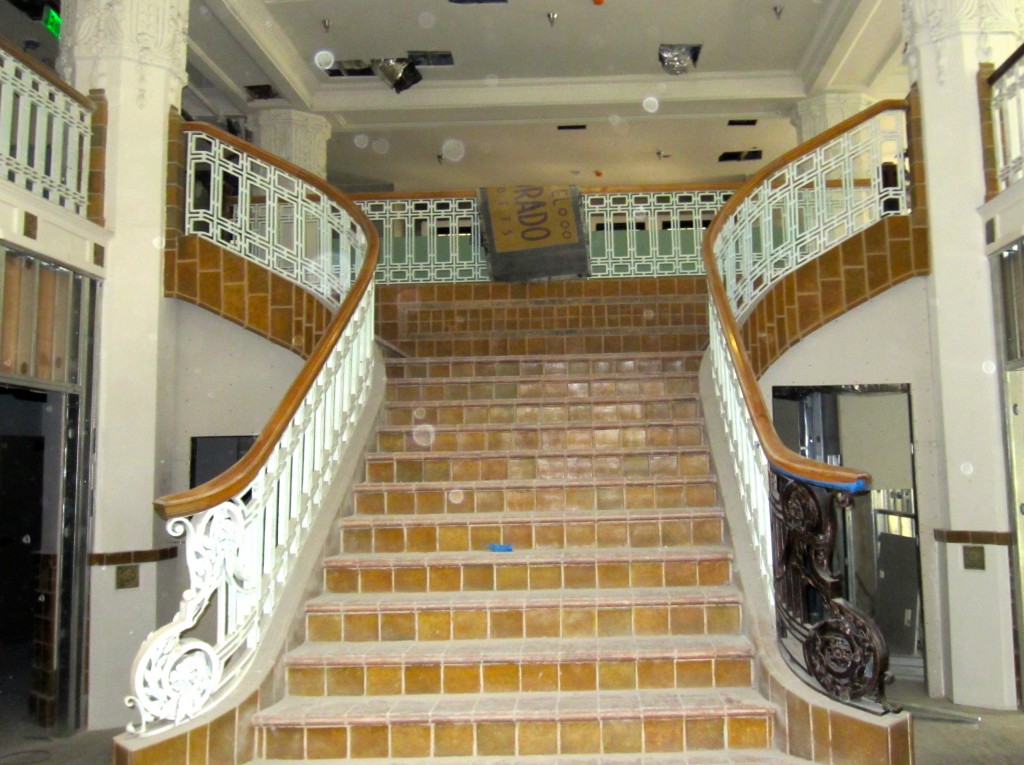 It appears that they are removing the white paint from the bannister, interesting, since in the old photo it looked white. Maybe that is why they are choosing black for the pillars, to match the dark bannisters. 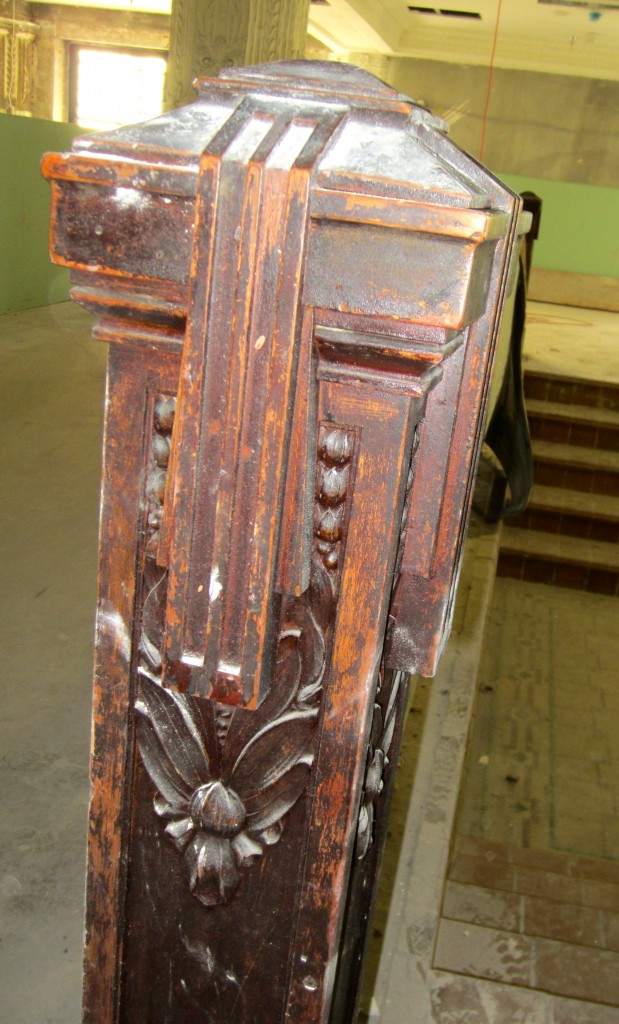 Also, cleaning up the woodwork, which I think will be a great improvement. 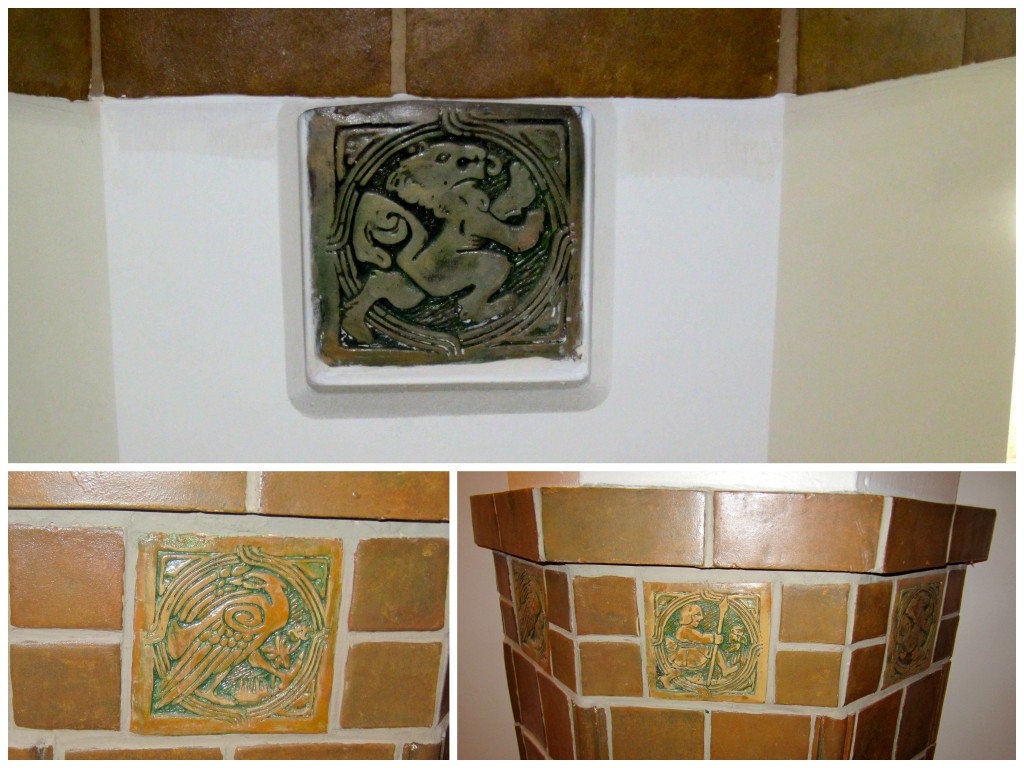 Here are examples of the tiles, both plain and decorative. Batchelder is known for unglazed tiles and often uses these wonderful animals, both real (bird) and mythical (griffin).The top image shows how they have covered all but the decorative tile. It’s covered with drywall – so no tiles are being destroyed. 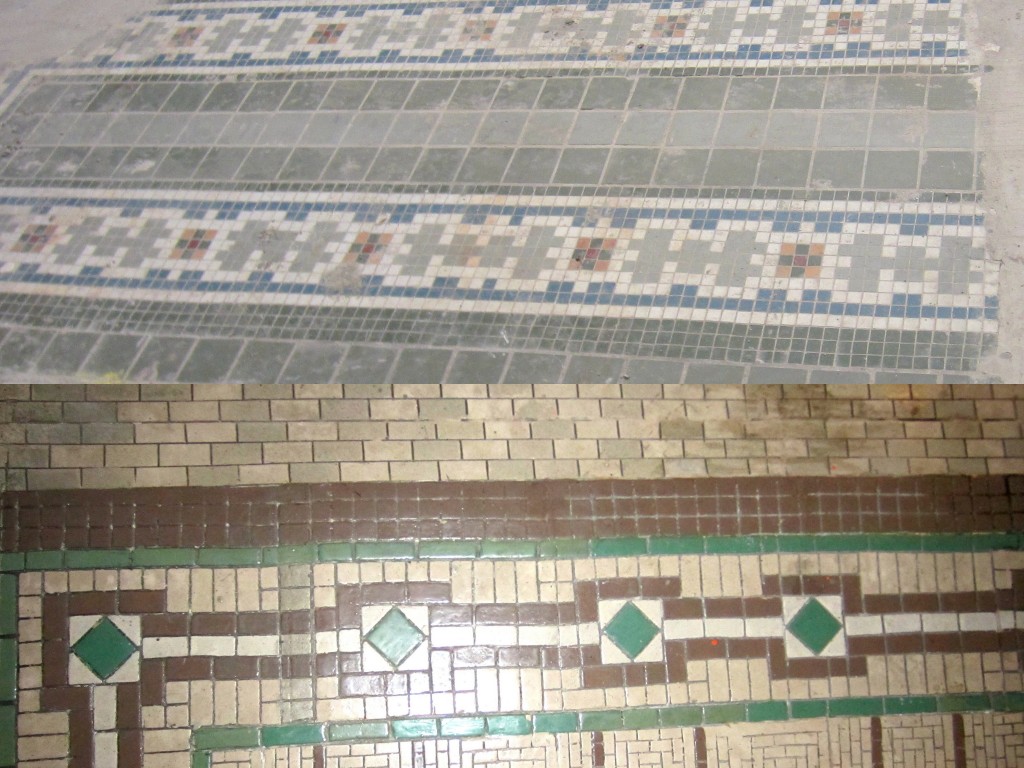 Examples of the floor.  Not all the original floor remains but what does is beautiful.

As for the apartment. It is lovely. My hosts asked it I was surprised that it doesn’t have any historical elements. Not at all. The exterior and the lobby of many buildings are beautiful and made to impress. Once you go into the office areas or hotel rooms – they are standard and pedestrian. The need to impress is only in the public areas. I can say that the apartment was light airy and had storage!  The modern developer did a great job but to be fair, had nothing historic to work with.

Yesterday I was downtown with a friend. We weren’t in my regular stomping grounds, but I knew of a gem of a building that is a must see.

I forgot my good camera so my pictures are from my phone.

One thing I always tell people, when walking on the street, look up! Most of us don’t do that, so when coming across this building, most people don’t notice much.

Look up at the ceiling, also amazing.

For more information about this gorgeous building.

All the tiles in this building were made by:

I am falling in love with California tiles. It makes perfect sense that in a city where homes were built from clay (adobe) there will be a wonderful ceramic tradition, and there is.  Ernest Batchelder has his own unique style, namely – he didn’t glaze his tiles, they don’t shine, he would paint many of them, and seal them.  Notice the ones on the floor by the elevator, color, but no shine.

Many private craftsmen homes have fireplace surrounds with his tiles, in downtown LA, we have amazing examples of his work. This building is one of his largest commercial installations. Unfortunately you can’t go up to the mezzanine level to look down, it is a fully functioning office building these days and yes, the tenants are paying for privacy.