I made reservations in Quebec, was very pleased with the Hotel Champlain, right in the walls of the old city, with parking!!! We only took the car out once, but it was nice having a place to park the car while we hopped on buses and boats to get around. 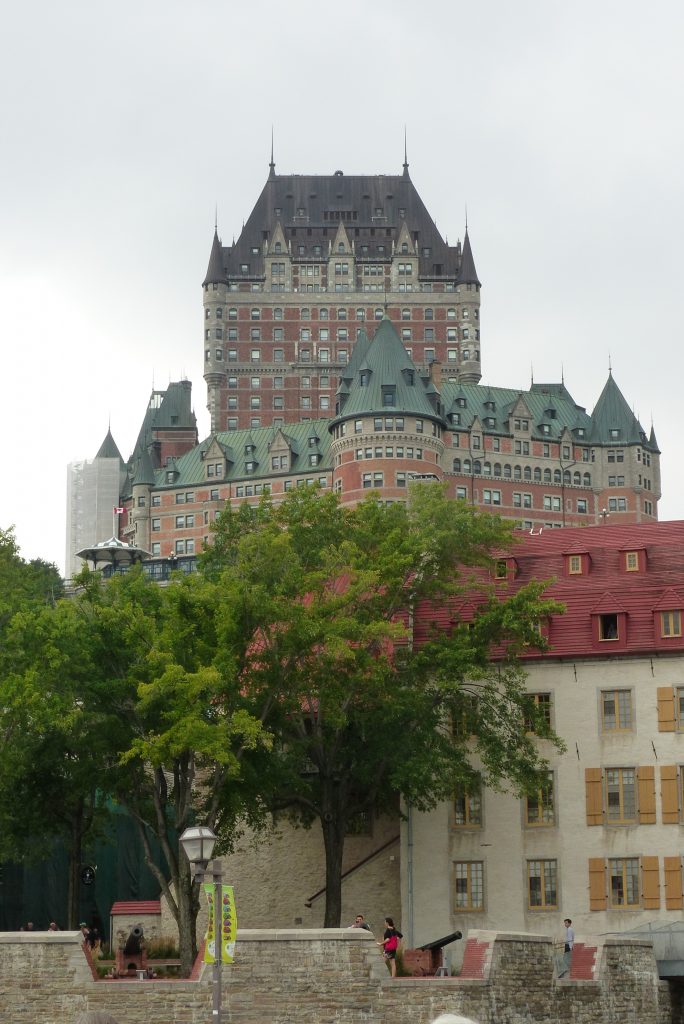 I guess I should start with the most photographed hotel in the world. The Hotel Frontenac. When the city was created, they chose to build the city up on a hill, so that they’d need less walls. The city is 400 years old, ancient for North America. It is where the St. Lawrence River narrows, so it’s a great place for a port. At the time, the fur trade was all the rage. Very very hardy adventurous Frenchmen went into the backcountry and came back with furs, which were shipped from Quebec to Europe. Someone needed to build a port and a town for that to happen. 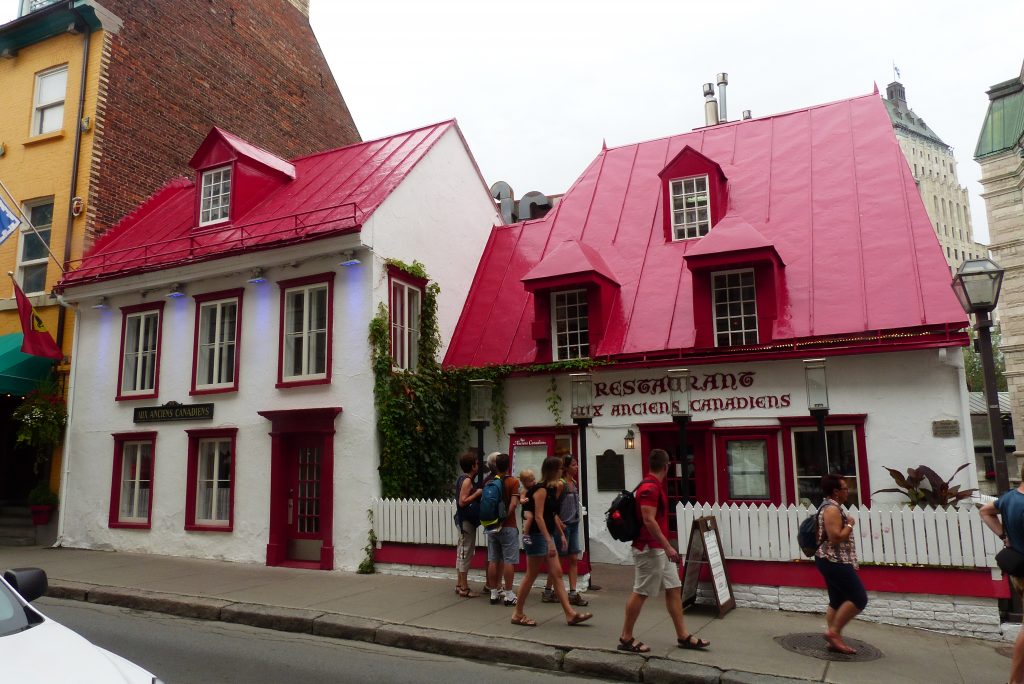 On all the tours we took one word was repeated over and over again – fire. Fire has always been the biggest enemy in any city and for years people have tried to figure out how to safeguard buildings. Today a restaurant is in this building, the oldest surviving building in the city. In Quebec’s case, war and bombardment destroyed many of the old buildings. This is a typical house, built of local limestone, it would be limed, with white lime to make the stone less porous. The roof would be slanted, they get up an average of 10 ft. of snow in the winter, flat roofs will collapse. There is a railing along the roof line to prevent big chunks of ice falling, but then you do have to worry about icicles. The roofs were made of tin from barrels, recut into tiles. The red color came from mixing cow blood into the resin. Nothing was wasted. 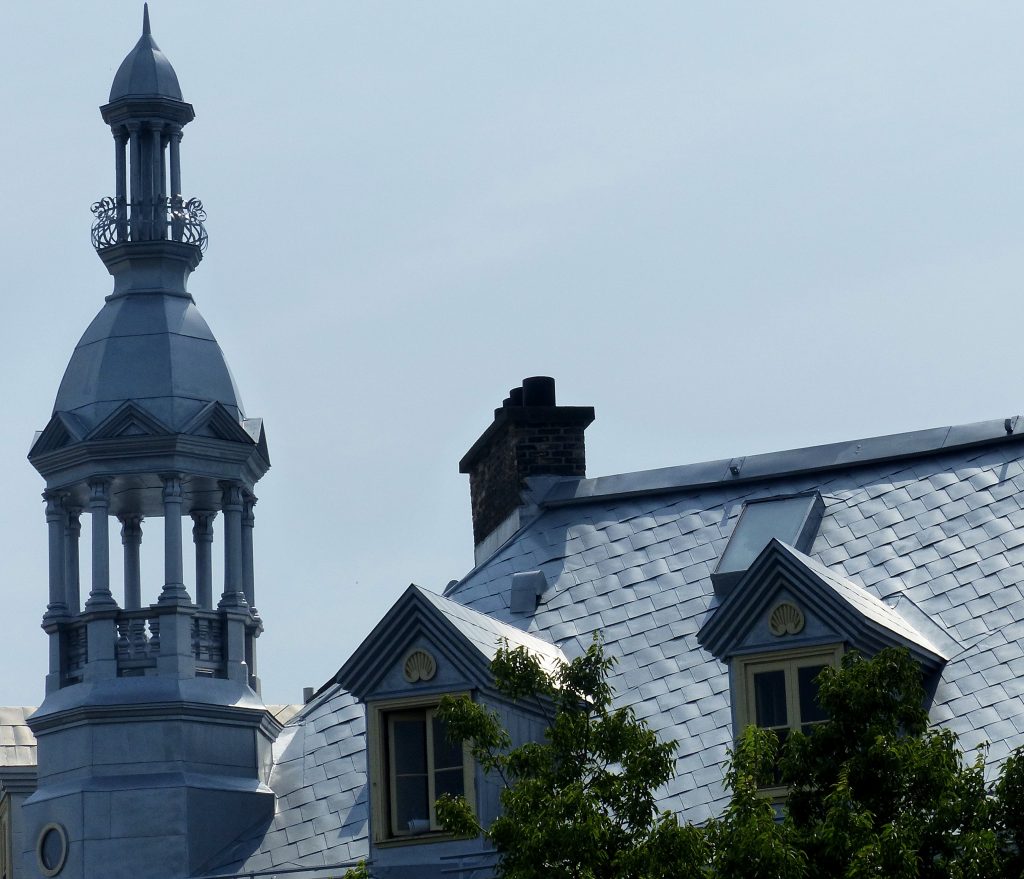 Here is an example of the tin being cut into tiles for the roof.

Speaking of rooftops, here are a few more amazing ones. 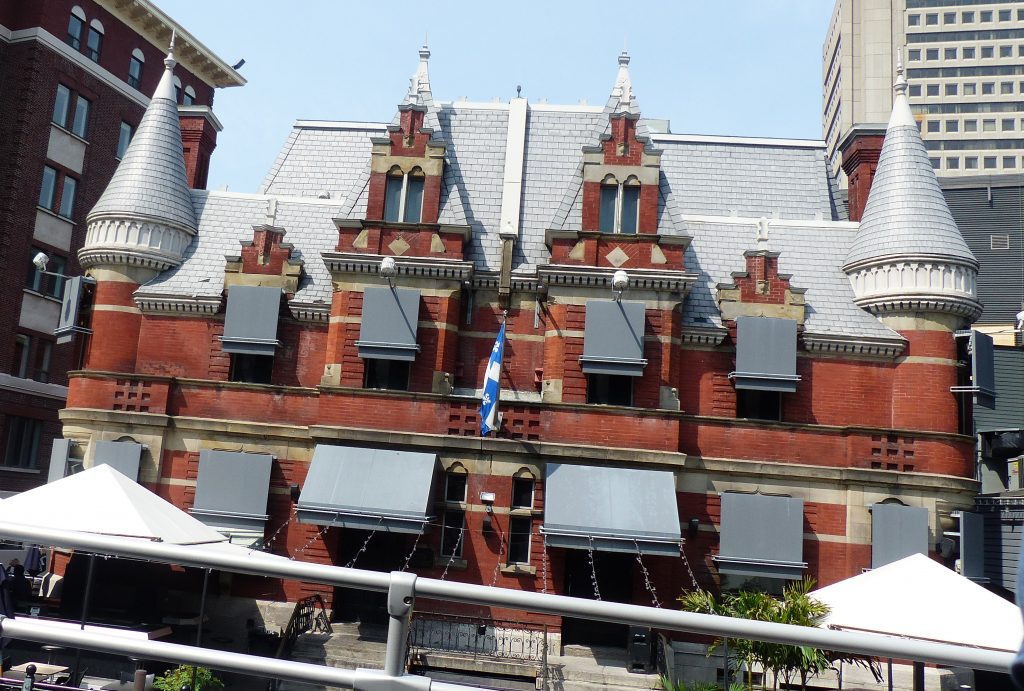 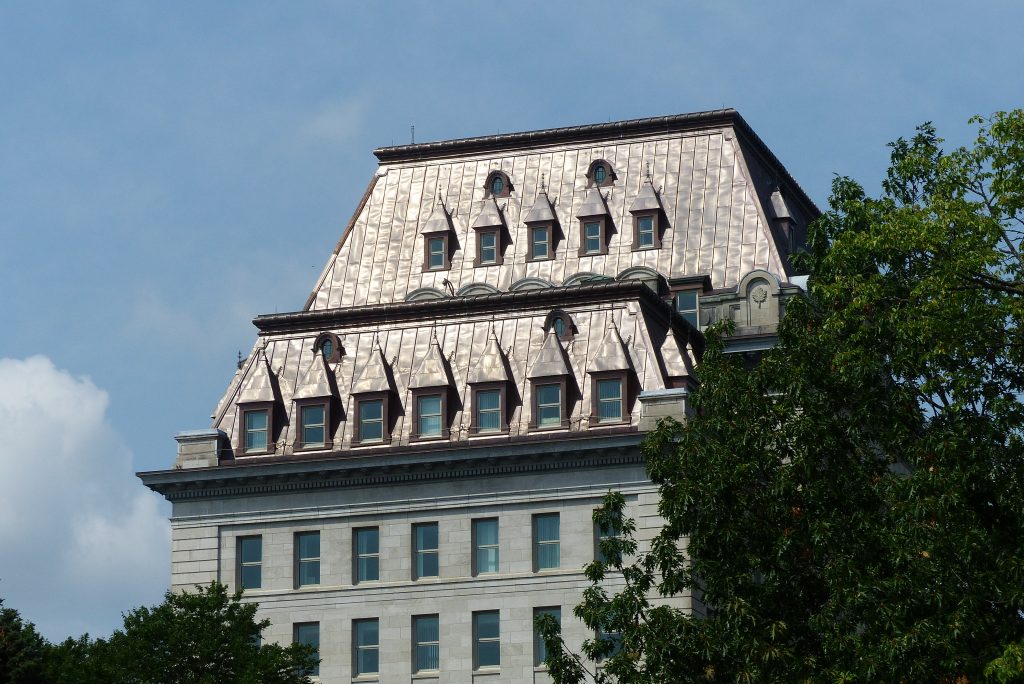 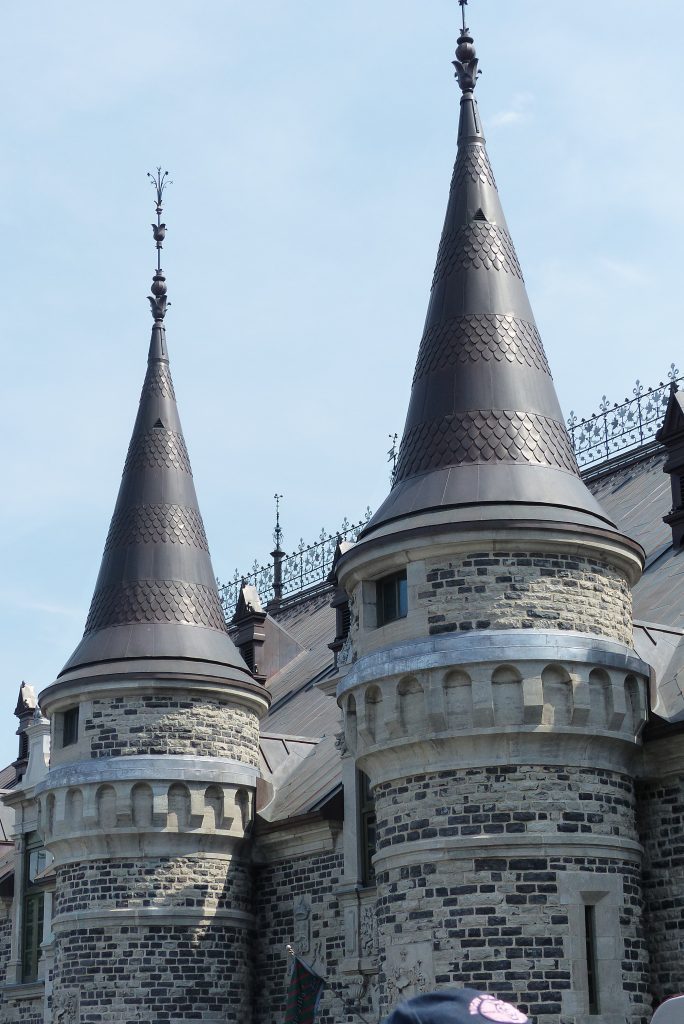 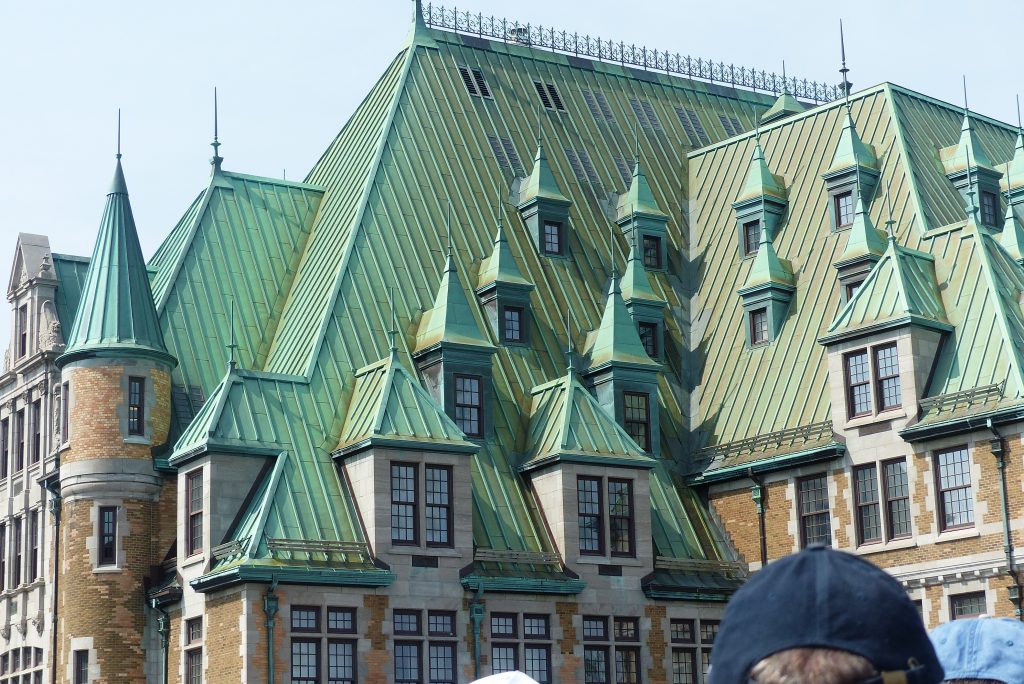 The advantage of taking the double-decker bus, I get a better view of the rooftops. This and many others are copper that has gotten this green patina over time. The combination, of green, red, tin and other shades of brown, really makes the skyline very interesting.

The French got here in 1534 and ruled for over 200 years. Those early years were just fur trappers, traders, and the Catholic Church. The British had communities in Newfoundland and Nova Scotia, although those were basically under French rule. At some point immigrants stopped coming from France but still came from the British Isles. That was probably balanced out by the high French Birthrate. In 1759 a battle was fought in what is today, The Plains of Abraham. Both the English and French Generals died there. Years later an Obelisk was erected, honoring both generals. Sorry, I didn’t take a picture. My comment is: Canadian Nice! No where else in the world would someone honor both the victor (English) and the defeated (French) in the same monument. 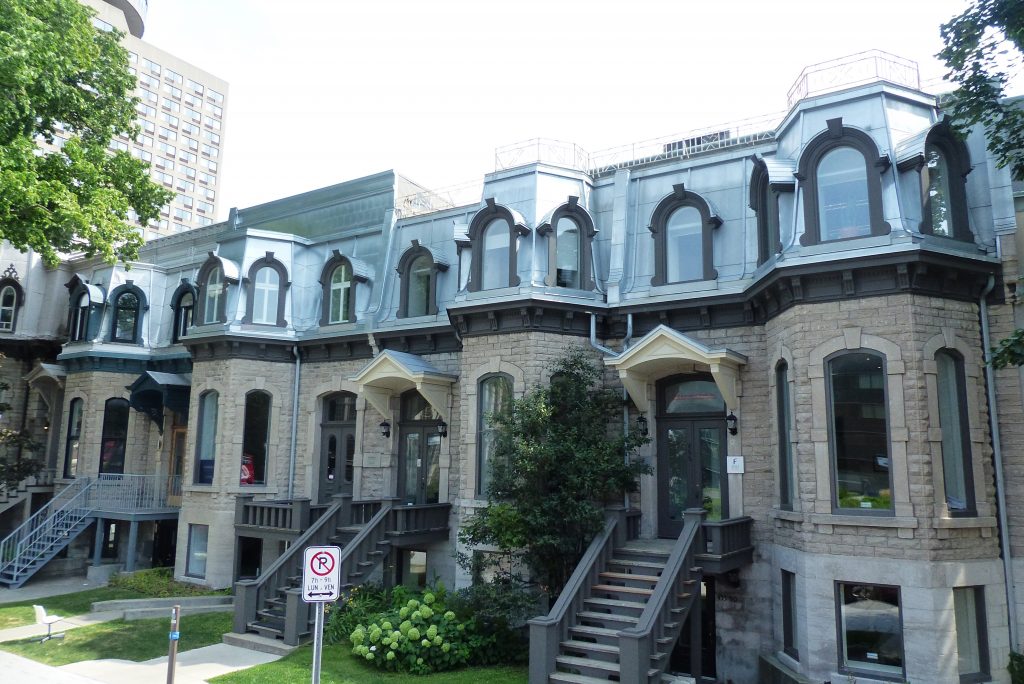 English Victorian homes, this is the first time the houses are set back a ways from the street. 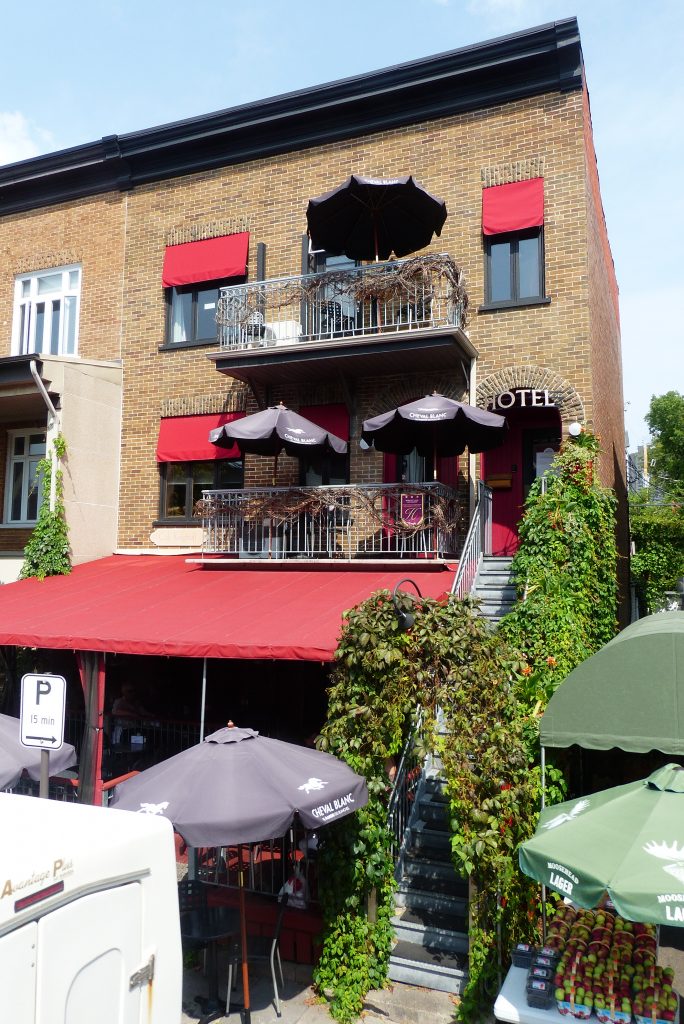 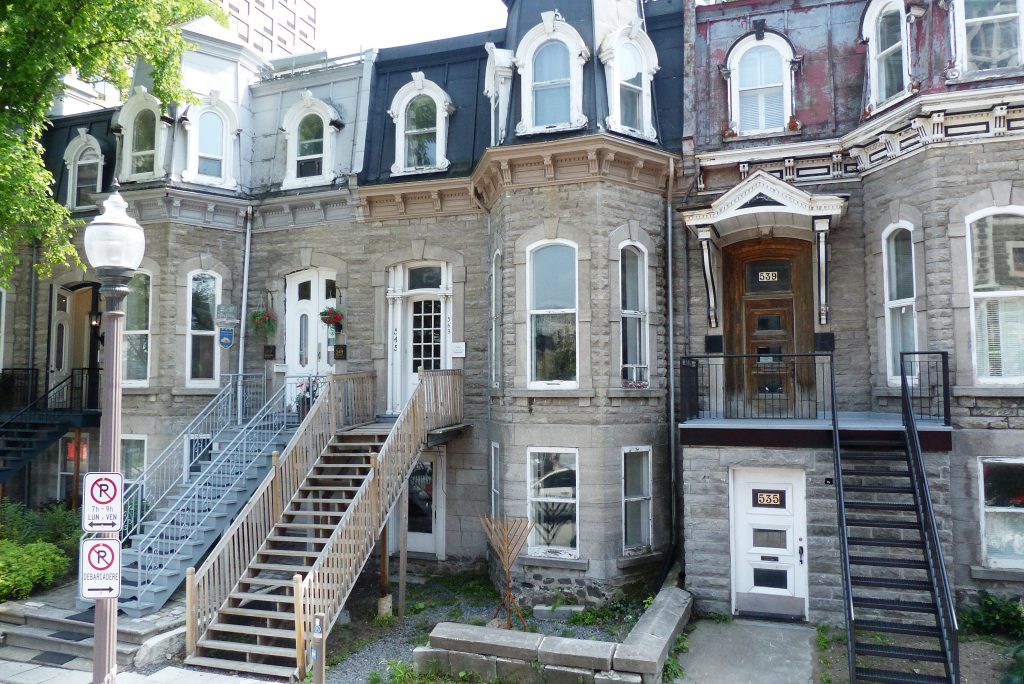 Some more of those outdoor metal or wooden staircases, even the British Victorians adopted them. 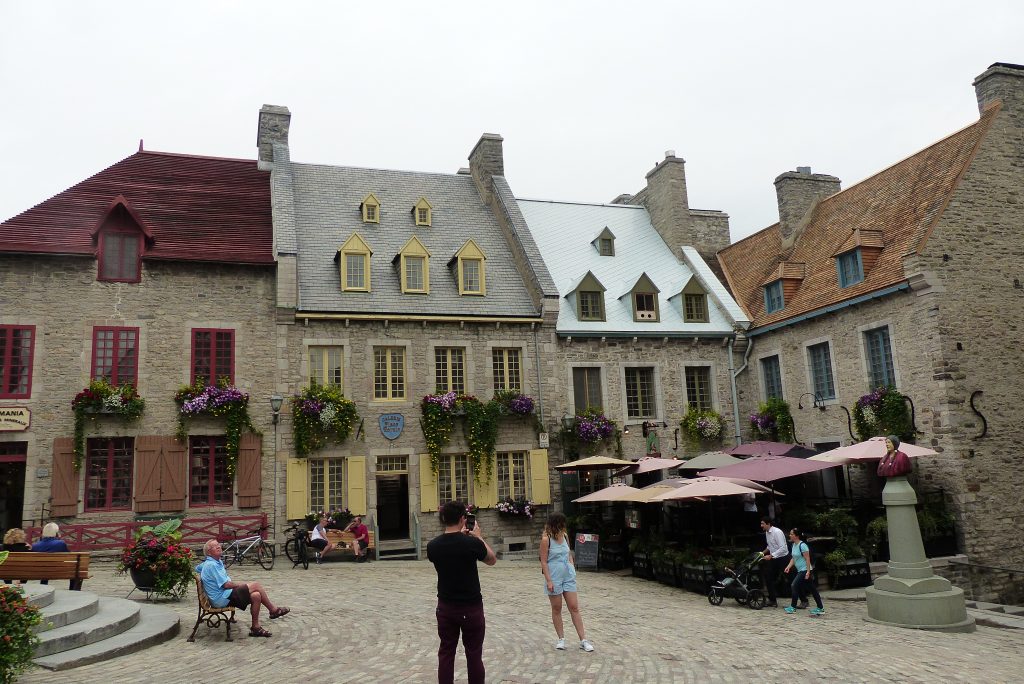 Down in the lower city, are four houses that were renovated with four different types of roofs from Quebec’s history. On the left, the red roof as it probably would have looked originally, it would have been made of wood – fire hazard. Then a slate roof, but that was very expensive, the cut tin roof and the British tile roof. 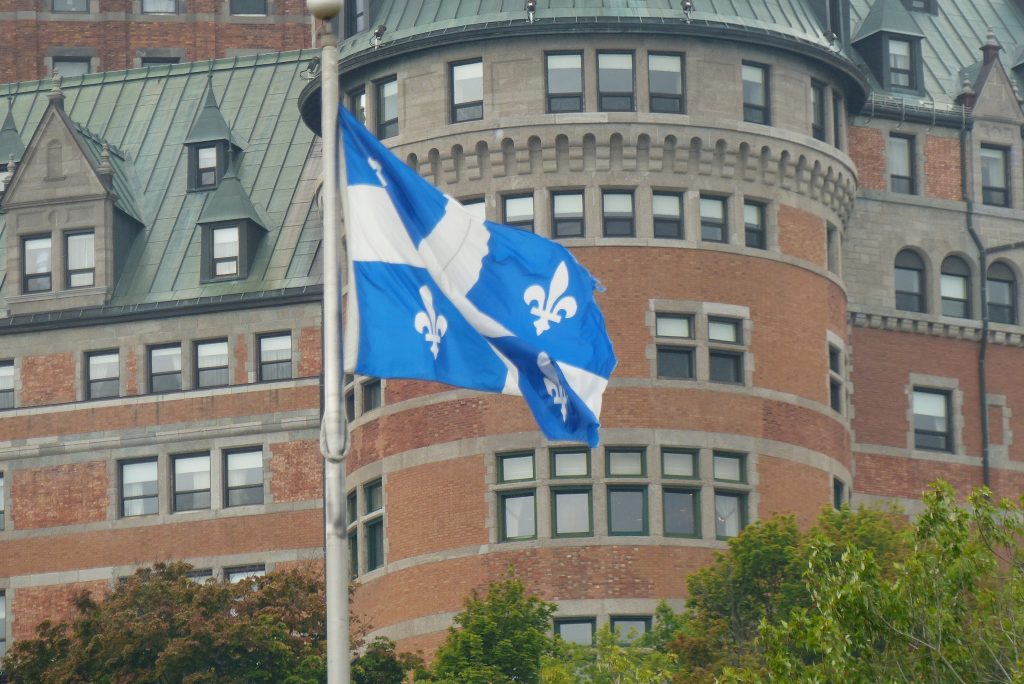 Flag of the province.