Since I live in an arid climate, visiting places with a lot of natural running water in a thrill. 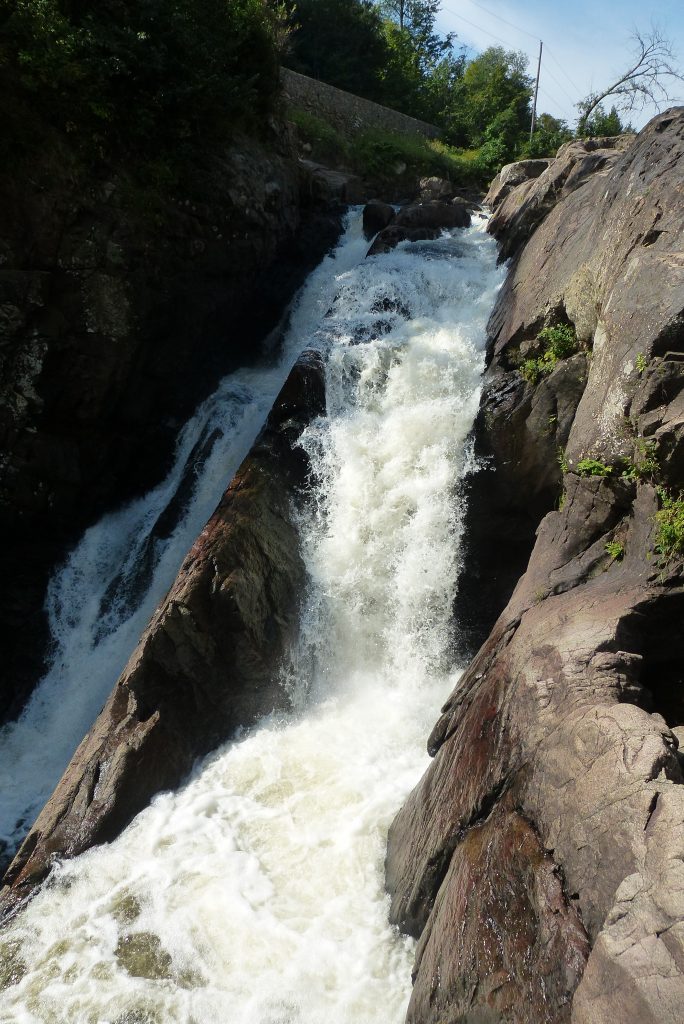 Here I am at High Falls gorge, look at the power of the water. 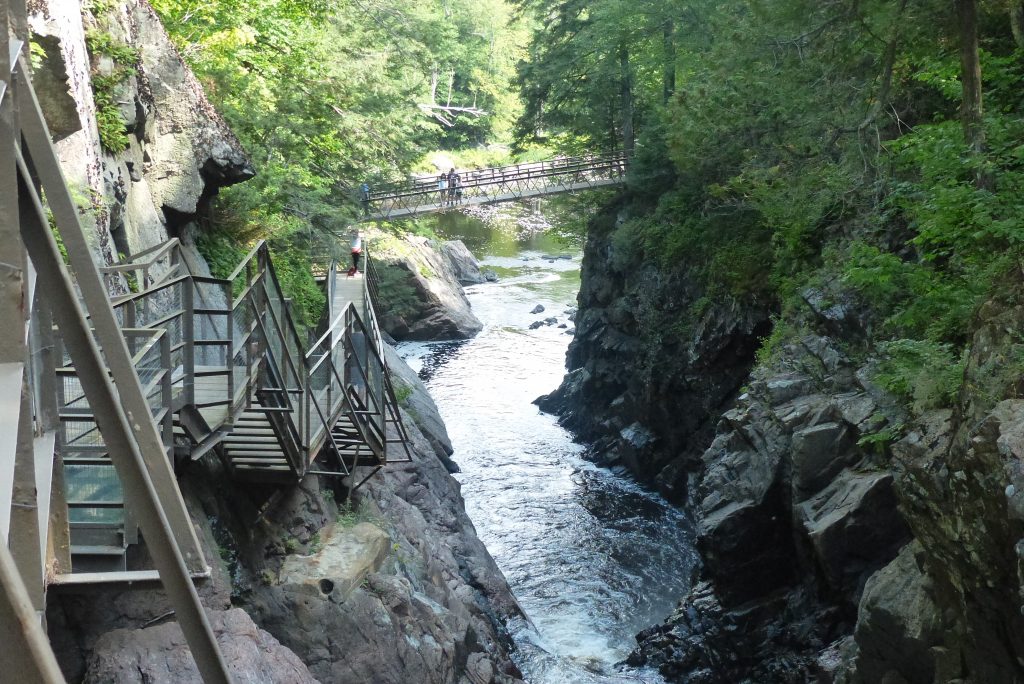 They call this part of the Grand Canyon of the Adirondacks. When the highest mountains are just over 4000 feet this makes sense. Out in the west those are hills, not mountains. Our local Lake Arrowhead is at about 5000 feet, and that’s not high at all. But I always say, celebrate what you have. The Adirondacks have a lot of running water and that is worth celebrating. 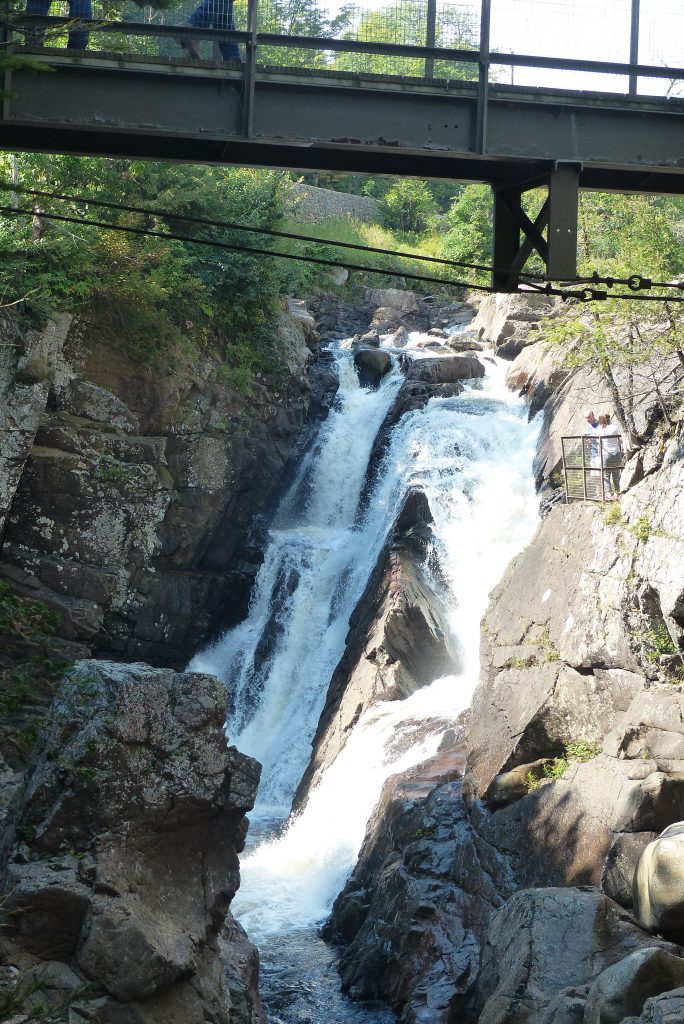 This little park is privately owned and very well maintained, good paths, bridges and explanations about the geology, fauna and flora. 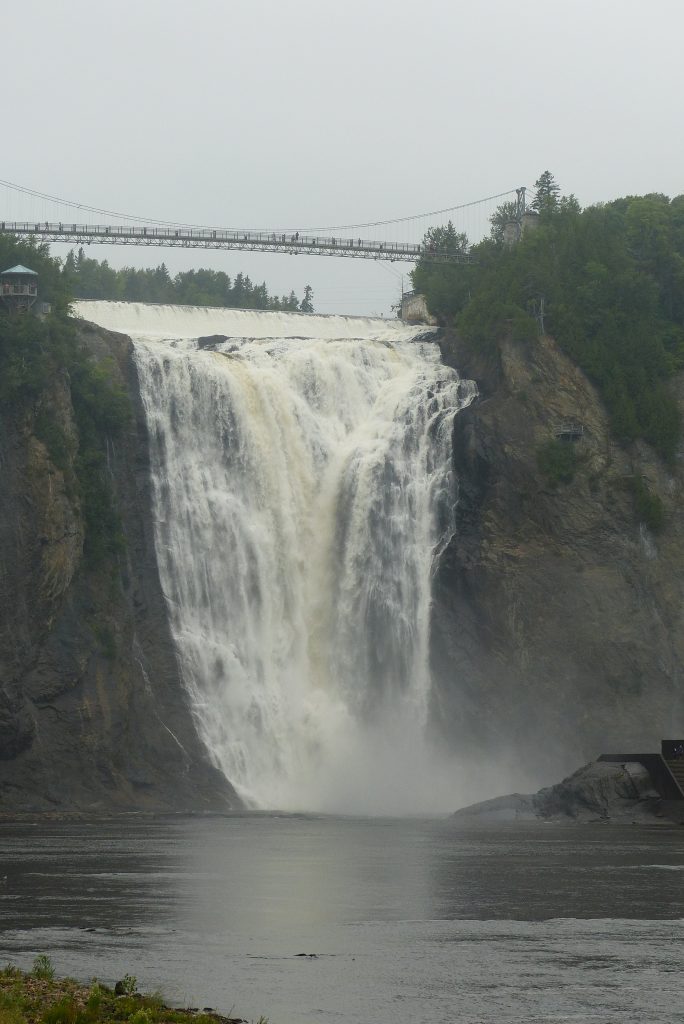 Now this is a real waterfall. Outside Quebec, the Montmorency falls. Large, powerful and very impressive. They used to have a hydroelectric plant here, but they built bigger and more powerful ones and returned this to its natural state. Maine gets a lot of it’s power from Quebec. 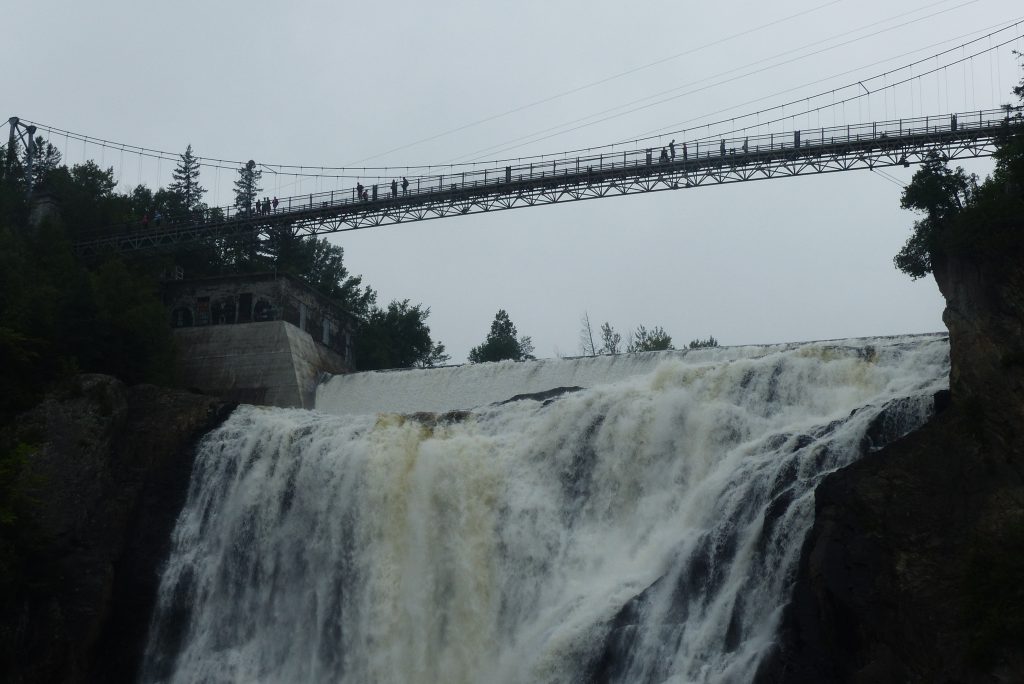 No hiking up 480 stairs, just the first 40. No taking the Via Ferrata trail, we went up in the cable car. 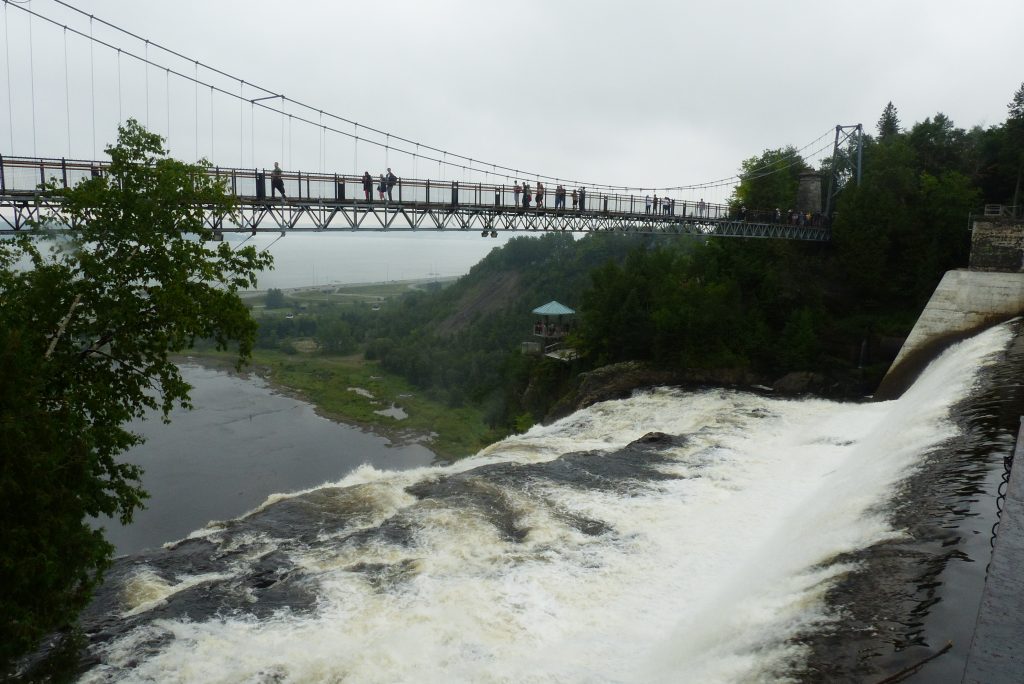 With my fear of heights I was able to cross this bridge twice. First of all, it’s stable, it doesn’t sway, it is very large. I looked straight ahead, never down. I took this picture after crossing the bridge, looking back at where I came from. Later, we’d go to that little gazebo for another look at the power of water. 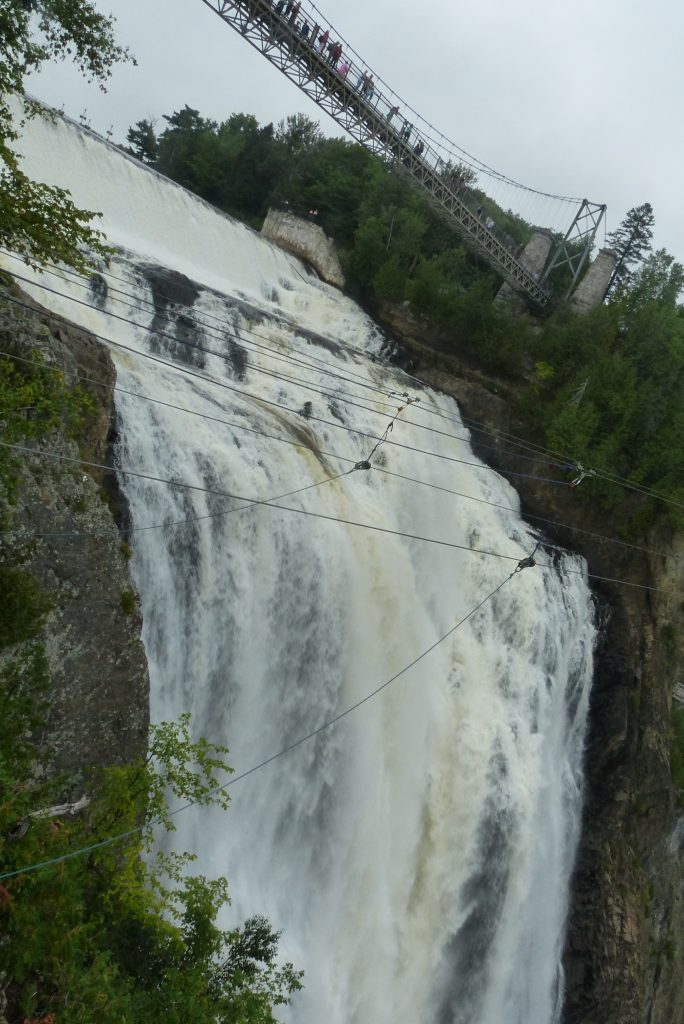 View from the gazebo, my camera died just has two people zipped by on these zip lines.  All I managed to capture is their safety lines. 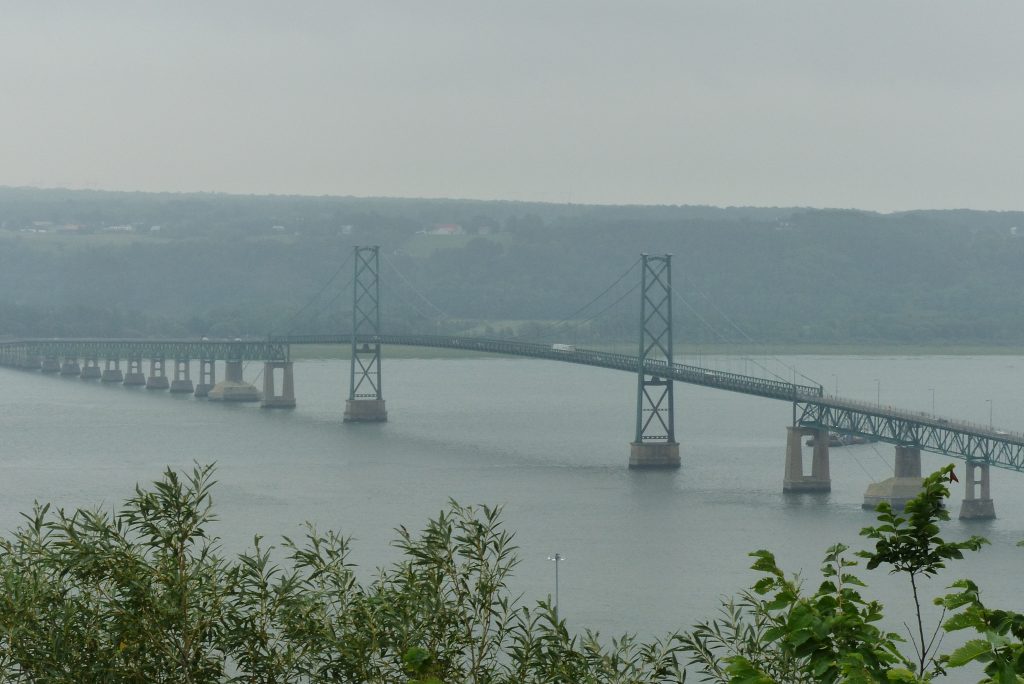 Looking at the St. Lawrence River and the bridge that connects Ile De Orleans to the mainland. Good thing we had a car and could drive there. This is one of the places the gal back in the Chocolate Shop told us to go to. It was so worth the trip. All farmlands, and people selling their produce. 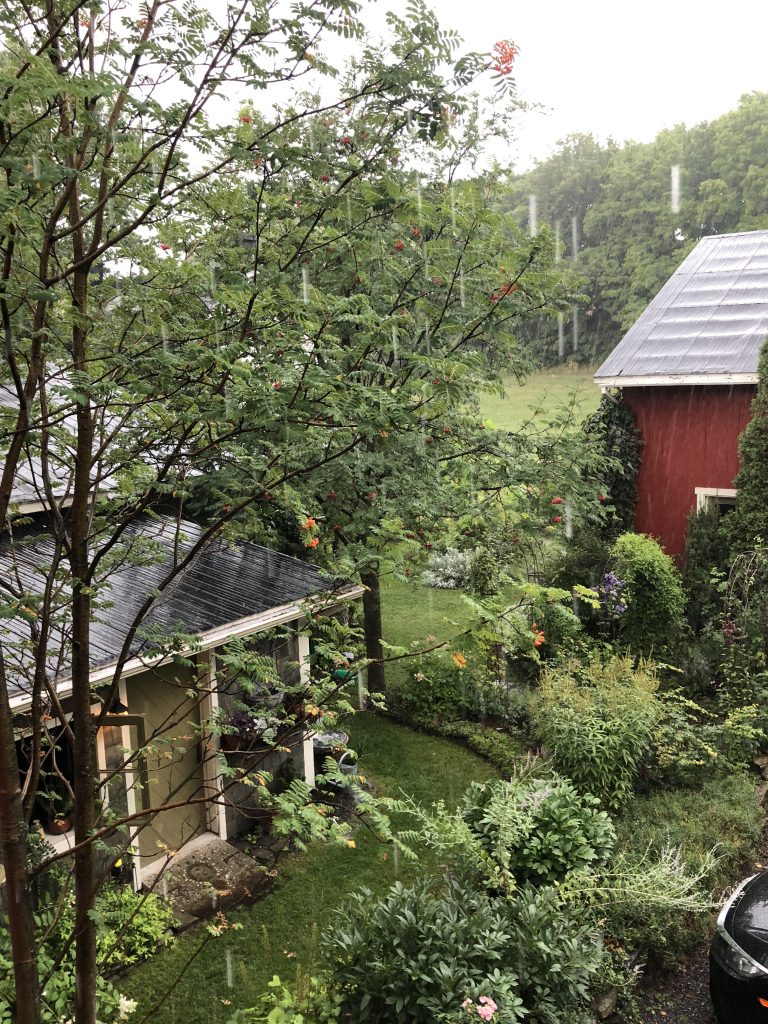 We had lunch at a local restaurant that produces black currents, everything had that in it, it was wonderful. A few miles later, we are visiting an art gallery, and the rain started pounding. It is rare to capture raindrops, and yet here I did, the rain was that strong.

Later we stopped at a cheese shop and indulged. All in all, if you get to Quebec, go to Ile de Orleans. I had thought that the Chemin Du Roy would be like this, it wasn’t, so this was a real treat. 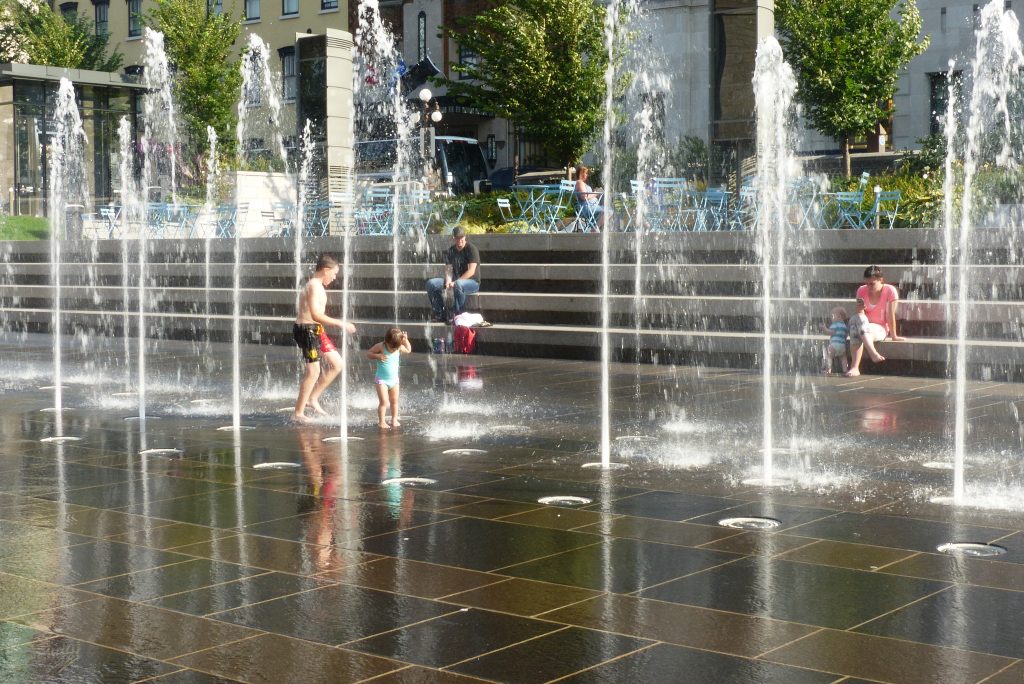 We had some very hot days in Quebec, local children enjoying the fountains.