The Valley is huge, it has more residents than the state of Wyoming and covers  260 square miles.  It has the reputation of being a suburban wasteland – mostly by people who never set foot here.  Of course like any place else, it has many interesting historical sites. 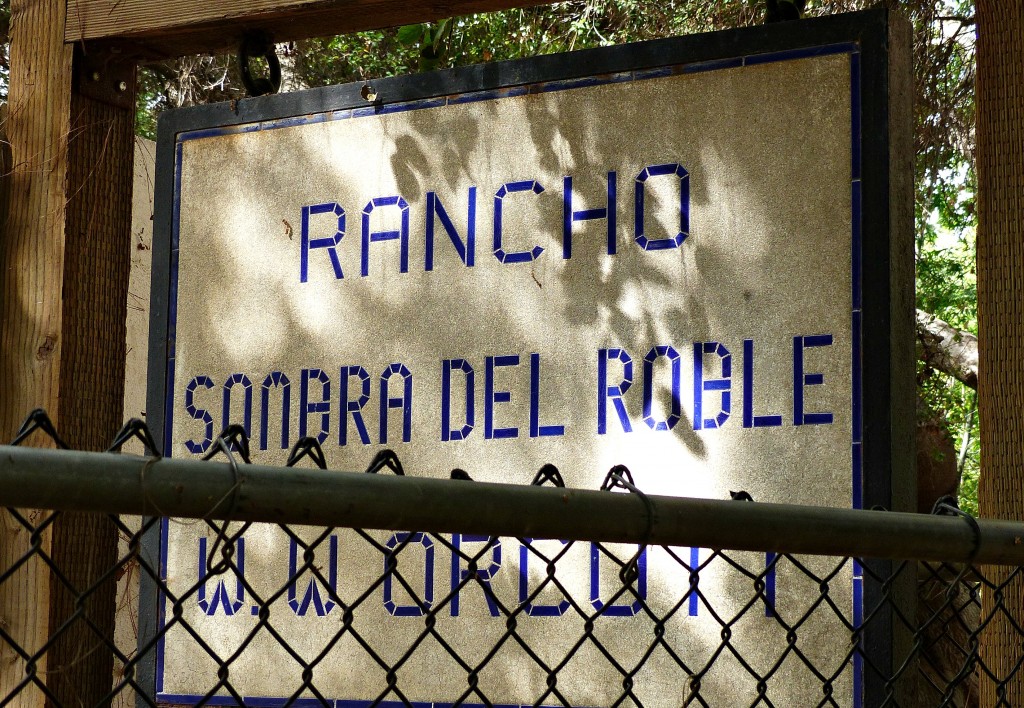 Rancho Sonbra Del Roble or the W.W. Orcutt ranch is such a place. It is on the very far western reaches of the valley. Not an area I frequent but I’ve driven by enough times that I figured it deserved a visit. 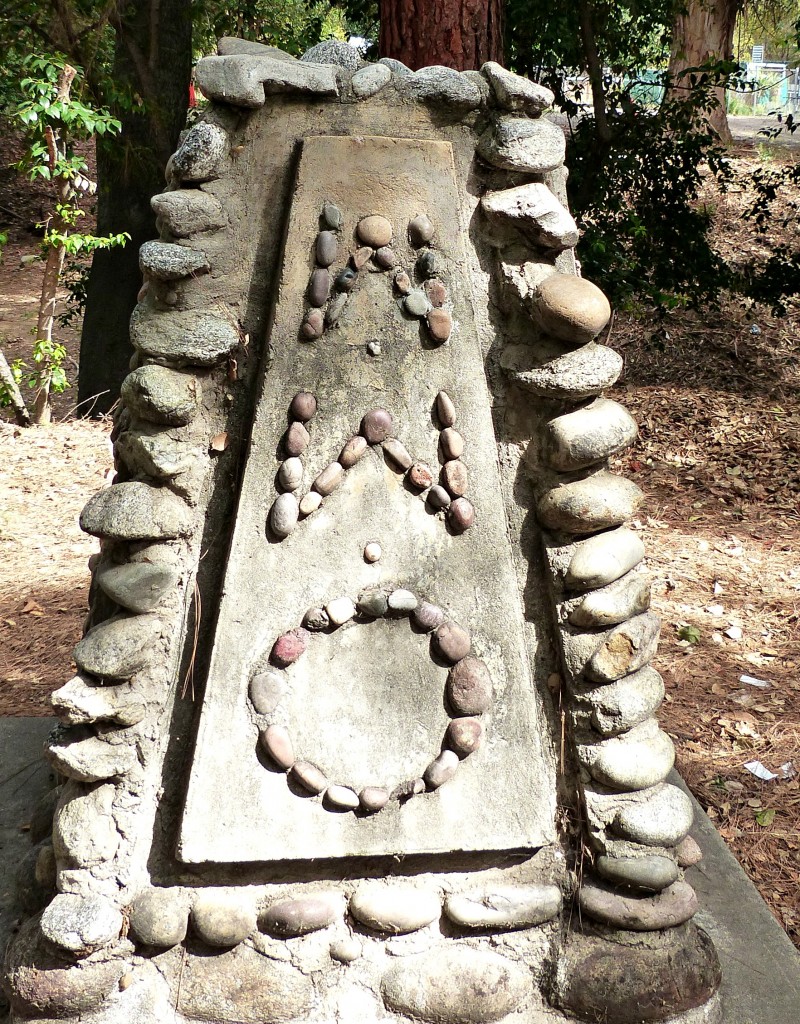 Built in 1926 as a working ranch and vacation home for the oilman W.W. Orcutt.  One of the things I enjoy about my explorations of local areas is learning about important people who contributed to the LA basin.  Orcutt is responsible for using geology in oil exploration as well as discovering the fossilized remains at the La Brea Tar pits. 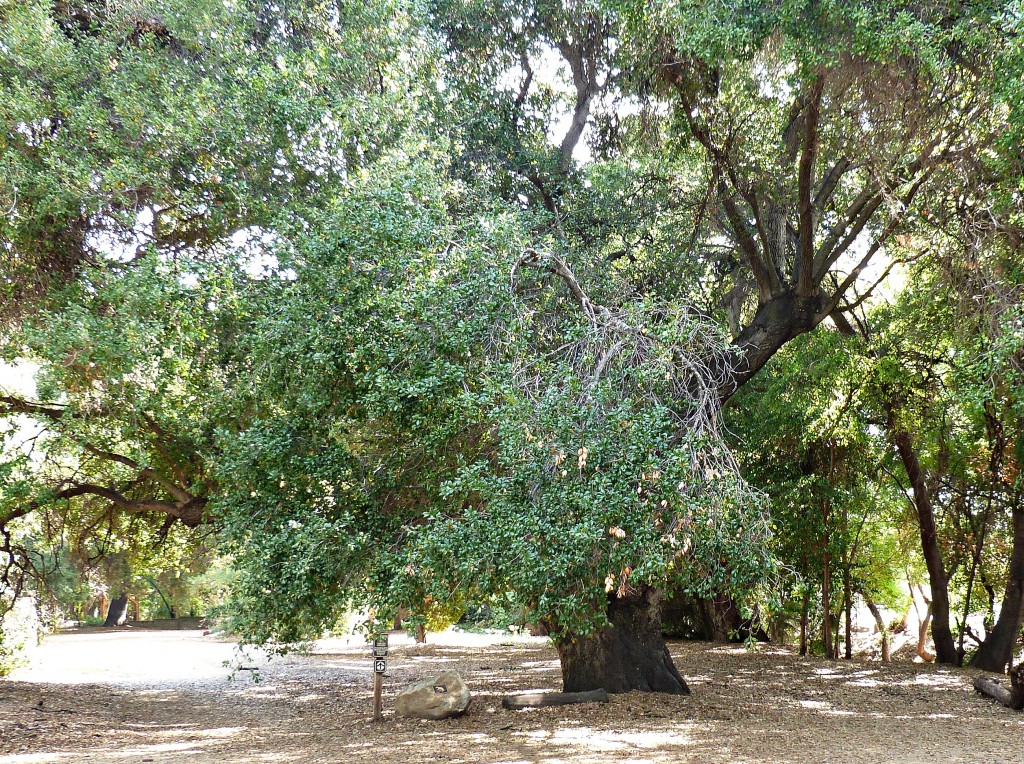 Sonbra del Roble means under the Oak tree and this ranch has some beautiful old California Live Oaks. 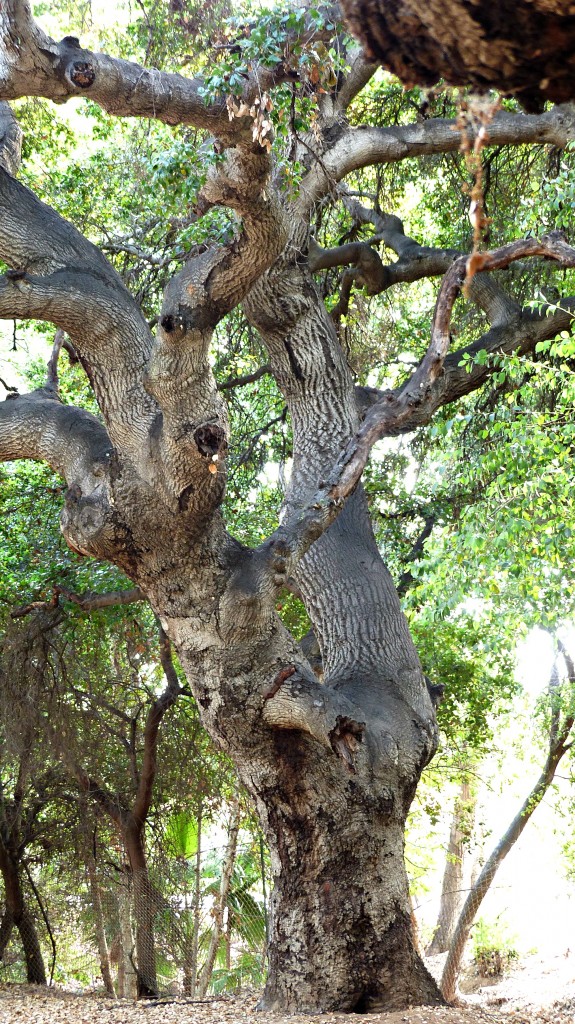 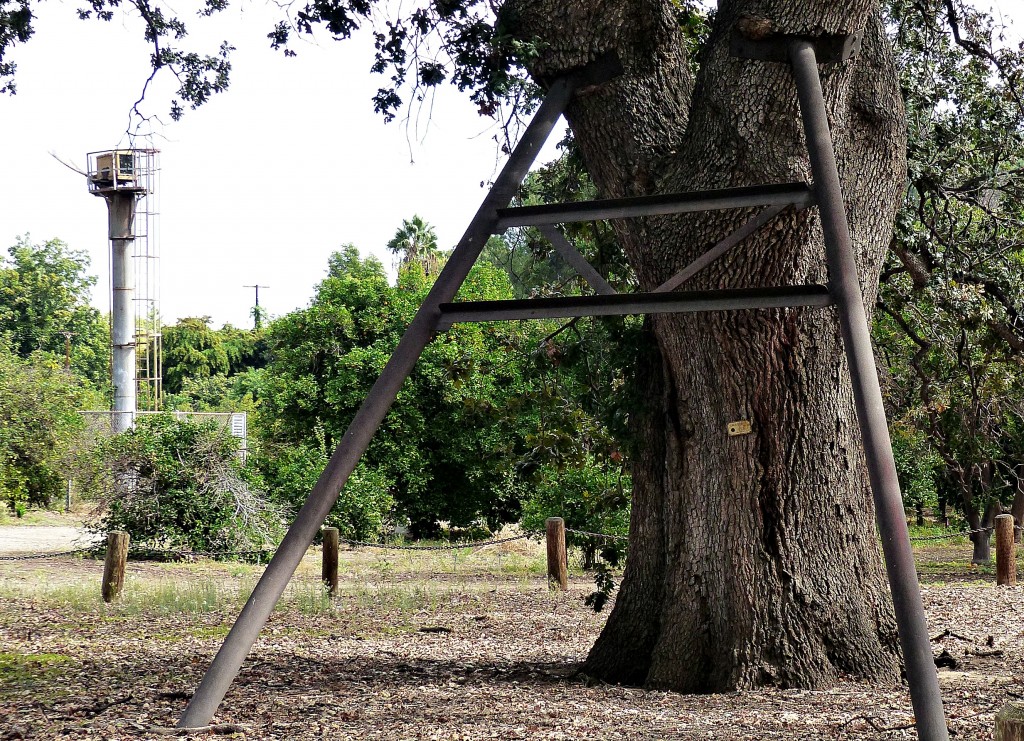 This old tree looks like it has needed the propping up for a while. Unfortunately I’m sure these trees are being affected by that nasty foreign beetle that came in with the shipping containers. 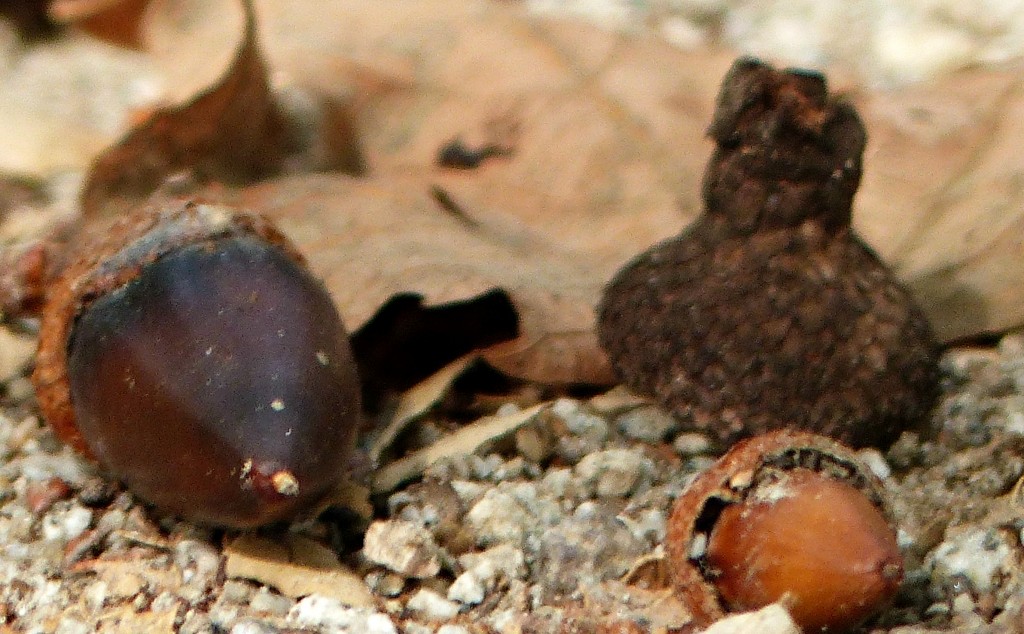 These mighty oaks do come from little acorns.

The ranch used to have cattle and citrus. Today the cattle are long gone but some of the citrus sill remains. In 1965 24 acres became a public park, as it is today. 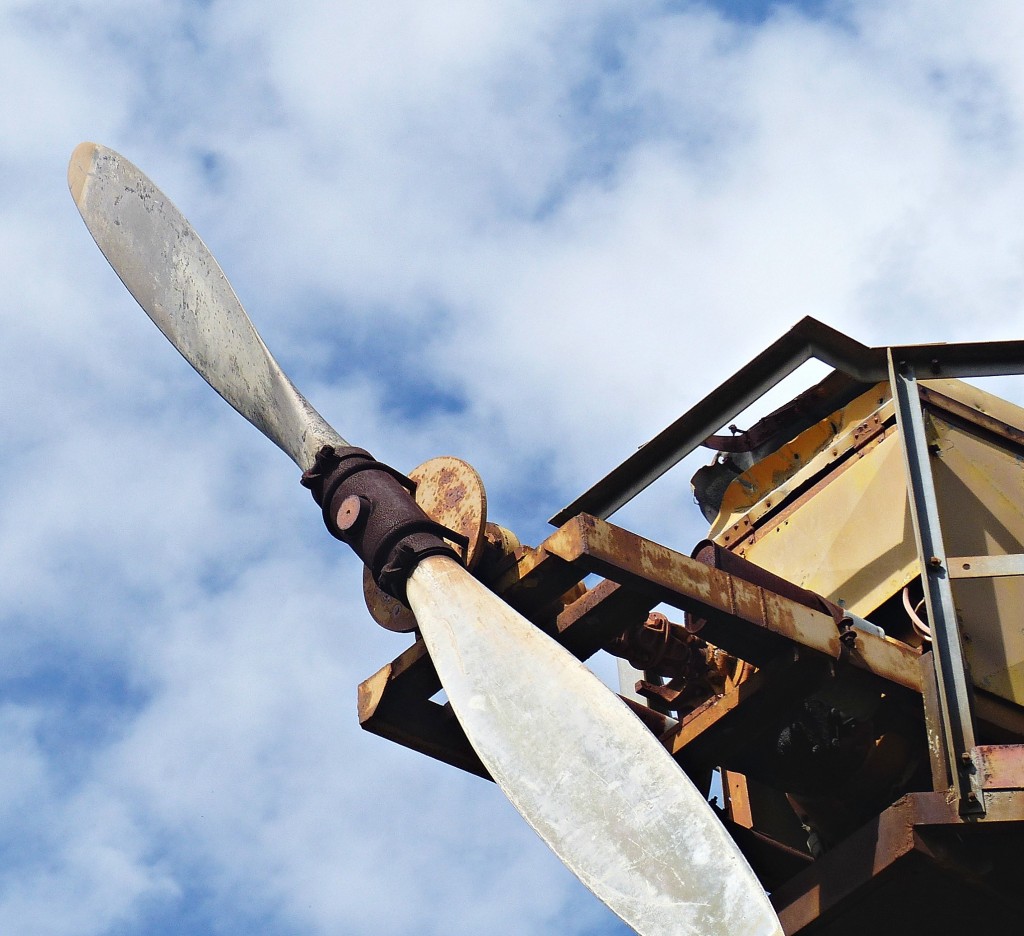 A water pump stands on the ground and I simply couldn’t resist photographing some rusting iron. 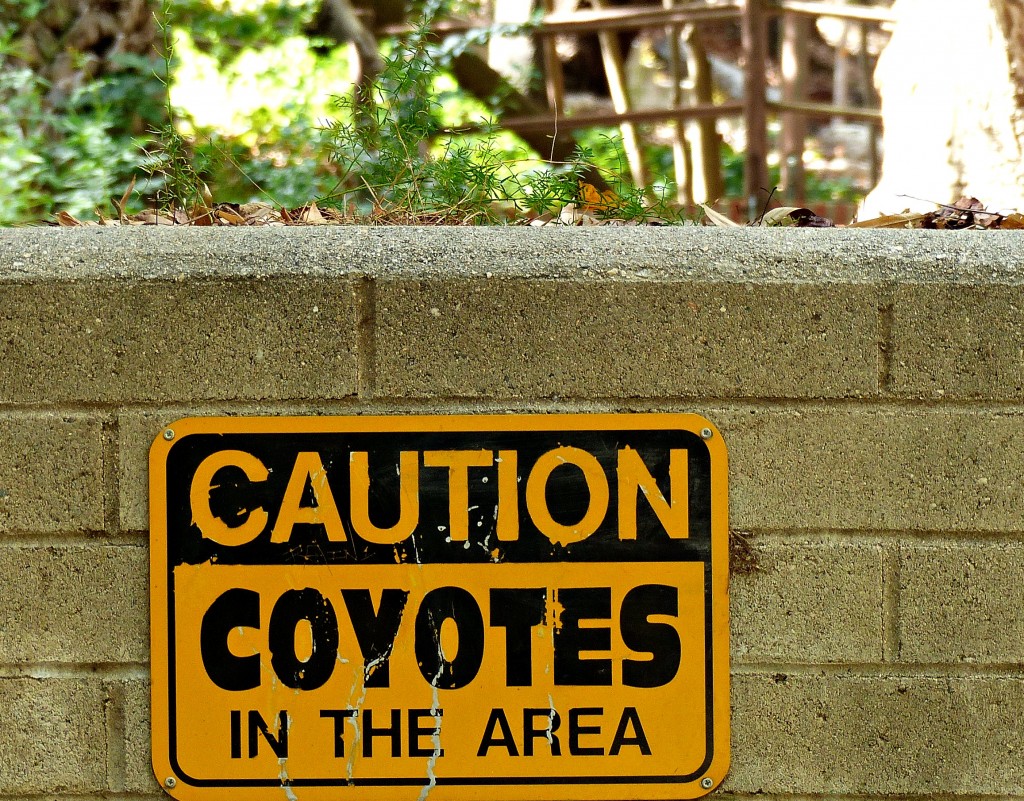 A wonderful connection between Orcutt and these local coyotes, since he discovered the bones in La Brea tar pits he was honored with the naming of the prehistoric coyote – Canis Orcutti, another animal may have been more impressive, but the descendants of his coyote are freely roaming both his ranch and the nieghboring suburban homes.

The adobe home is lovely,  Mary Orcutt lived out her days here,  by the mid sixties this was no longer a lonely ranch, Canoga Park had sprung up around it. 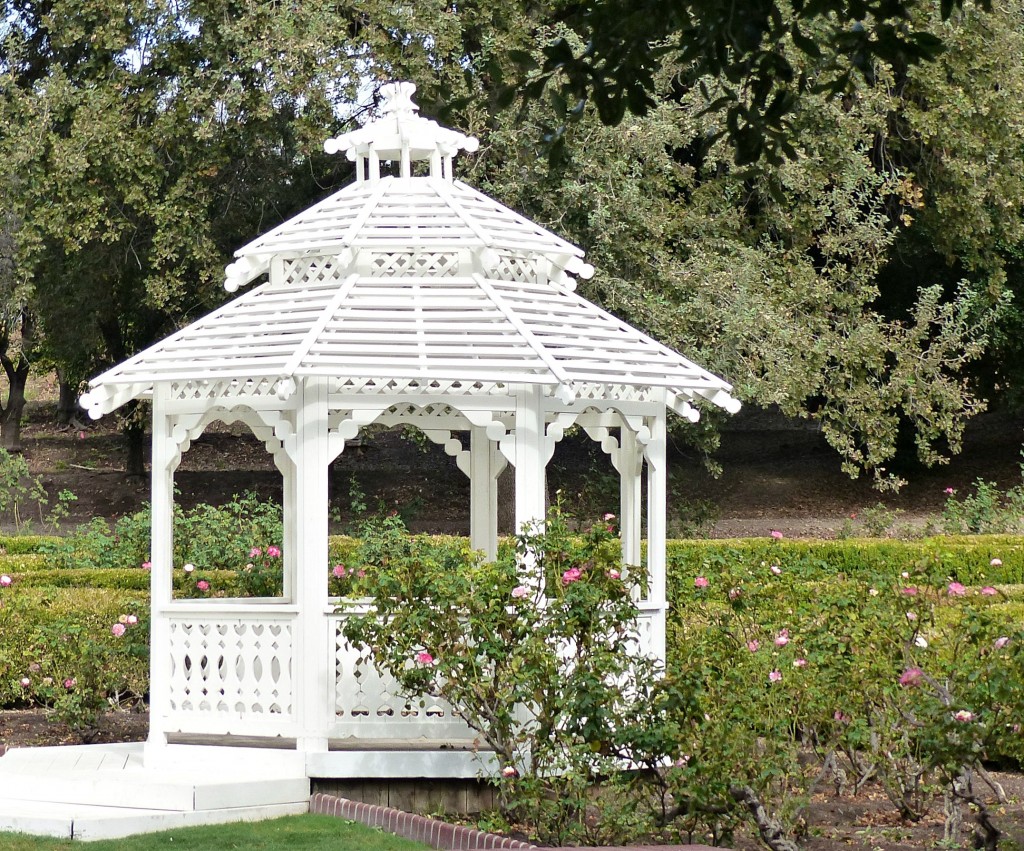 The grounds are open to public,  the house and garden can be rented for weddings or special events. School children come to learn about the history of the valley. 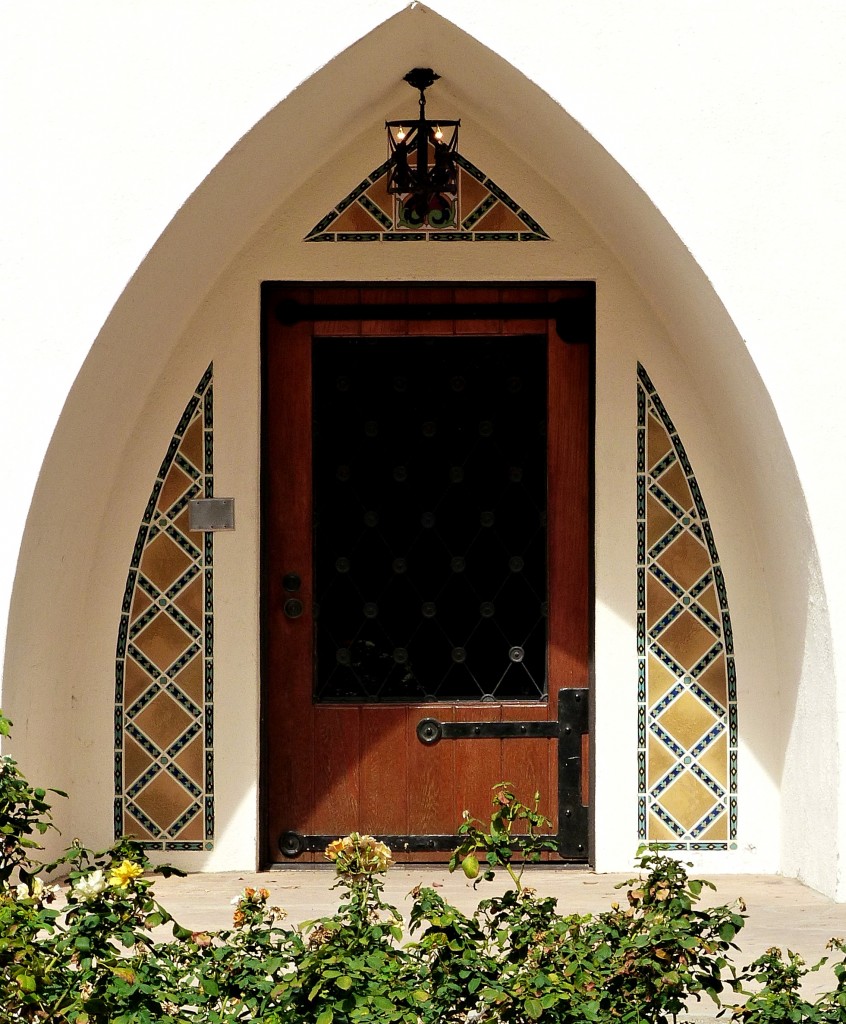 A rose garden and lovely tiles surround the front door.

The large sundial with the famous saying, Grab the day. 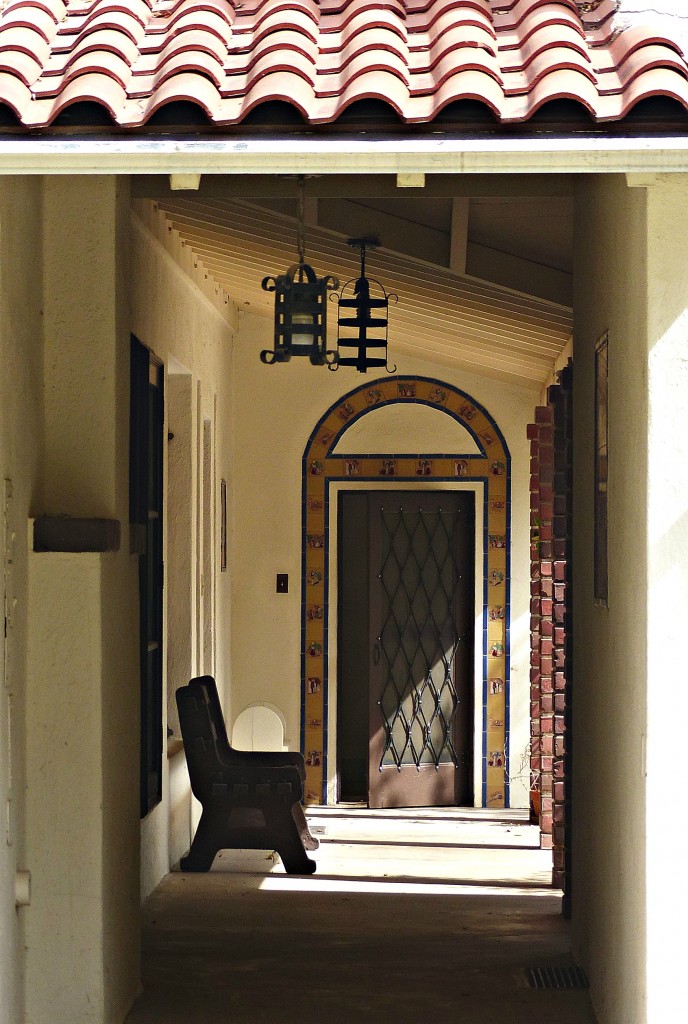 The house is built around a courtyard with a lot of shade. 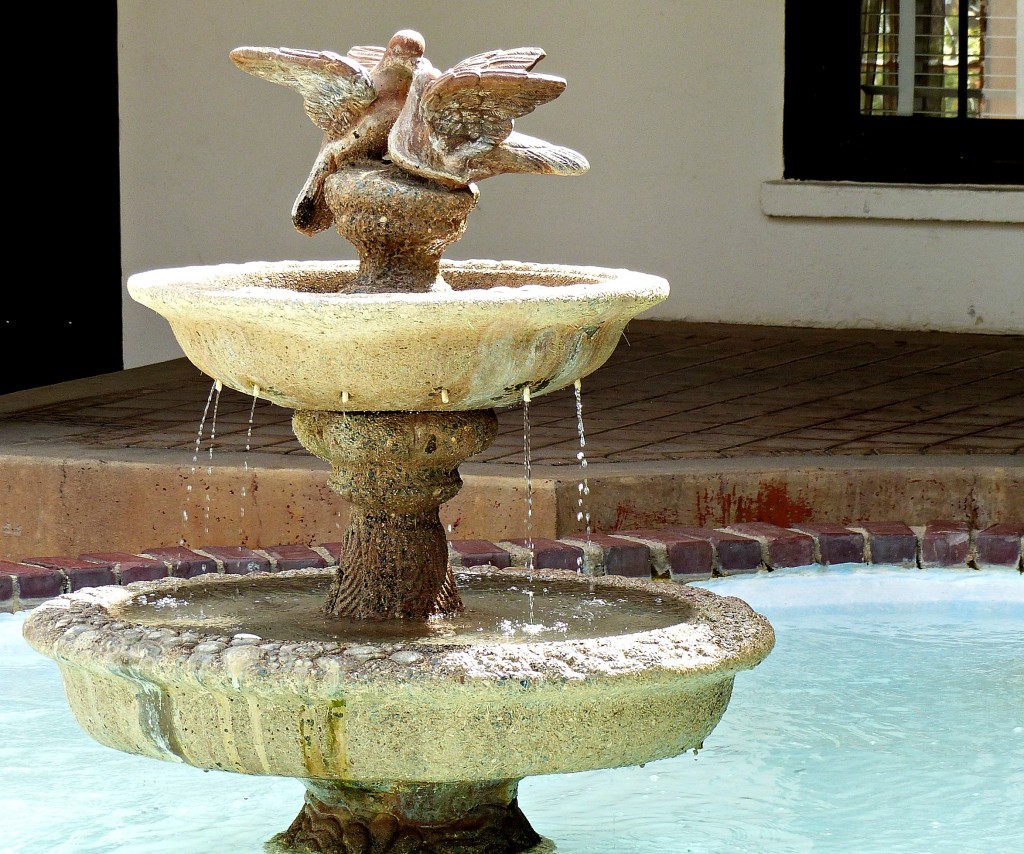 And of course a fountain with fresh water. There is a stream that runs through the property – when it rains. 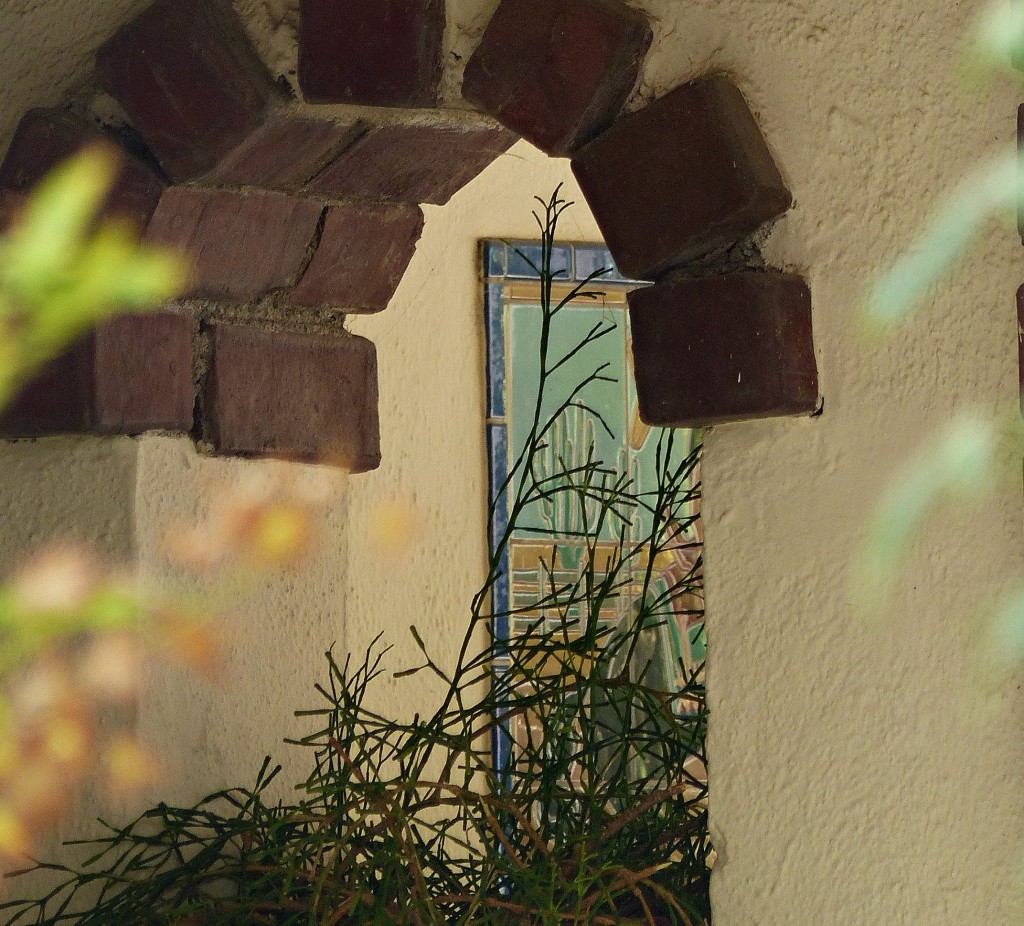 A lot of tiles, both inside and out. 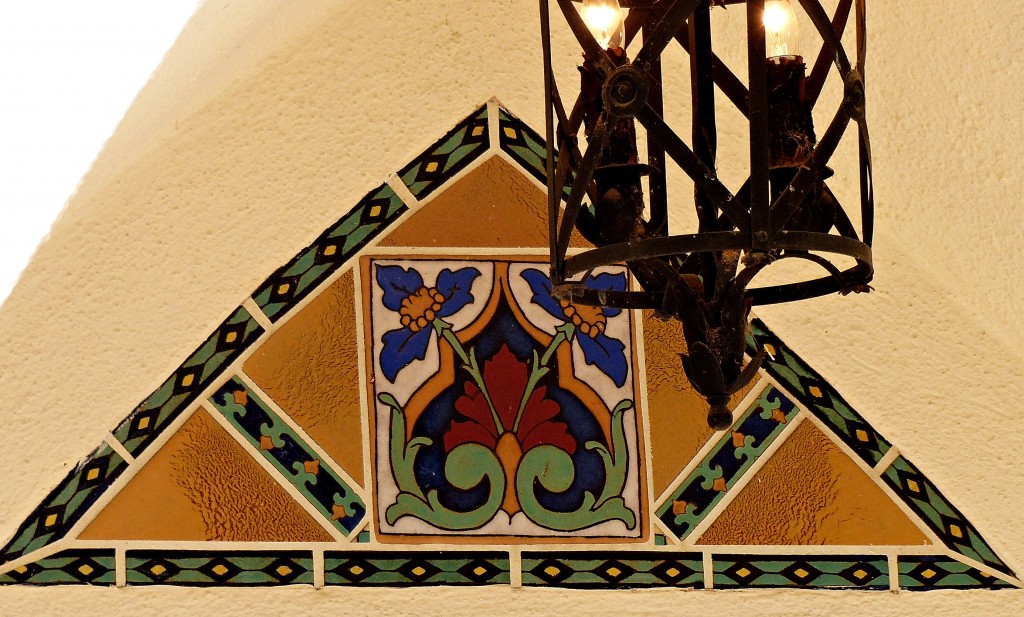 Of course I’m wondering if that discoloration happened during the firing of the tiles or later? I guess I’ll never know. 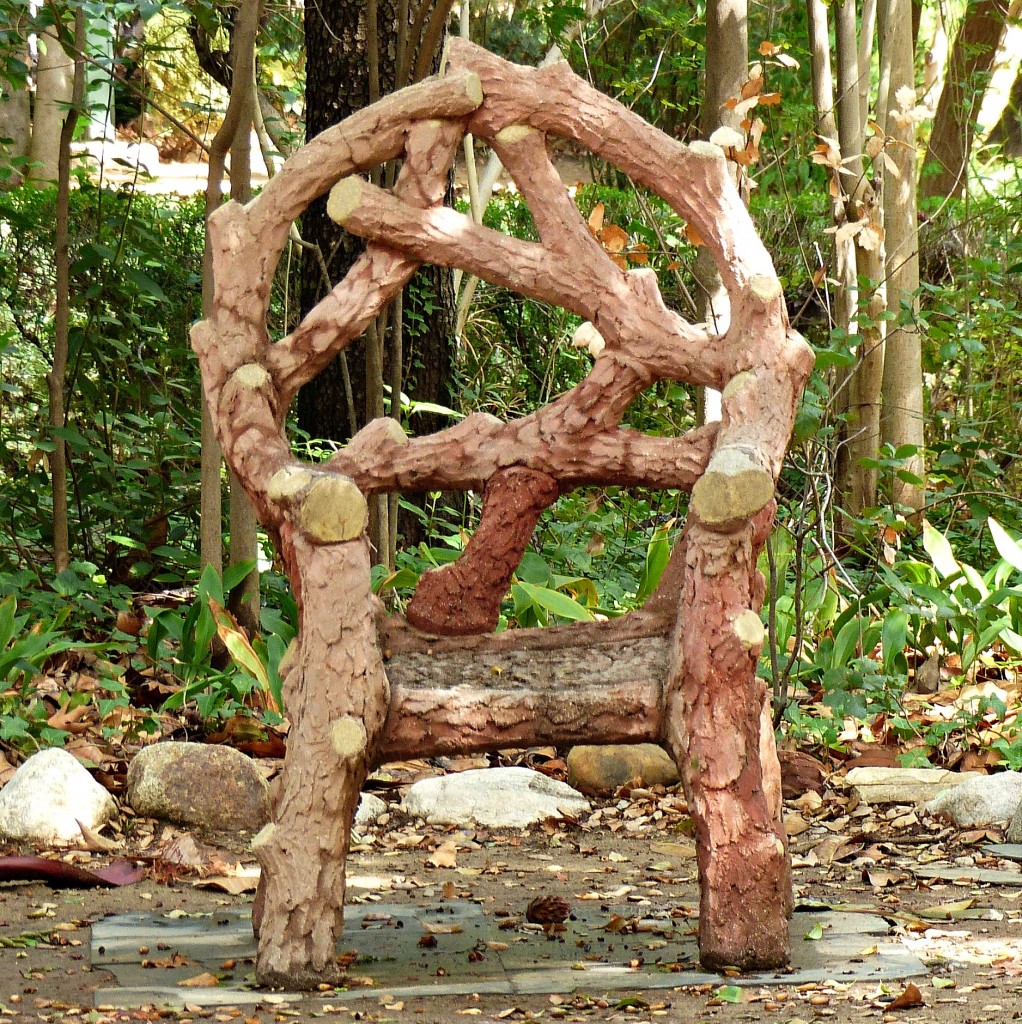 Another material that is used as a decorative element in cement,  so unless someone brings out a cushion I’m not sitting here. 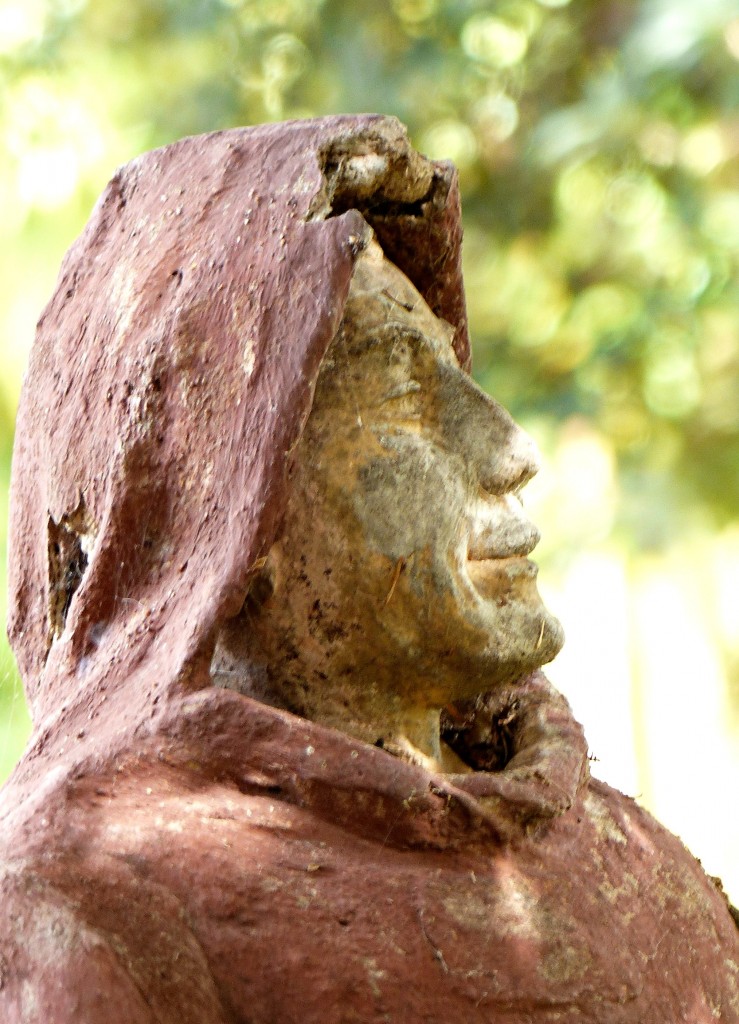 A sculpture of a padre,  no the years haven’t been kind, the concrete is crumbling. 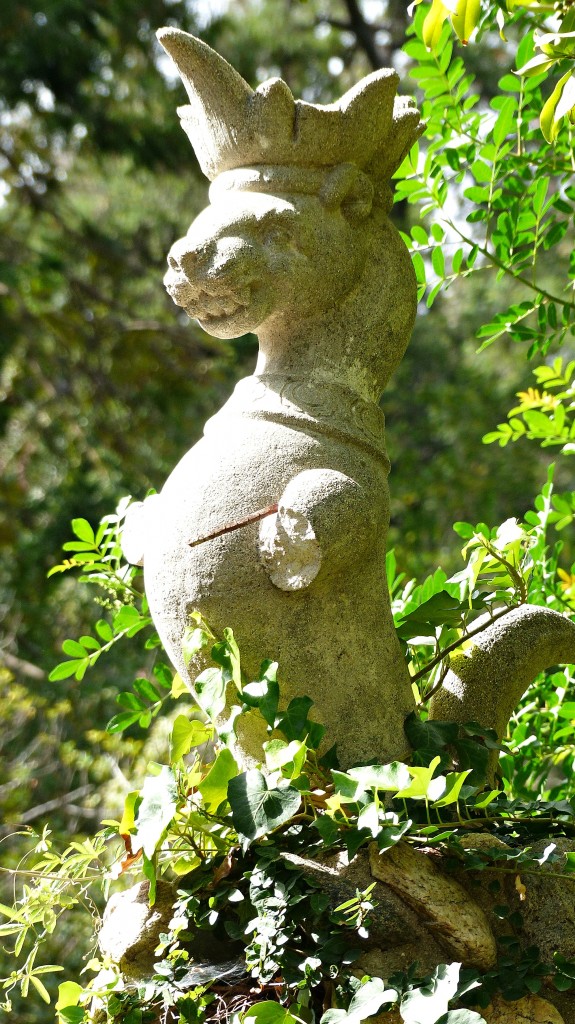 Though not as bad as this mythical sea creature. Who despite the use of rebar has lost his arms, or maybe it was fins, once again, I’ll never know.

One design element that is all over the ranch, on the gate post, on the house is the swastika. No I won’t take pictures of swastikas. I understand that before the Nazis the swastika symbolized good luck and prosperity. I even recall that in the Great Gatsby, Fitzgerald created the Character Meyer Wolfsheim who has a company called The Swastika Holding company. Authors are prescient, in 1925 Fitzgerald had no idea what the swastika would come to symbolize, but it is ironic that the caricature of the Jew, is symbolized by that image. And I’m not cutting Fitzgerald any slack, he was antisemitic, sure, that was all acceptable in his place and class. Interesting how people forgive Fitzgerald because they love his writing, but don’t forgive Washington or Jefferson for owning slaves – when that was perfectly acceptable in their time. 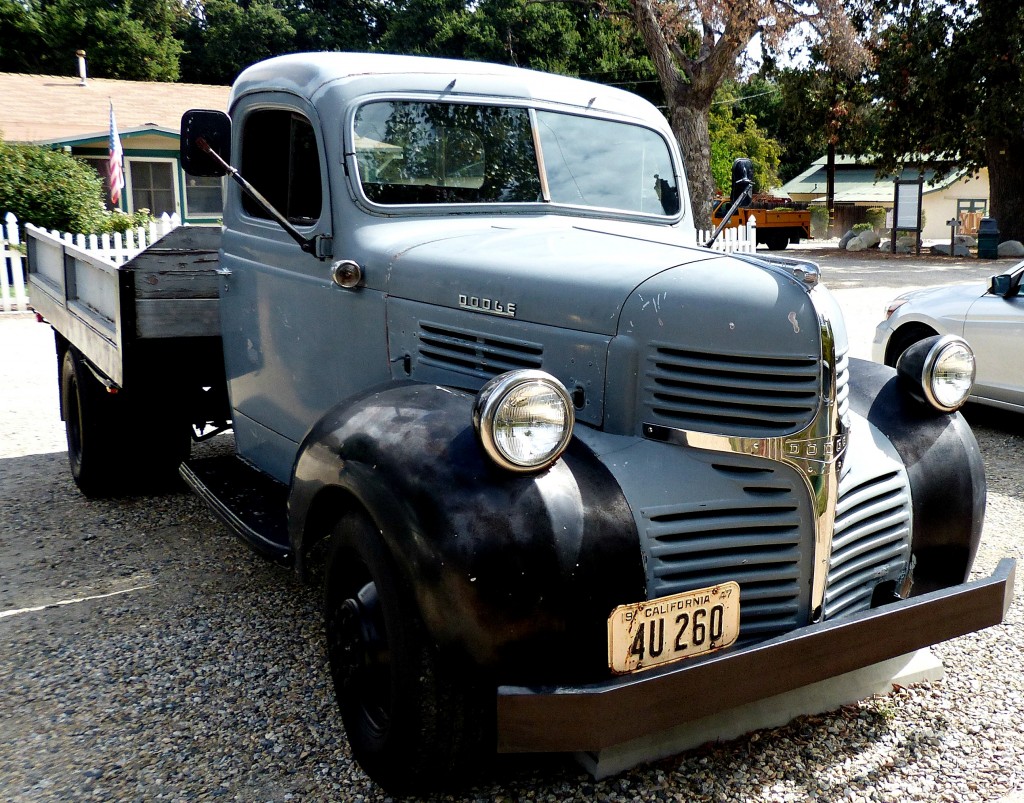 The ranch still functions, I don’t know how much citrus is harvested, but the orchards are well cared for. Also couldn’t tell you that this truck is still used, but it certainly looks like it is in good enough condition to still run.