Every year on the Sunday closest to January 13 a reenactment of  the signing of the 1847 Articles of Capitulation takes place at Campo de Cahuenga. 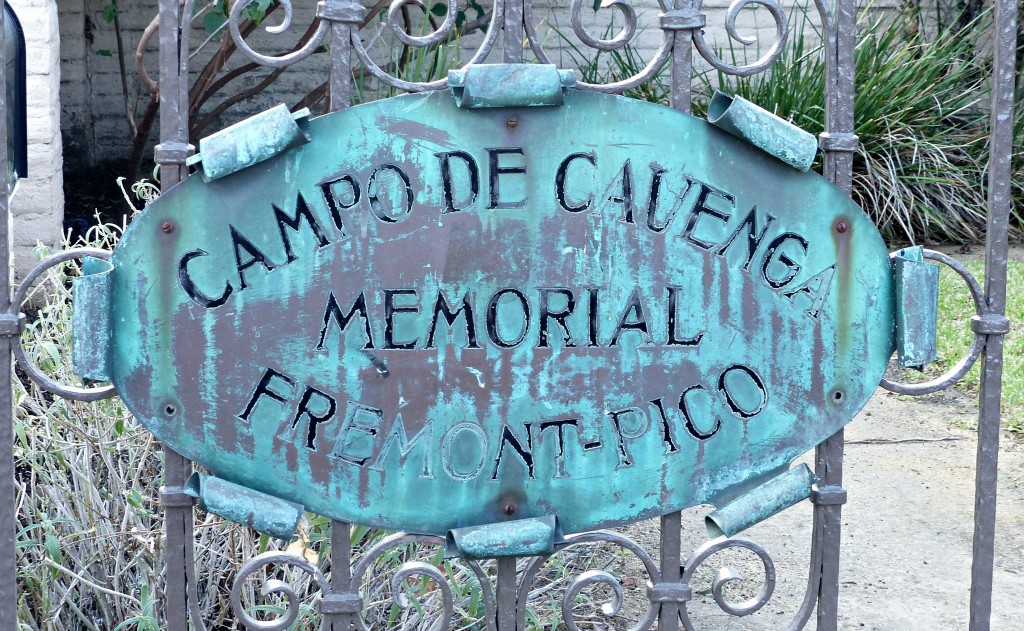 Unfortunately history is something that people have to work at in order to remember.  The signing of the Treaty of Cahuenga between the United States and the Californios was an epic history changing event –  one that no one really knows or cares about.

Of course history isn’t history until many years have passed and by then, it is often forgotten. This modern concept of what the old ‘assestancia’ or satellite mission of Mission San Fernando may have looked like. This structure was built in 1951 an managed to survive Lankershim Blvd, Universal City and the building of the redline Subway station.

The Campo de Cahuenga Historical Memorial association was started by an incredible woman names Mrs. A.S.C Forbes, no I can’t find her first name. She ran a foundry – she did, not her husband.  This is one thing that I have noticed, women weren’t helpless before feminism showed up in the 1960s, there have always been strong powerful women who never needed feminism to find their voice.  One thing that Mrs. Forbes did was design the original Mission Bells as well as the Camino Real Bells. Anyone who has driven along the 101 has seen these bells along the freeway. This is one of the first bells cast, it is indoors now to protect it, California Bell company is still producing them today. 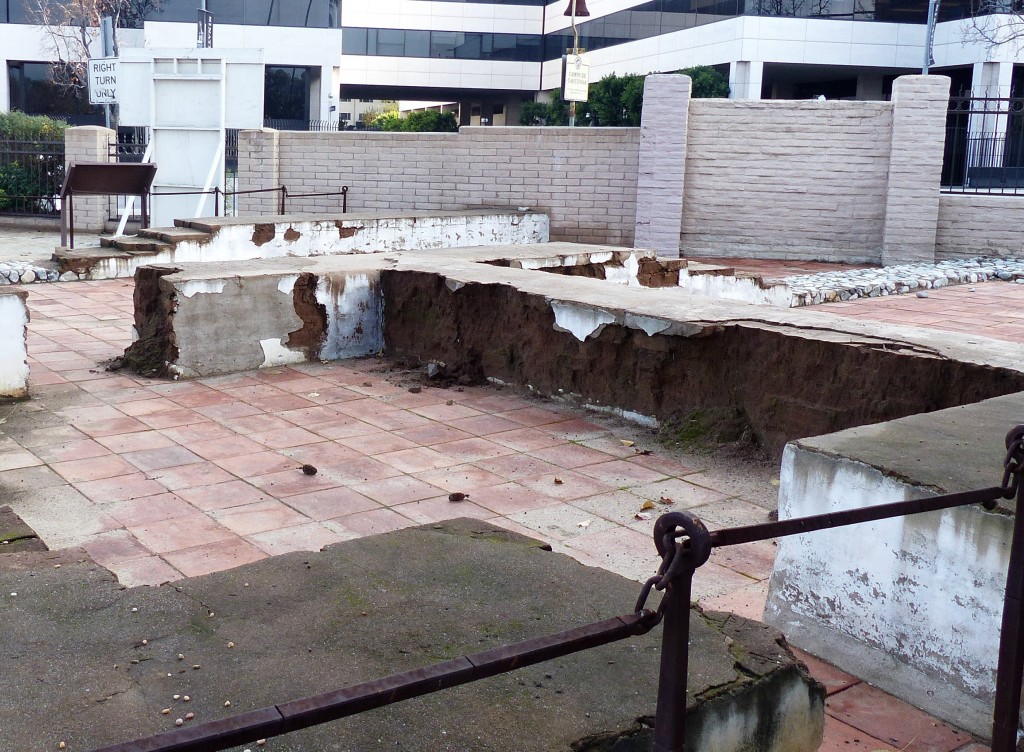 When excavating for the Subway the real remnants of the Abobe Farm building were found. Nothing here is real except the footprint. The adobe is reproduced, and is slowly melting, adobe homes always had impressive roofs (over covered with local tar- La Brea) that kept the water from melting the bricks. 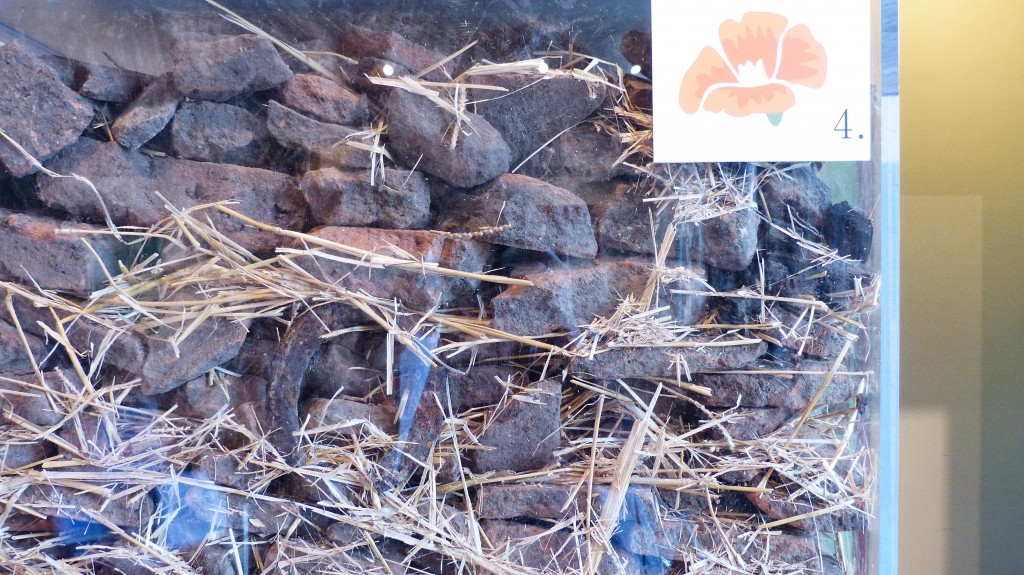 This glass case hold the remains of the floor tiles, since these are clearly Spanish, the satellite farm was probably built around the time the actual mission was. 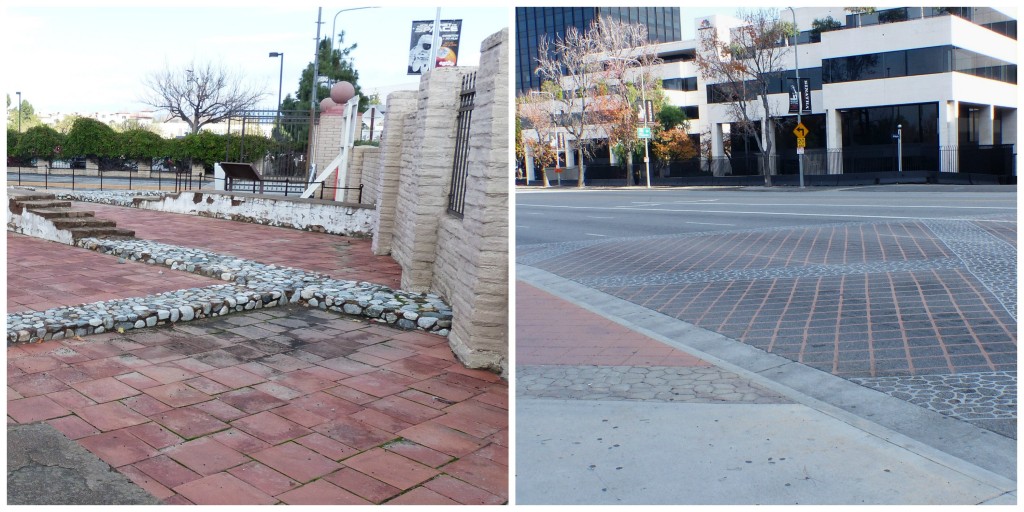 It turns out this was quite a large structure, went all the way into the middle of Lankershim Blvd.  As an homage to the old adobe, the footprint is continued into the pavement of the street,  no-one driving over this has any clue. They are building a bridge to connect Universal Studios with the Subway station, so maybe they will put a sign up so as people cross the bridge they might learn something. 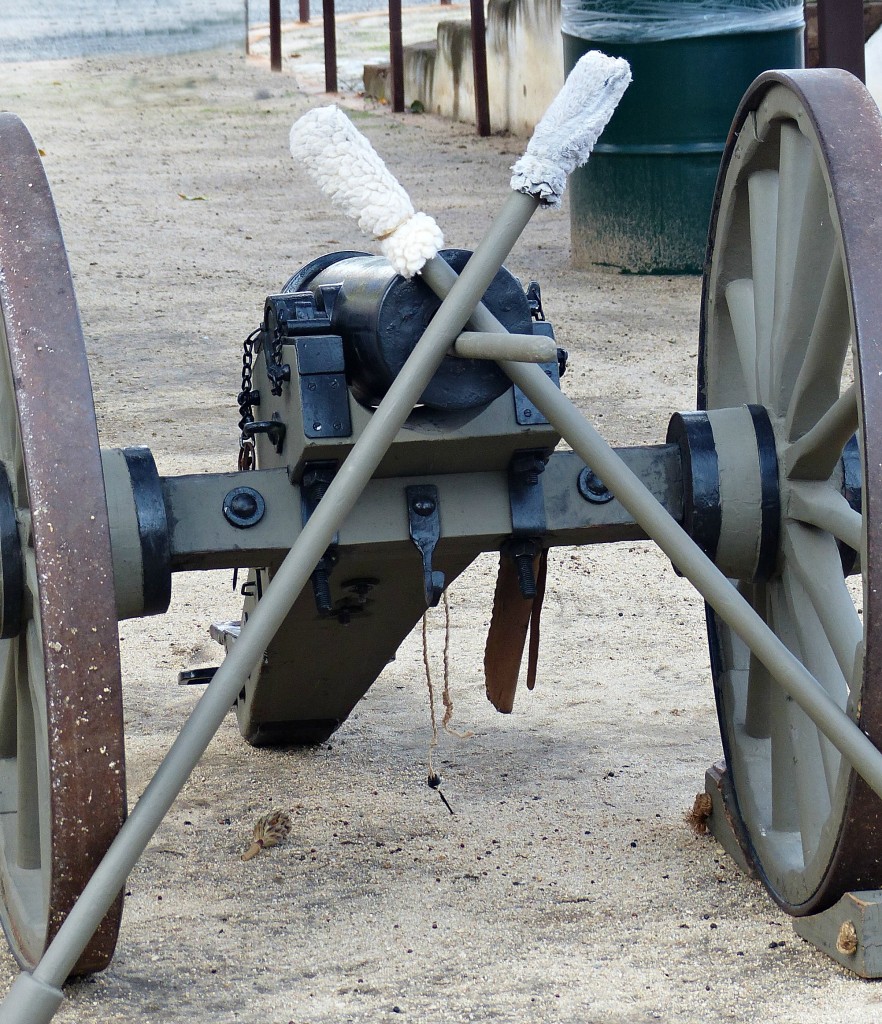 As the program itself started a boy scout troupe raised the flag, this  howitzer was fired. There were speeches by local politicians, they have to be heard at some point. 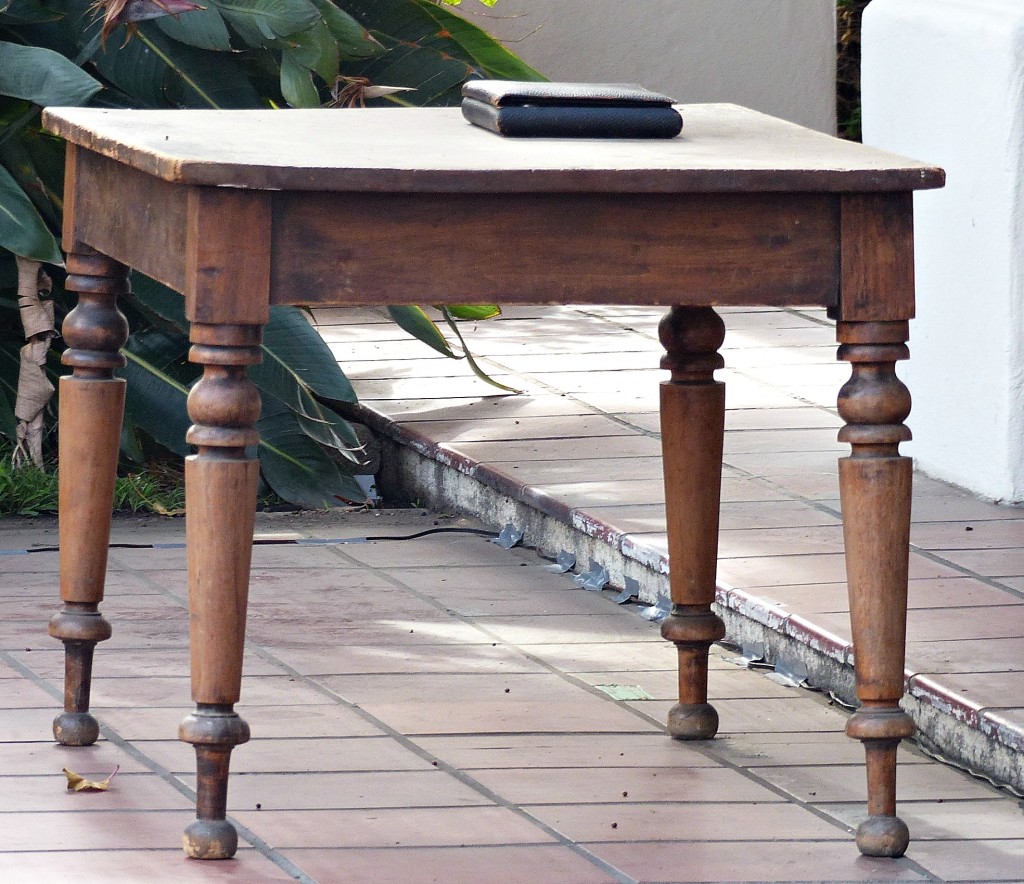 It was mentioned that this was the original table that the treat way signed on.  At the Time American soldiers were in  Monterey, but this wasn’t even an American territory. California was enjoying a very brief period of being an independent country although the Californios tended to side with Mexico.  So the treaty wasn’t between nations, rather between warring armies. John C. Fremont represented the United States and General Andres Pico, brother to Governor Pio Pico, represented the Californios.   This ended the military hostilities in California and opened the way for Manifest Destiny, a transcontinental United States. 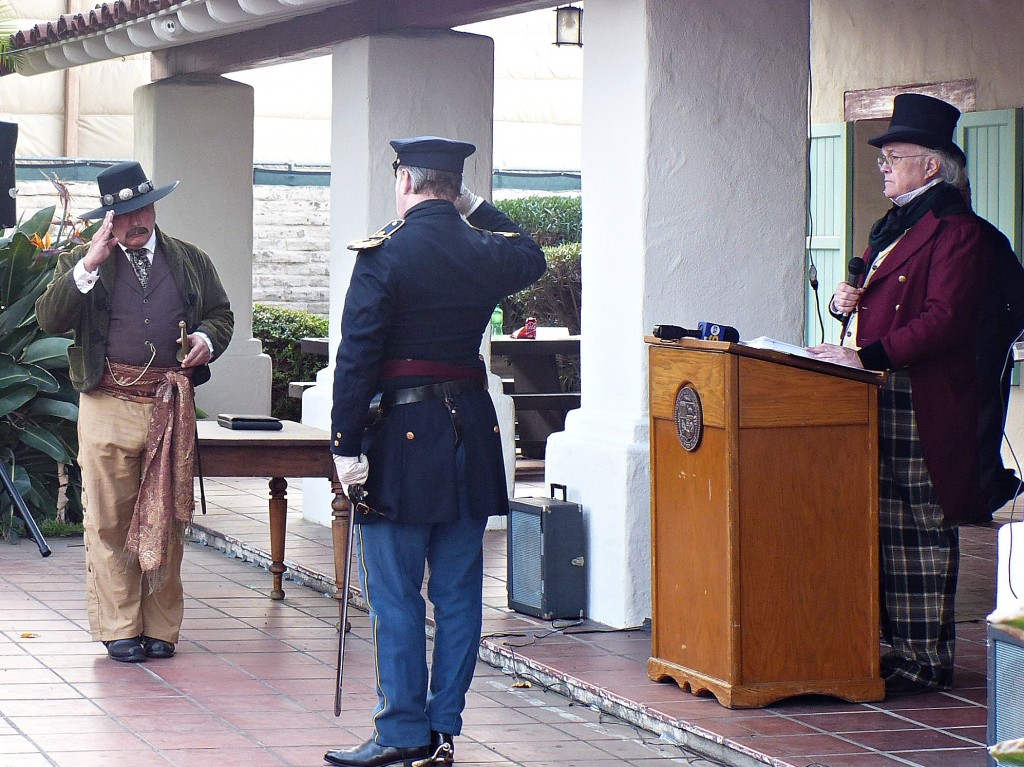 Our presenter looked like a Charles Dickens character, which makes sense, because this is when he was writing.  Fremont and Pico meet. 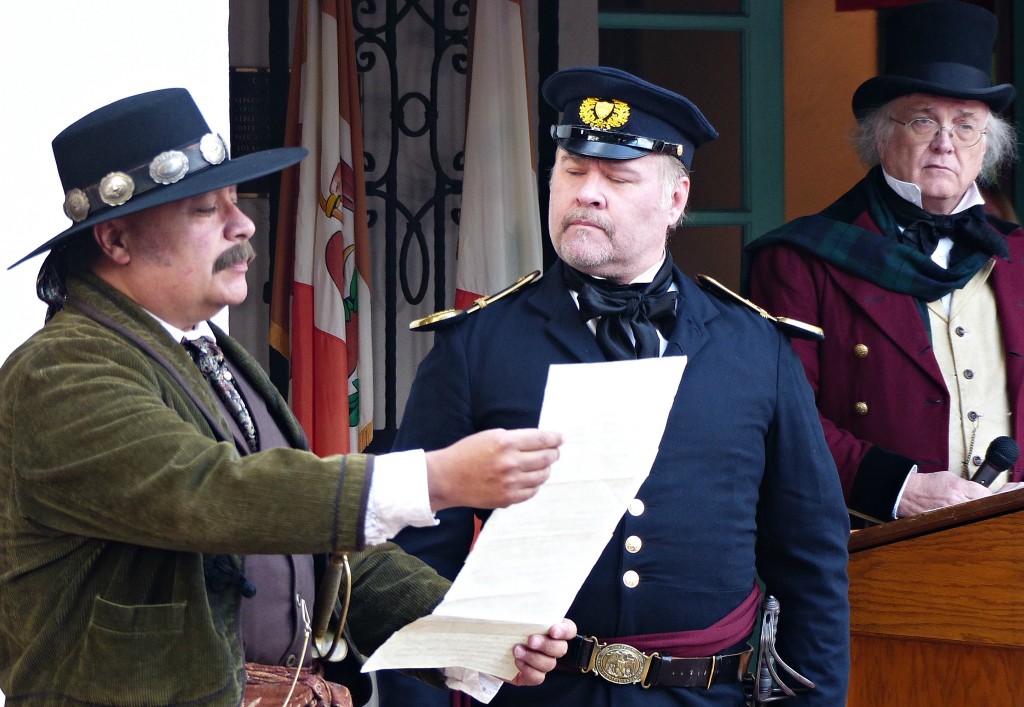 Reading the treaty, which pardoned prisoners from both sides and gave Calfironios the same rights of American citizens.  General Stockton wasn’t pleased, although he came to see this as a very good treaty. All this happened a  year before the Treaty of Guadalupe Hidalgo ended the war and the southwest officially became part of the US. And then in 1949 gold was discovered at Sutter Mill and by 1850 we  were already a state. 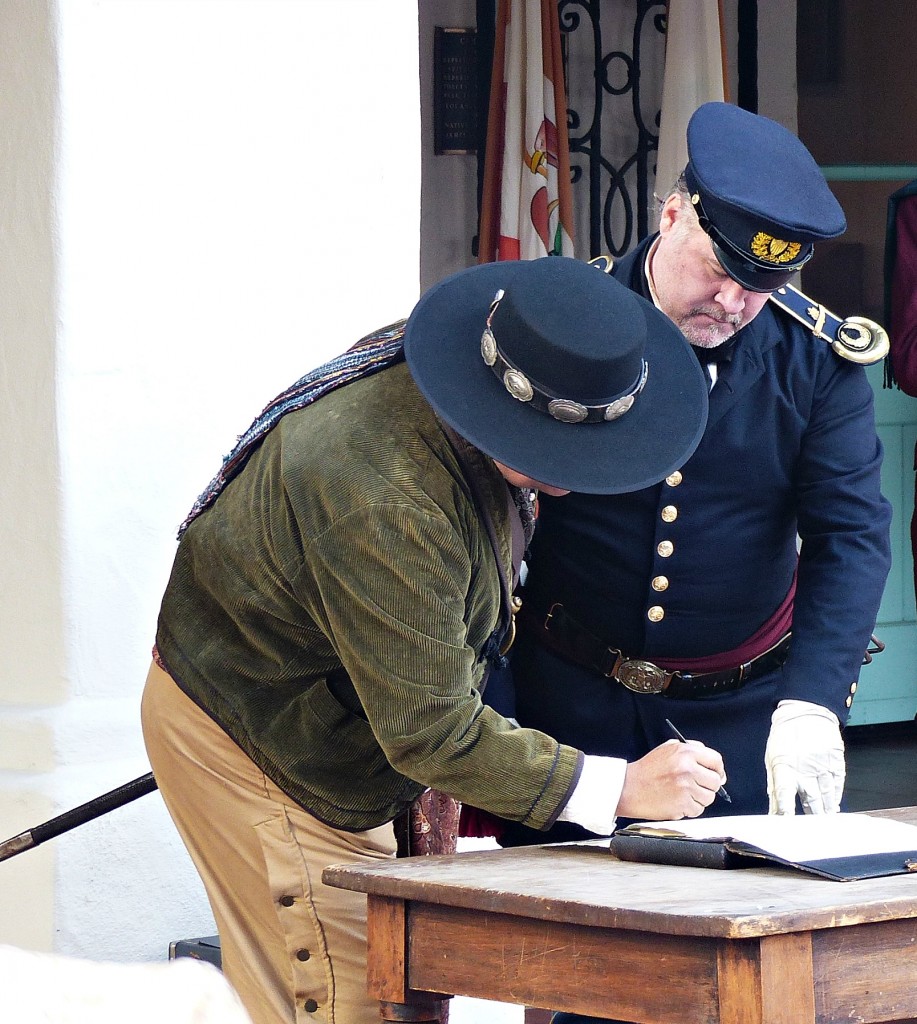 Signing.    Of course you need more than just the reenactment, so why not have some traditional dances. 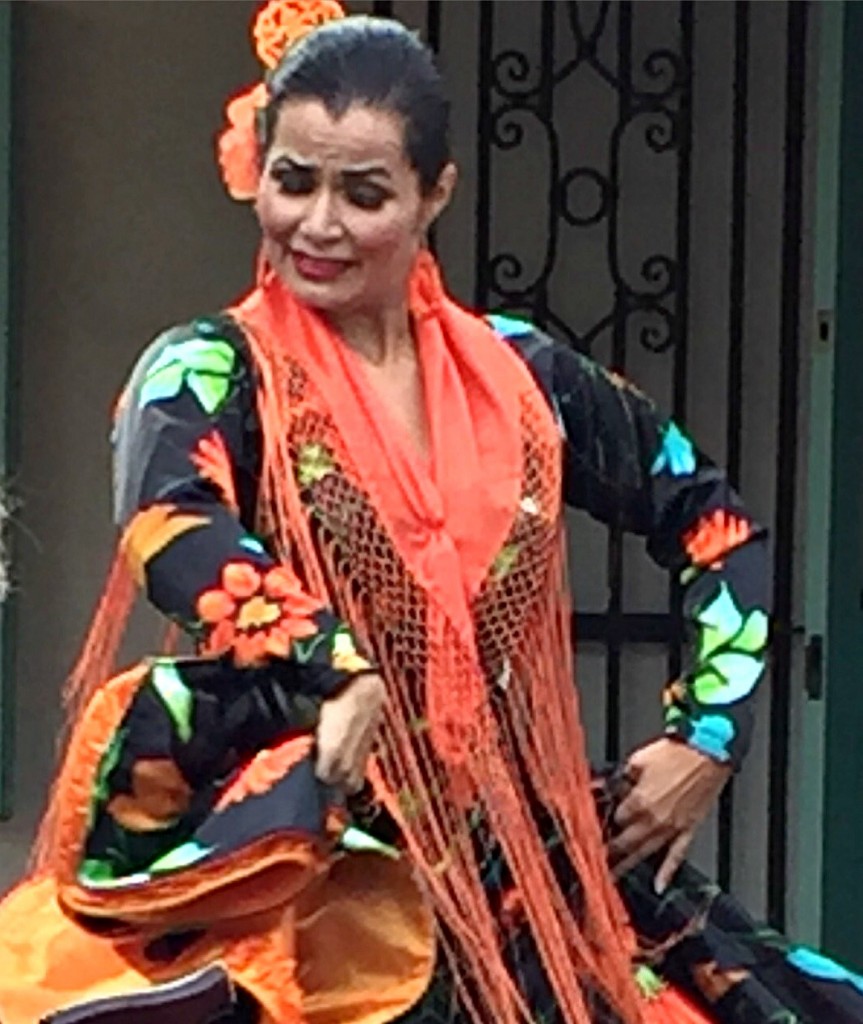 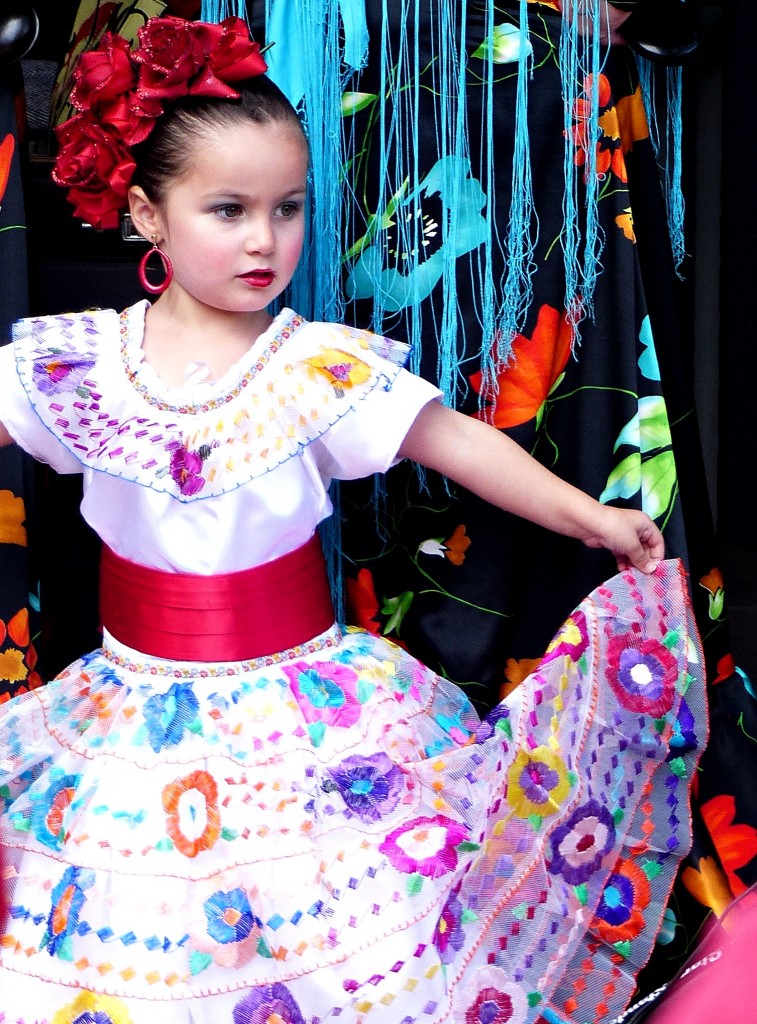 With an adorable little girl showing off her finery. Shira is probably older than her, but no way could she just stand there so quietly.

Although today this is a very busy intersection, it has a very important place in not only the history of Los Angeles but California, the west and the United States as a whole.  Very glad it’s right in my neighborhood.