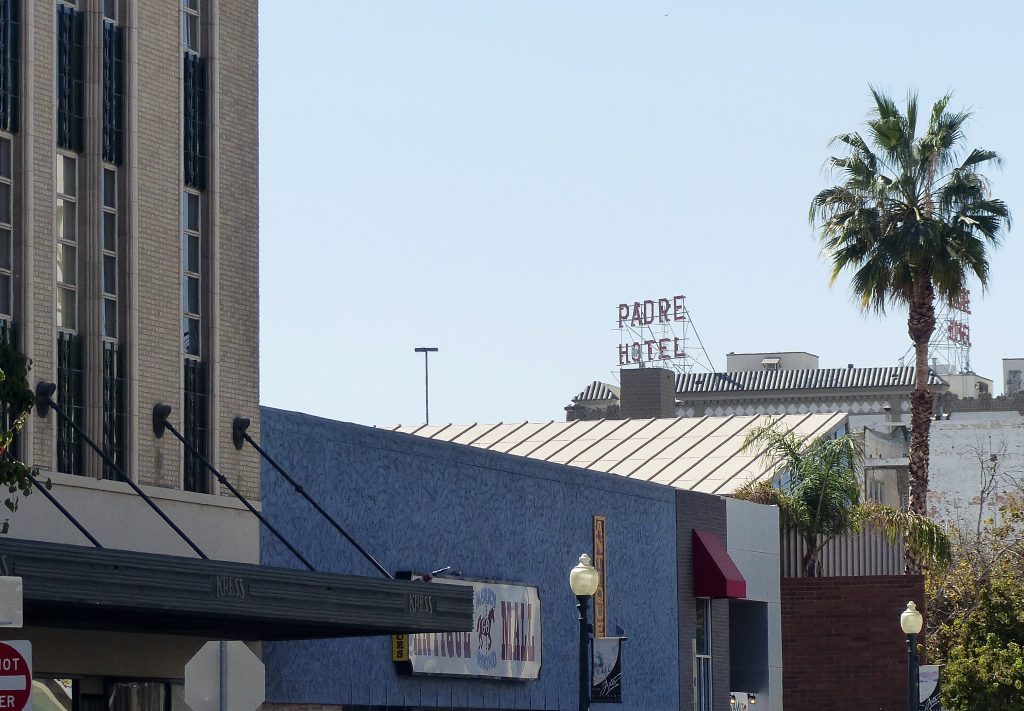 Standing outside Woolworth, looking over at the neon sign of the Padre Hotel. Time to head over and check it out. 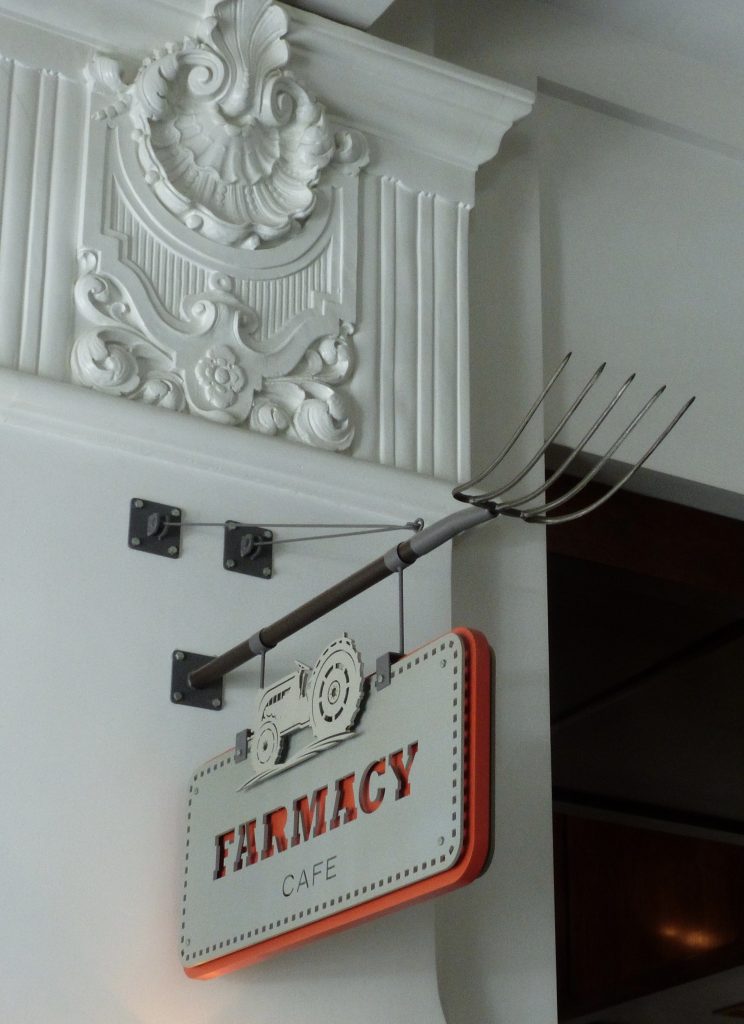 The hotel was built in 1928 and renovated a few years ago. I just took a few pictures. I just love the name and design of the cafe. Sort of harkens to the idea of a lunch counter in an old drug store. But look at the real pitchfork and the little tractor. Someone is extremely creative. 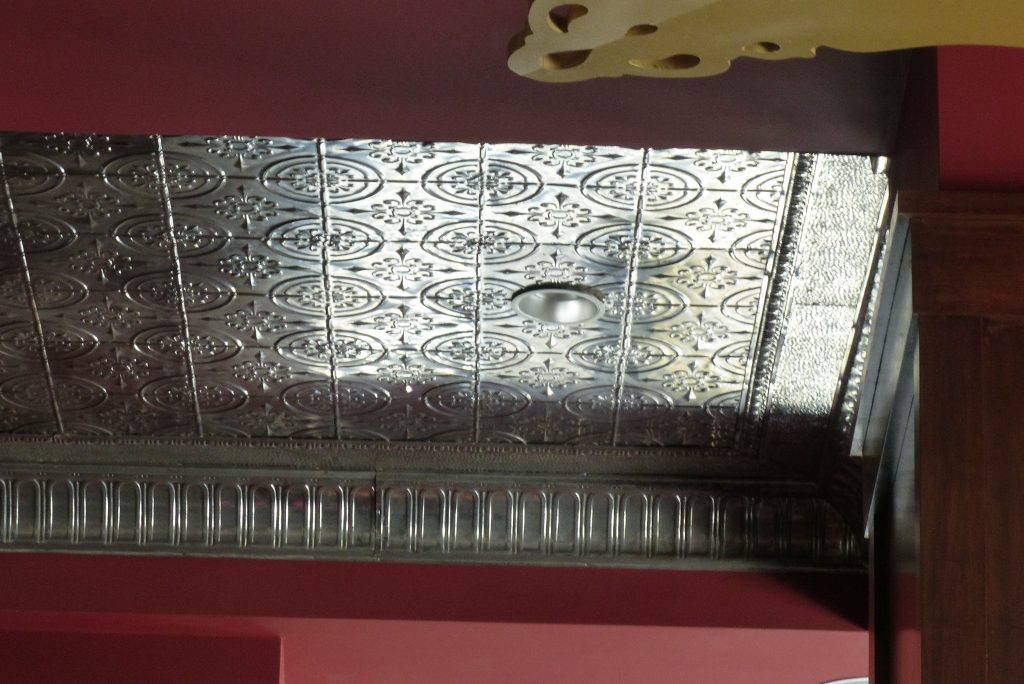 The tin ceiling in the bar area. 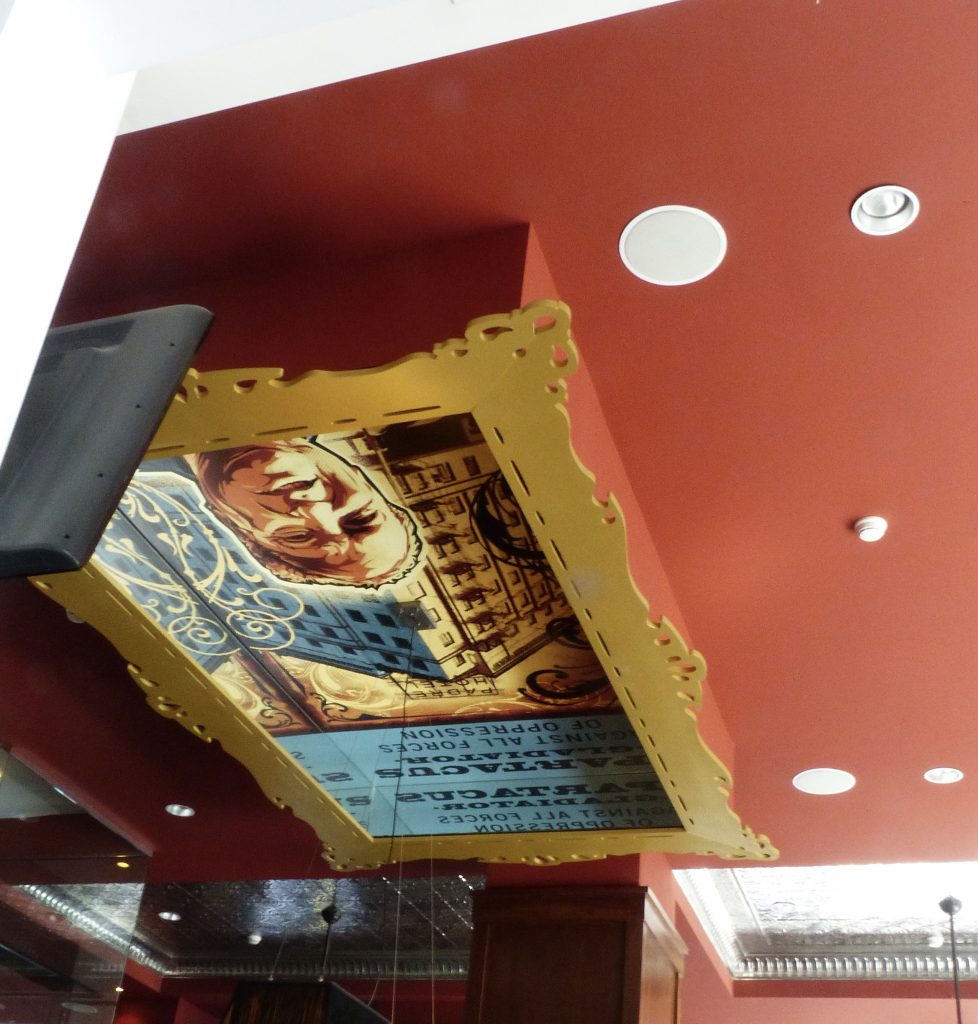 As well as this image on the ceiling, celebrating the hotel. I stayed in a Holiday Inn Express, which actually exceeded expectations. But this place looks really cool. The cafe, restaurant and bar were all hoping in the middle of the day. 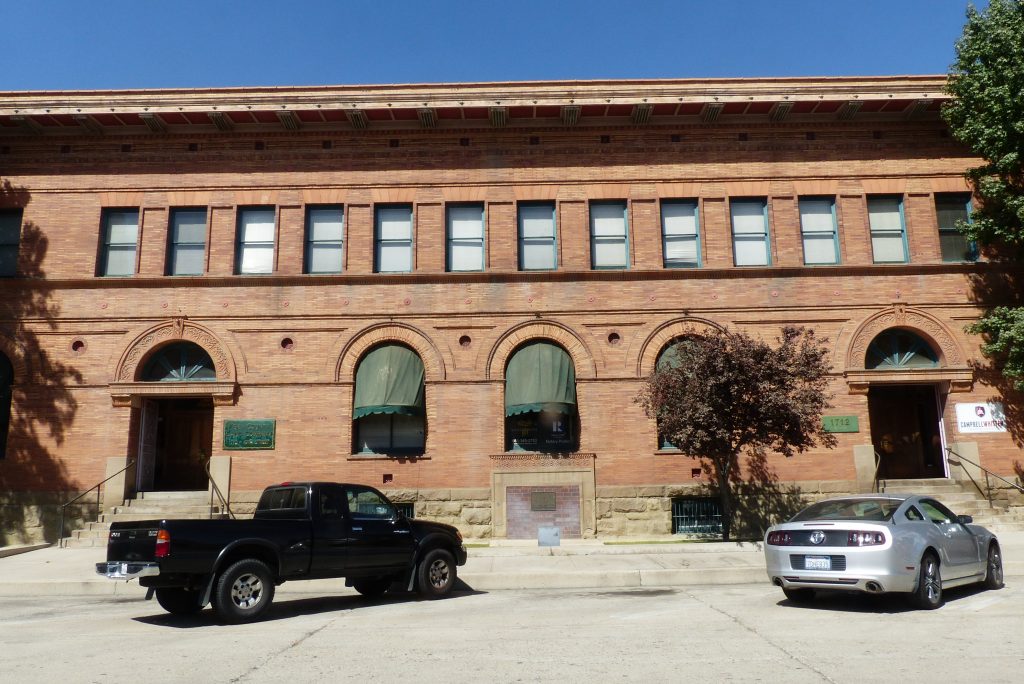 Back outside, a Beaux Arts building made of brick with that flat overhang of a roof. Built in 1894 as the Kern County Land company building.  It survived some serious earthquakes as well as that desire to tear down old buildings. 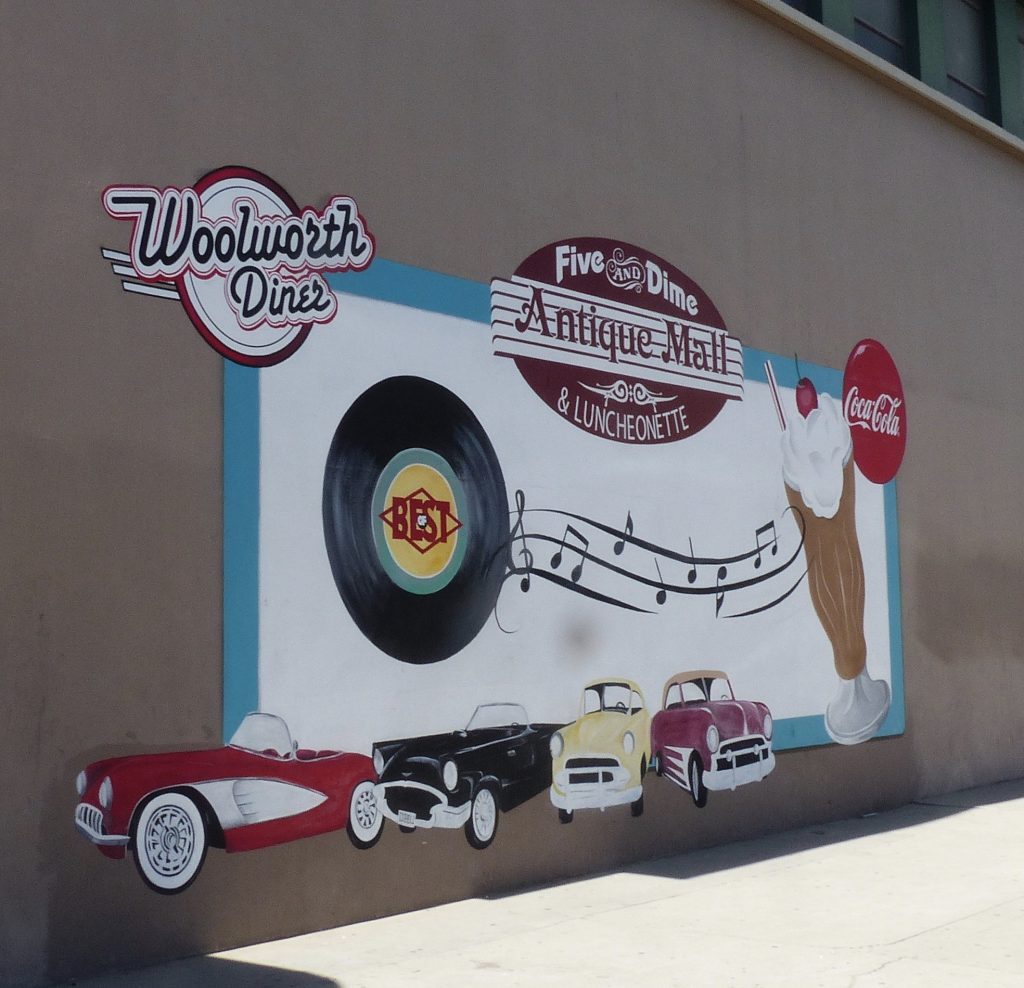 I’m happy to say that many towns love murals, Bakersfield is no exception.  This is on the side of the Woolworth building. 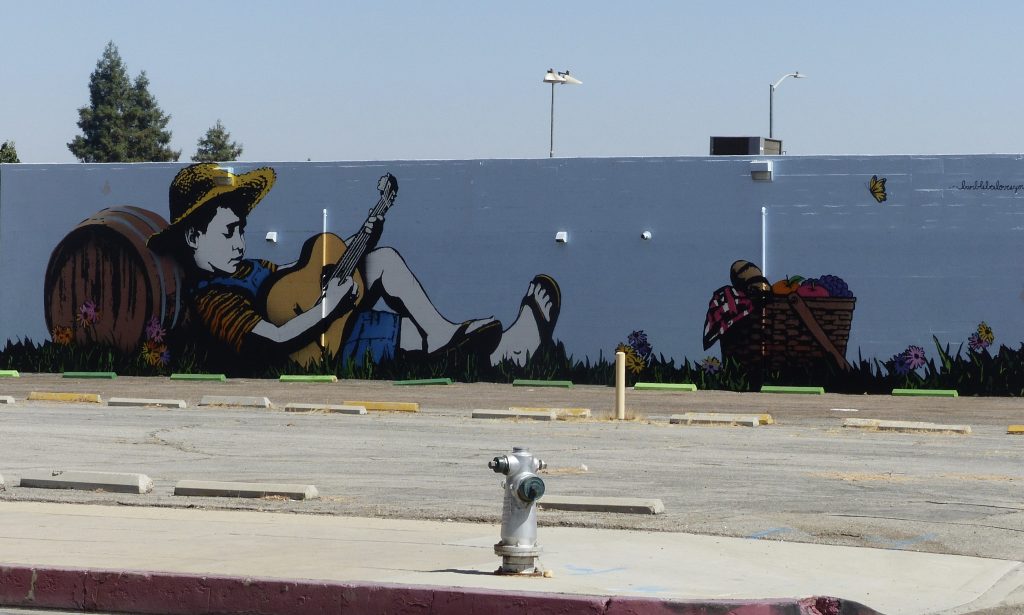 Around the corner is this massive mural, country music and a picknick basket. Unfortunately, the empty parking lot tells a lot, not much is happening here. 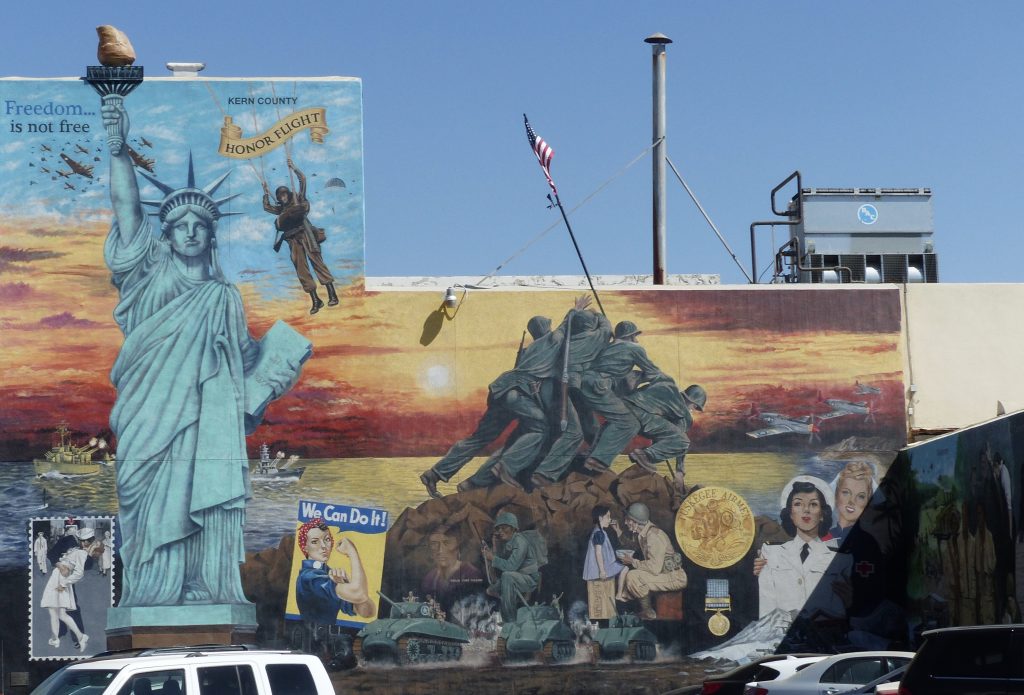 Two years ago Zachary Thomas painted this large mural honoring American War Veterans.  From the Statue of Liberty, through a number of wars up until the wars in the middle east. I love how the statue has a three dimensional flame and the Iwo Jima Marines are raising a real American flag. 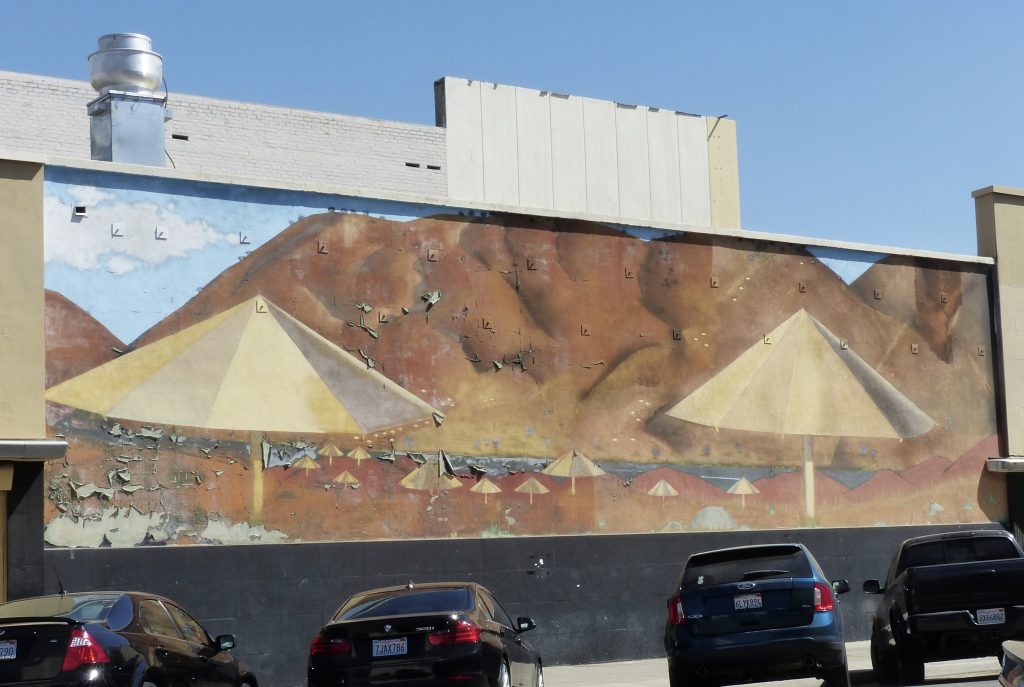 Then there is the mural that really isn’t aging well. 30 years ago the artist Christo came to the Bakersfield to assemble his installation, yellow umbrellas in the Tejon pass. I was newly arrived in Los Angeles and I wasn’t very adversome in those days, so I didn’t go see them.  Just before they were removed a very strong wind killed a young woman who viewing them. Tragedy happened.

So I guess at some point someone painted this, probably around the time of the exhibition. Sad and peeling, I bet most people have no clue what this mural represents.

During the sewing retreat, a bunch of us went to Dewars, the ice cream parlor, it is on Eye st.

This is the candy section, which was empty, the counter and tables in the ice cream section were packed with people. 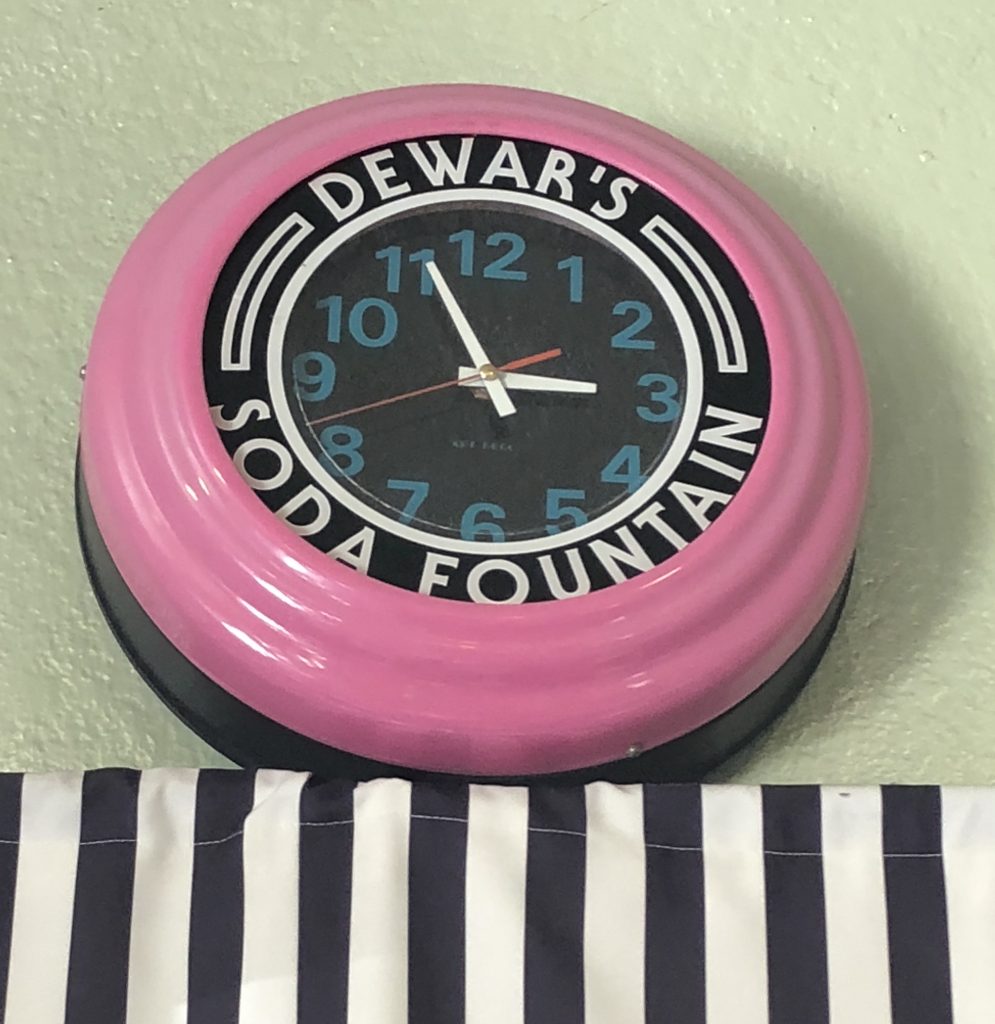 Everything here is old time. We took a number, then gave in our order and when it was delivered to us, then we paid. 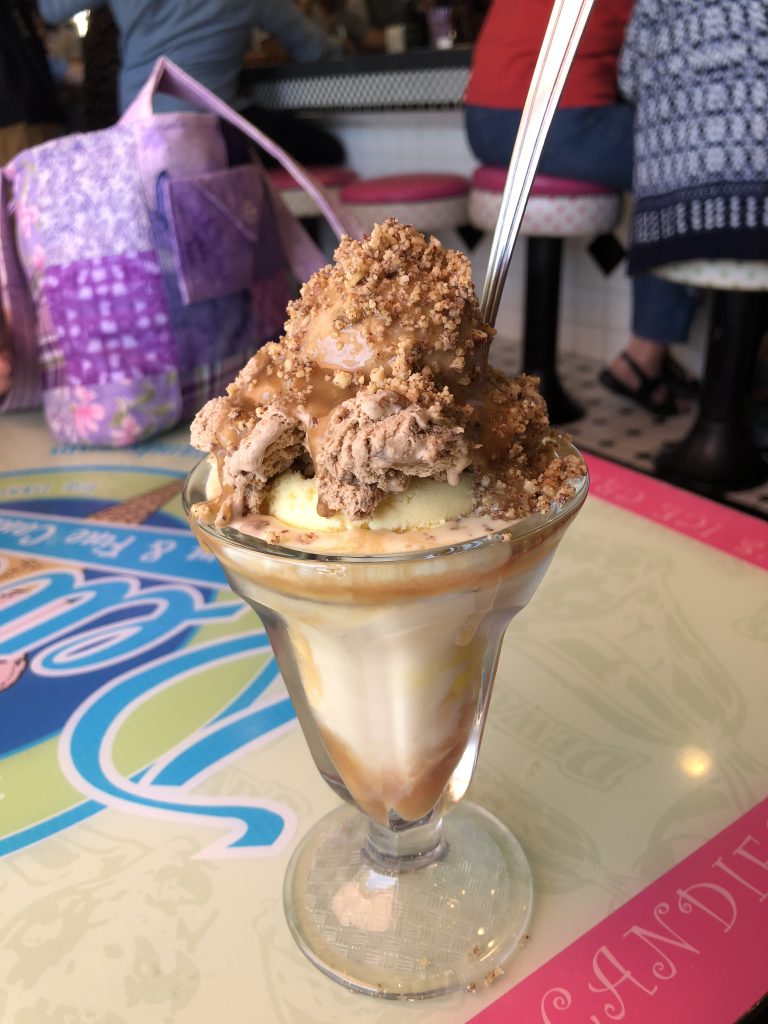 I got a double scoop Sundae with caramel sauce and nuts.  Another reason to get out and explore. Btw, we initially parked around the corner, it said Dewars, might have been their old plant. Someone across the street saw us and shouted over to us that the actual ice cream parlor is one block down. Who says people aren’t friendly and helpful?