I really loved Quebec, even though someone in Montreal stated very clearly: Quebec is government and tourism. Very true, but they do tourism very well. 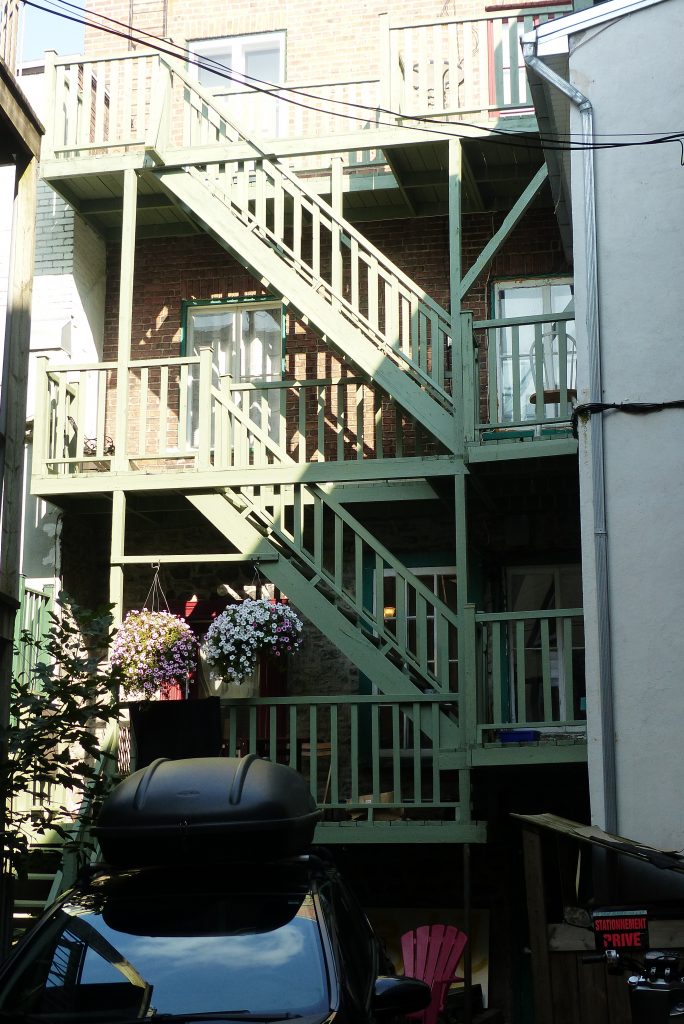 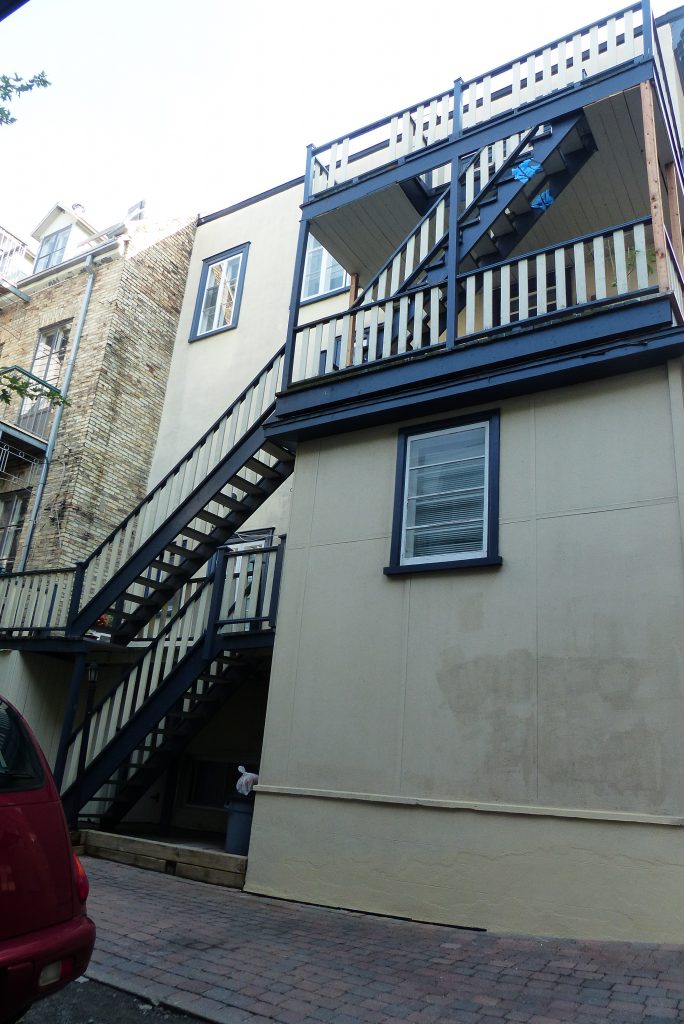 Those staircases! I just can’t get over them, with all the snow and ice how are people not slipping and falling? You’ll never find me living in that climate with that kind of trek just to get to the front door. 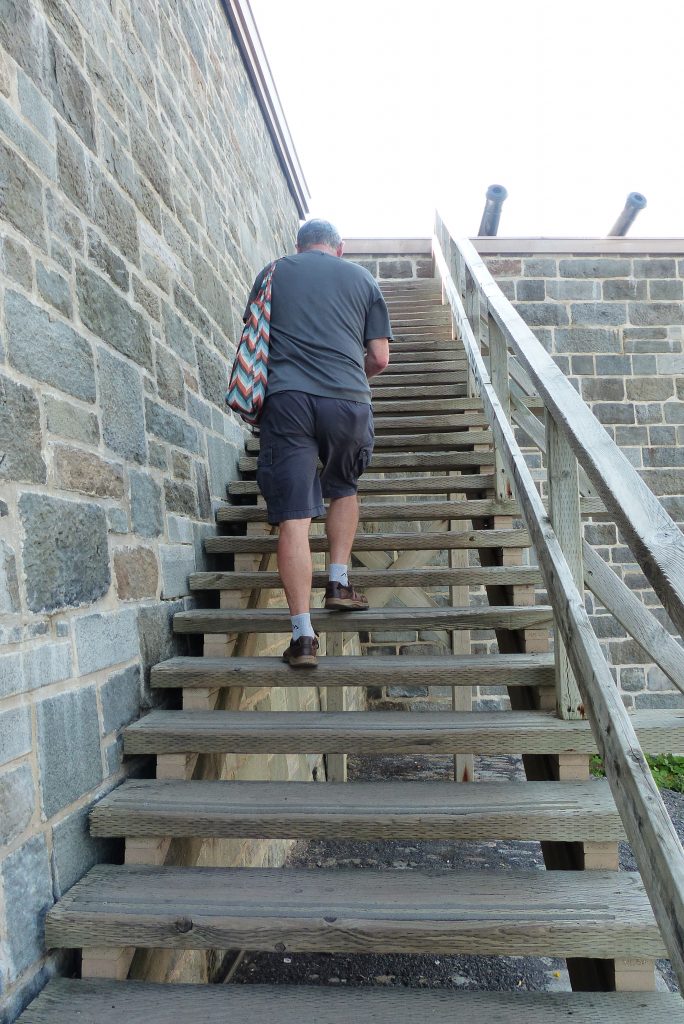 There are plenty of stairs outdoors, it’s a walled city, with many points in and out, not just gates. Most stairs were stone, but this looks like a newly renovated wooden staircase. 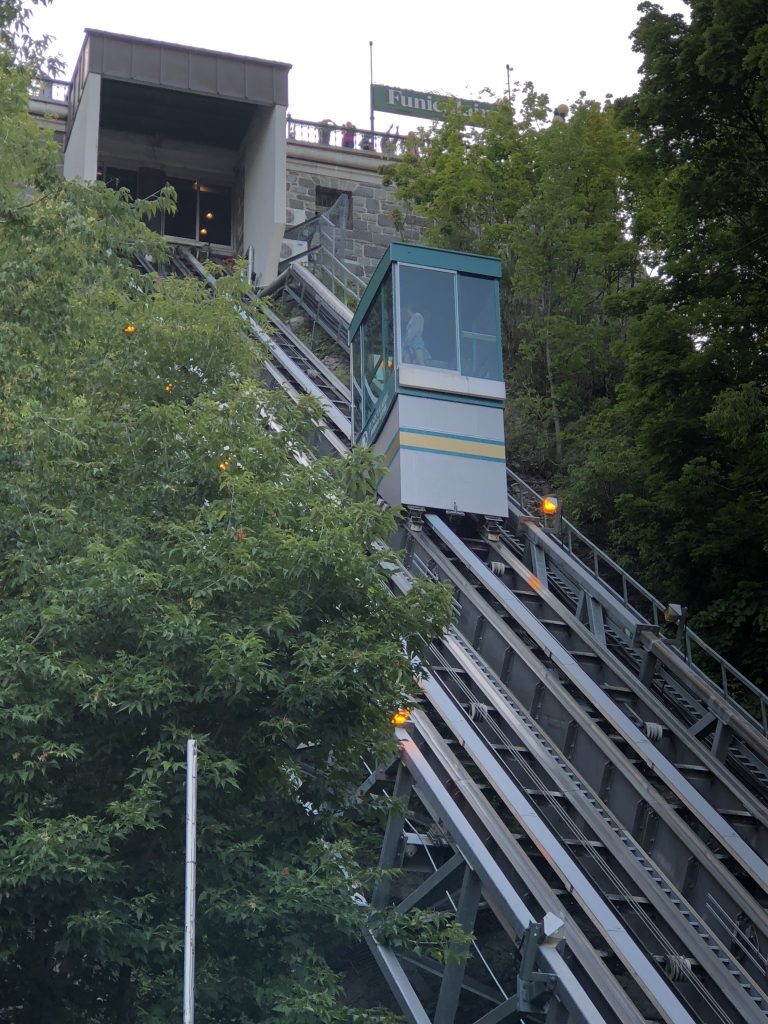 There is a funicular going down to the lower city, except it isn’t really a funicular. Each car travels independently, so no counterbalance. Originally, This was enclosed and used for merchants to get things from the top, which is where most of the city is, down to the businesses here. As tourism grew, they opened it and made it a tourist attraction. So now the food merchants have to navigate the stairs to get supplies… really, we saw it happen. 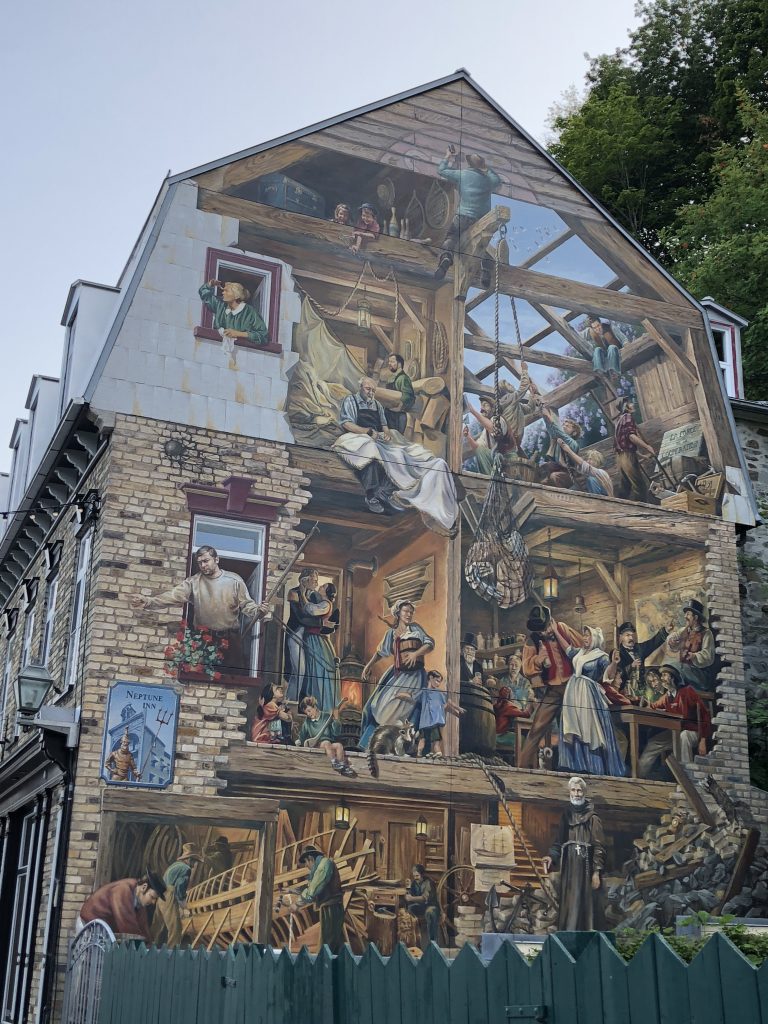 There were a number of great murals, not as many as Montreal, but fun to see. This is right next to the funicular. In the open area is a memorial to Joliet, he and Father Marquette left from here to explore and discovered the upper midwest and the Mississippi River. Which explains why the names Joliet and Marquette are scattered throughout.  They lost all thier diaries from their first trip, which prevented others from following in their footsteps. Joliet disappears, I had heard in Chicago that he was killed by Indians, but here in Quebec they didn’t want to say. 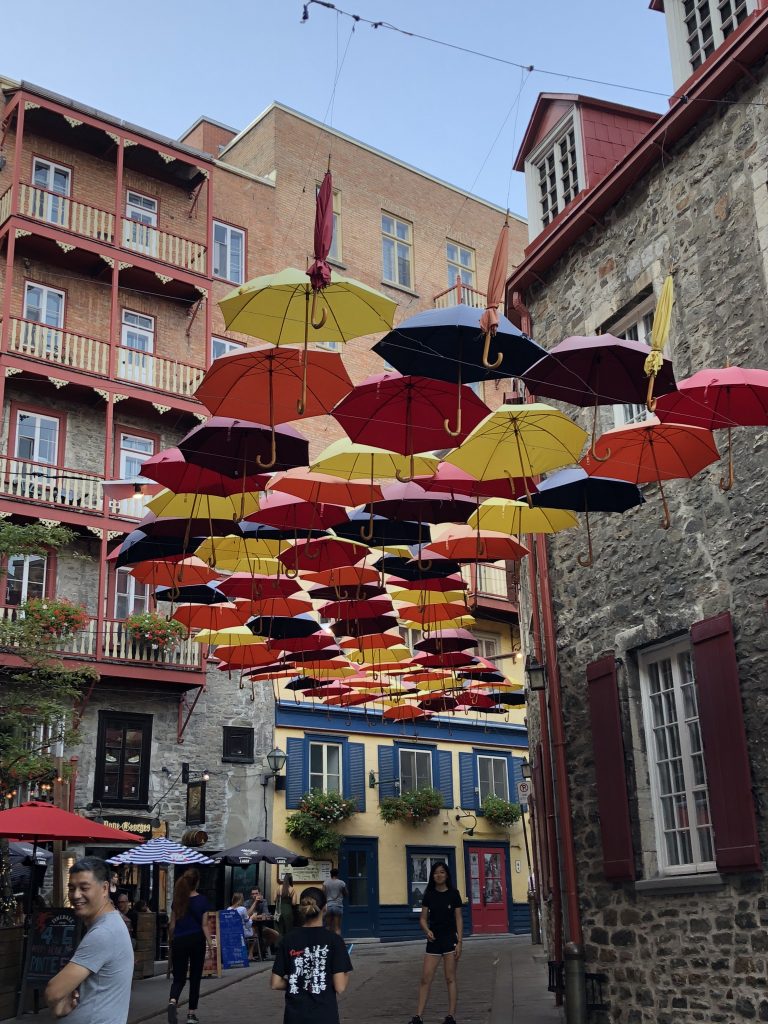 The streets down here are fun, full of restaurants and very nice businesses, sure an occasional t-shirt shop, but mostly nice shops. 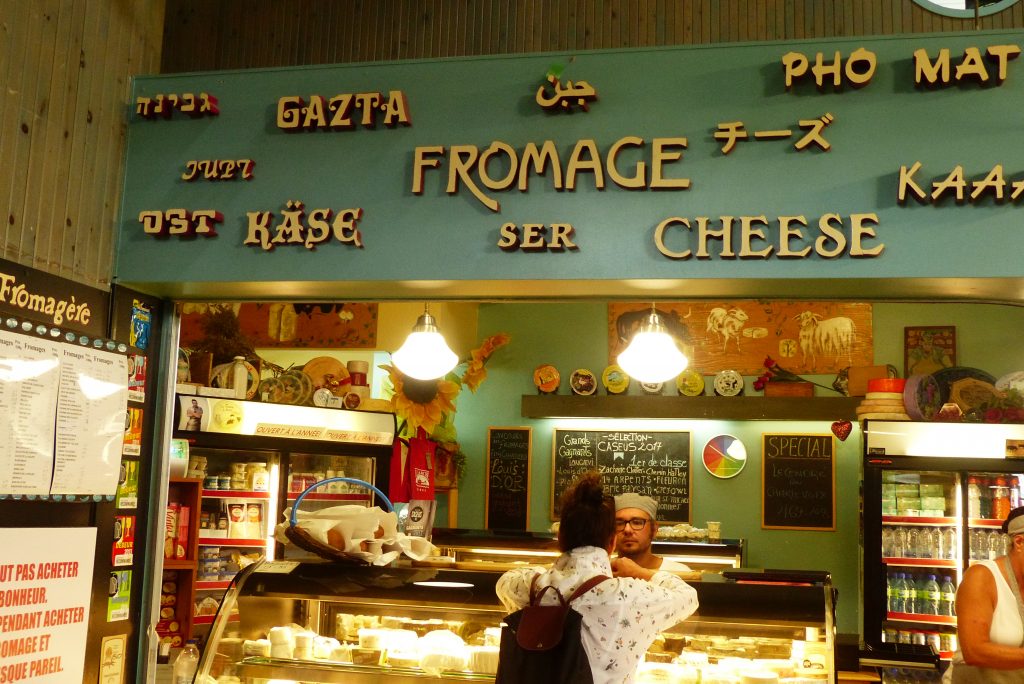 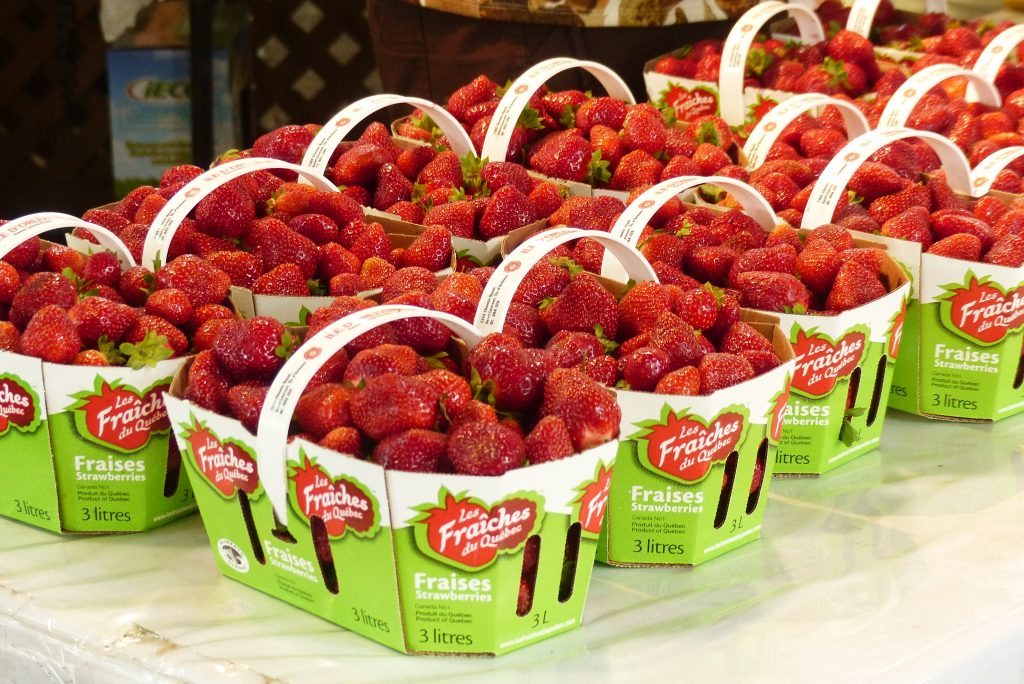 We went into the covered market, were very happy to see Hebrew. We ended up buying some croissants and blueberries that we had for breakfast. The blueberries were amazing! Not like the ones we get here.

And now for some architecture. 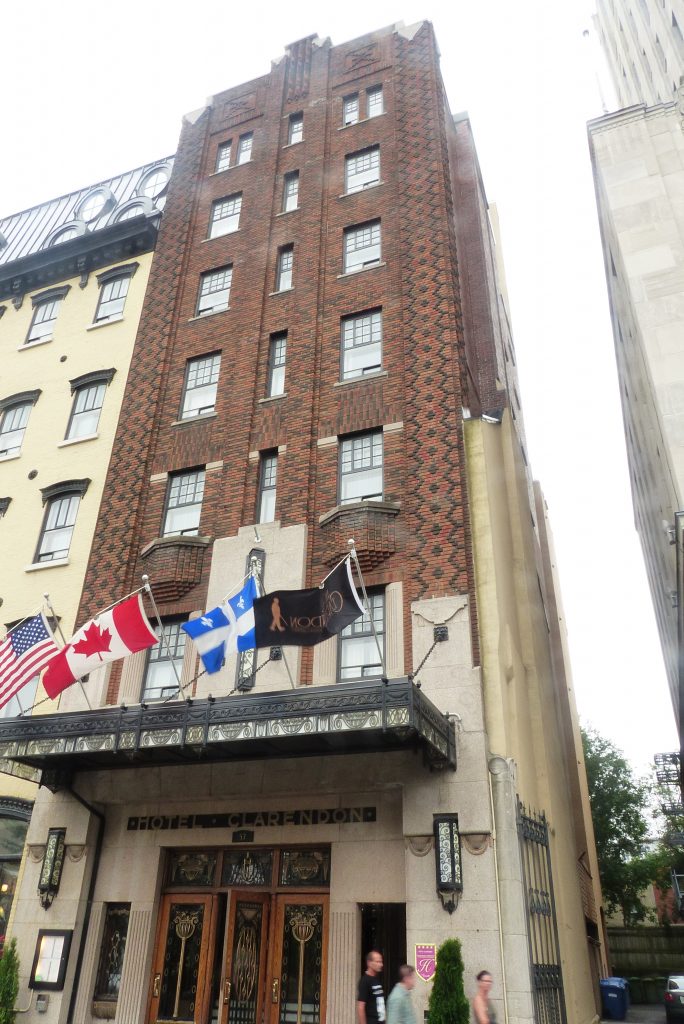 The Hotel Clarendon, the first hotel in Quebec. (well, the first to survive a fire, have I mentioned that fire was the biggest enemy in any city?)  This is Art Nouveau, which is why Quebec has more in common with Europe than most North American cities. This is a European style, that didn’t really make it here. Maybe because of how expensive it is to create these intricate designs. 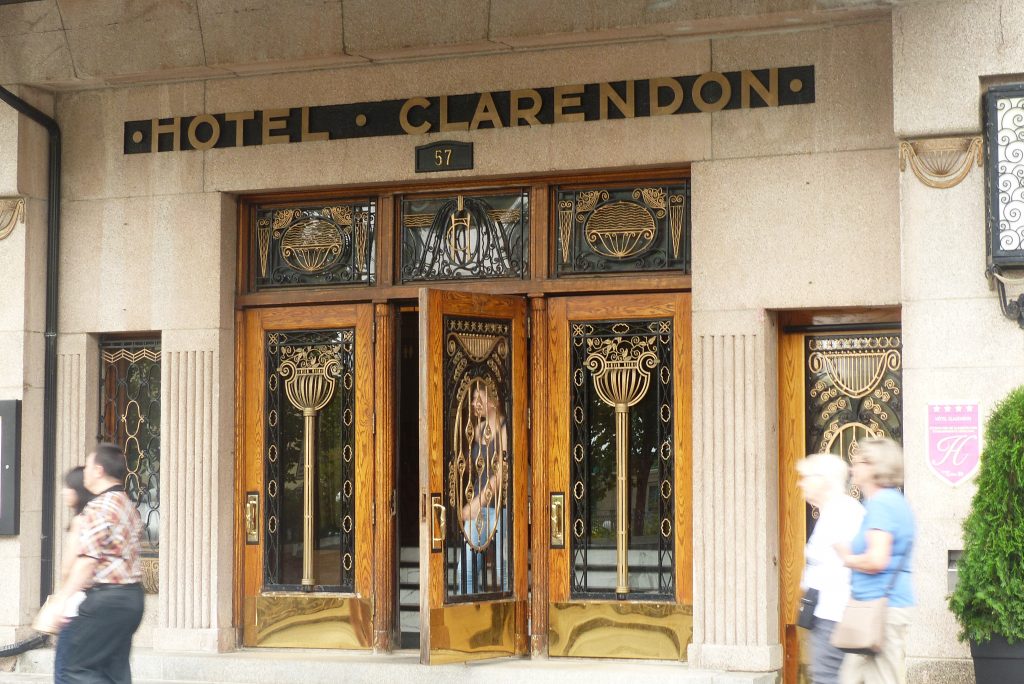 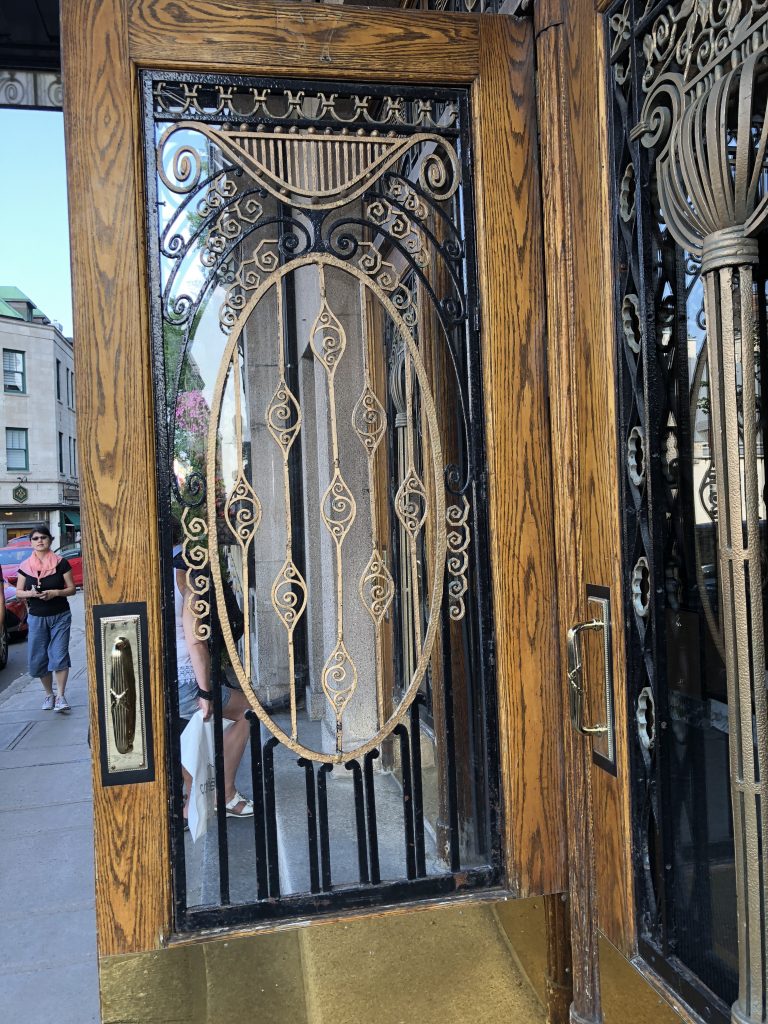 There are quite a few metal workers who would love to have this kind of commission again.  Unless it’s a very wealthy private estate, I don’t see any builder willing to pay the price. 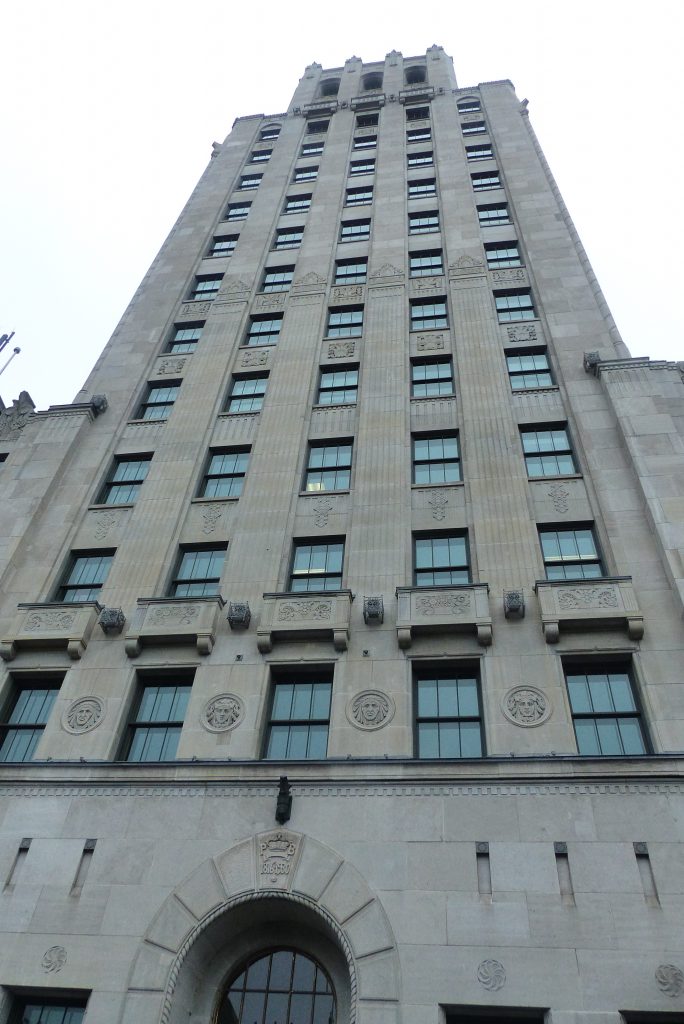 This Art Deco is right next door! How cool is that! The new style next to what it replaced. Today this is also an hotel, although originally it was an office building. There are a handful of other Art Deco buildings in Quebec. By the 1920’s the businesses and building was happening in Montreal, which is where we are going next.